Thiruvathirai: The Dance Of Shiva At Every Level 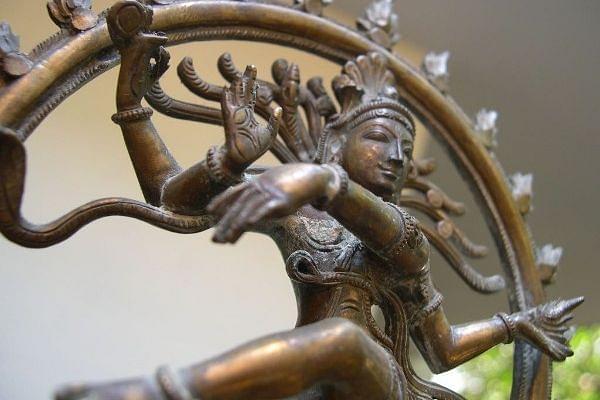 Today is Thiruvathirai — the day of the Cosmic Dance of Shiva.

The legend of the Divine Hunter has a Puranic encoding of astronomical lore and can be traced back to Vedic times.

Recently, archaeologist and statistician Julien d’Huy created an equivalent of a phylogenetic chart of 93 mythemes or myth-components of 47 versions of the Cosmic Hunter Myth — that of the hunter and the stag in ancient sacred traditions across the world.

He concluded that the core element of this sacred narration is 15,000 years BP. Significantly, he did not include in his analysis the most continued living tradition of the divine hunter and the stag — Rudra shooting an arrow at Prajapati.

A stone etching from Burzahom, Kashmir, which has been dated prior to 2,000 BCE shows a hunter with two suns and a stag.

Among other interpretations, it is also possible that this may be associated with the Puranic episode of Rudra shooting his arrow at Prajapati. (‘Origin and Growth of Astronomy in Indian context’, p.41)

It is through this primordial event that Rudra gets associated with the star Arudra.

In an innovative study of Nataraja iconography, Deepak Bhattacharya and Nayak, say that the divine icon also acts like a celestial compass, in that it 'incorporates the region of the Orion and as well the entire span of the night sky'.

In their paper, they show radial patterns spanning out, which appear to be star maps when the navel of Nataraja is taken as Arudra or Betelgeuse (α Orionis).

The most interesting aspect is that the celestial pattern seemed to have been incorporated into temple plans and are also enshrined in the Nataraja image.

Researcher Willard Van De Bogart of Bangkok University, based on the work of Bhattacharya and Nayak, also relates the cosmic significance of Arudra to the 'swing ritual' related to Shiva in Thailand as well:

The discovery was made by showing how alpha Orionis (Rudra-star Betelgeuse) moves away from the ecliptic and celestial equator, now at 7 degree north of the equator. In 60 more years, Rudra will move south of the equator and be closer to beta-Orionis (Gouri -star Rigel) in the Gemini asterism as it begins to move north... These findings and others came from noticing how the temple complexes at Bhubaneswar were built to reflect the position of the stars... The swing could have acted as a celestial dial with the arms and legs of Lord Shiva (Anirudha — a synonym of Shiva) fixing a centre place in the universe among the stars (much like the Stamba) but using alpha Orionis as the centre.

The Giant Swing ( Lo Ching Cha ): Brahmanical Origins and Its Significance to the Religious Culture of Thailand

From the Vedic-Archeoastronomic dimensions to the later Puranic narrative, we find Shiva taming the ego of the ritualistic seers.

The Puranic rendition of the Cosmic Dance of Thiruvathirai is that when Shiva tamed the ego of the Daruka-Vana rishis, he slayed the tiger they set on him and made its skin his waist robe.

The elephant set on him, too, was killed. And snakes became his ornaments. Ultimately, the Asuric dwarf, Muyalaka, was trampled by Shiva, who set his right foot on the dwarf and started his cosmic dance.

Thiruvathirai was the day he revealed that Cosmic Dance. Patanjali and Vyaghrapada on this day performed austerities and obtained the vision of the Cosmic Dance at Thillai.

The symbolic significance of the various ferocious animals, poisonous snakes and ultimately the ego-dwarf cannot be missed out.

Shiva tames all emanations from the ego trip of the seeker, ultimately stepping upon the egoistic outward-looking dwarf, Muyalaka.

It is quite interesting that the Muyalaka is made to look outward — as the ego never sees within.

Yet, for those endowed with the vision of wisdom, what the dwarfed ego feels as the weight of the Lord's right leg, becomes the dance of Cosmic Bliss.

The entire existence, which would otherwise be a suffering and unbearable weight for the outward-looking ego, becomes nothing but bliss for those with true vision.

The Saivaite tradition has it that Senthanar, who started his life as an accountant, had set out on a spiritual path and had come to Chidambaram, where he lived as a poor woodcutter who would sell fuel-wood daily, get rice and then would first feed a devotee-mendicant of Shiva.

Then, there came a Saivaite mendicant who asked for food. Senthanar, who could not purchase rice that day, made pudding out of finger-millet — a preparation that usually the economically poor consume.

The mendicant had all the pudding and then some more. Next day, the Deekshitars, the traditional priests of the Chidambaram temple, on opening the sanctum sanctorum, found finger-millet pudding splashed all around the deity with pudding on its mouth as well.

Shocked, they reported to the king of the province, who had already had a dream in which Shiva had told him of the great devotion of Senthanar. This day happened to be Thiruvathirai.

When the deity was then put on the ceremonial ratha and pulled, the ratha refused to move.

A divine, disembodied voice from the heavens informed the assemblage that the ratha would move if Senthanar would come and sing praises of Shiva.

The hymns he sang made the ratha move and are part of the ninth Thirumurai — the sacred books of the Vedic Saivite tradition of Tamil Nadu.

To honour this event, to this day, finger-millet pudding is made and offered to Shiva on Thiruvathirai.

Thus, like all Hindu festivals, which have significance at multiple levels, Thiruvathirai, in its expanded meaning, has cosmic, psychological and social imports.

Whether it is social harmony, the awe of the night sky, or the inner journey for enlightenment and liberation — Thiruvathirai tells us this — that everywhere, one can feel the Dance of Shiva.