‘What About Khajuraho’ Is A Nonsensical, Dishonest Argument For Kissing Scenes In Temples 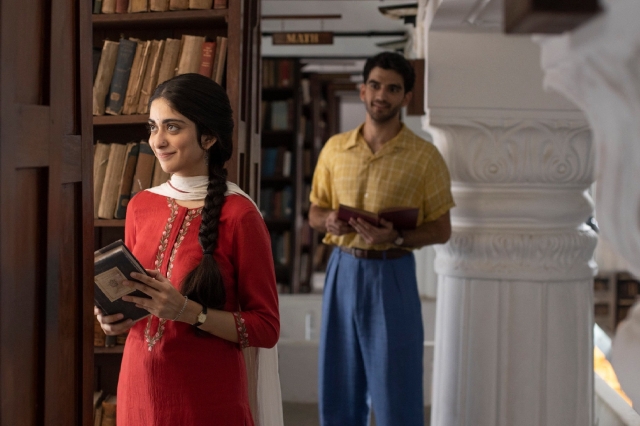 A still from the web series A Suitable Boy

Streaming platform Netflix was recently embroiled in a mild controversy when an FIR was filed against two of its executives for hurting religious sentiments by showing a couple kissing in a temple.

The complaint was given by Bharatiya Janata Yuva Morcha national secretary Gaurav Tiwari, who also called the scene as encouraging “love jihad”. In the series A Suitable Boy, a Hindu woman named Lata Mehra and her Muslim friend Kabir Durrani are shown kissing in a temple.

The series is based on a 1993 novel by Vikram Seth by the same name. The fiction novel, however, has no such episode. The couple does kiss, but not in a temple.

The scene was shot in a temple of Lord Maheshwar in Khargone district in Madhya Pradesh.

Narottam Mishra, home minister of Madhya Pradesh state, has supported the complaint. “To me there is nothing suitable in that. In our temple, if you are filming a kissing scene, Rama music is on in the background, I do not consider it good,” Mishra said at a news conference.

Experts say Netflix is not likely to face serious legal trouble from the FIR, which is filed under IPC section 295 (malicious acts to outrage and insulting the religious feelings and beliefs) of the IPC. Media and commentators however are in full force criticising the complaint by Tiwari.

The most common argument is that the complaint is a result of growing Hindu extremism that ignores the fact that Hindu temples are themselves centres of erotica. Look at Khajuraho.

Among publications that cited Khajuraho to justify the temple kissing scene included The Times of India and National Herald, and some other portals like this and this.

Well, the argument is stupid and dishonest.

The commentators are suggesting that only because some carvings on the Khajuraho temples show sexual postures, kissing in temples should be treated as the norm.

An immediate counter could be: some of the carvings also show humans indulging in penetrative sex with animals. Should that be treated as the norm too?

The fact is, what’s depicted on the walls of the temples is not a religious diktat or lifestyle guide for Hindus. If it was and if Hindus bought into the message, then temples across India would be havens for couples for not only kissing and making out, but also for sex. And bestiality would be common among Hindus. Instead, it is more common in almost all-Muslim Pakistan.

On the other hand, some of the most-visited temples - visited for purposes of worship and not sightseeing, that is – are places where devotees observe piety and restraint. Queues for men and women are generally separate, and all devotees – be it men or women – dress up modestly and avoid using crass language or bad behaviour.

By all assessment, this is the dominating ‘culture’ in Hindu temples, and not what’s seen in some figurines on Khajuraho walls. If this was not the case, why would Bollywood actors who make a living out of on-screen sensuality and sleaze, cover their bodies and heads in their customary visits to Siddhivinayak temple ahead of their films’ releases?

The meaning and purpose behind the sculptures on Khajuraho temples, that are said to have been built by the Chandelas between 950 and 1050 CE, are themselves a matter of debate.

Some say the carvings represent tantrik tradition, some say they ask the devotees to leave their lust and desires behind before entering the sanctum sanctorum while some others say the women depicted are devadasis, today considered an exploitative practice.

No version says that the carvings depict the norm of its era, that is, it was a normal Hindu thing to have sex in public view in those times.

Complaints against shooting of intimate or violent scenes in temples suggest growing awareness among Hindus that their places of worship are selectively used by filmmakers.

It’s open knowledge that the same filmmakers go extra lengths to ensure they perform no such stunts at dargahs or mosques.

Twitter handle @gemsofbollywood has posted several clips from mainstream Bollywood films that show how filmmakers have had a free run showing lust, greed and crimes in temples and very selectively so.

In web series A Suitable Boy, Maan compares the building of a Shiva temple to the erection of penis of the king who is building it. The original novel on which it is based, has no such dialogue.

Maan jokes to his friend Firoz, âWe are witnessing the erection of the Rajaâs Lingamâ - a derogatory reference to a Shiva temple that the Raja is building

In tweet below, also see how @MiraPagliNair deviated from the bookpic.twitter.com/6T1WeoBMQh

In recently released Laxmii featuring Akshay Kumar, protagonist Asif vandalises a temple in a bid to kill the villain.

Laxmii was a remake of Tamil film Kanchana, but deviated from the original in its depiction of the temple scene. In the original, the protagonist first takes permission from the temple deity and then decides to kill the villain outside the premises to maintain the sanctity of the temple.

In film Kuch Kuch Hota Hai by Karan Johar, Shahrukh Khan and his minor daughter are shown giggling and winking at each other when made to sit in the home temple by his aged mother. But when the Hindu girl is reading namaz, both the visuals and the music are serious.

Hindu worship is for timepass. It doesn't help in any way. Wink at Krishna, giggle, have Masti yaar.

Hence Hindu kids must be taught Namaz so that they can perform miracles in crisis, by invoking Allah and Rasul.

In film Judaai (1997) featuring Anil Kapoor and Sridevi, actor Johny Lever is shown lusting after a woman doing puja at a temple.

In 1993 film Phool Aur Angaar, villain named Kaalicharan rapes a woman in front of a temple saying “this is happening by god’s will”.

"This is happening by marzi of Bhagwan" - says Kaalicharan (played by Firoz Khan) before gangraping Mithun's sister to death in front of mandir while she begs Bhagwan for help.

Can you list what all is disturbing in this clip? pic.twitter.com/XD6hfLWNYK

We recall no scene where the hero vandalises a mosque, where a sidekick lusts after a woman performing namaz, where a romantic couple kisses in a dargah or where a villain rapes a woman at the gate of a mosque saying it’s happening by Allah’s will.

On the other hand, makers bend backwards to appease any mosque or dargah post-bearers if they object to any kind of depiction of their premises.

Makers of film Namastey London readily deleted a scene featuring Katrina Kaif in the Khwaja Moinuddin Chisti’s dargah in Ajmer, after khadims said that her knee-length dress was too short. The scene was about Katrina’s parents in the film offering a chadar at the dargah.

It’s pertinent to mention here that key post-bearers at the same dargah were key accused in the infamous 1992 Ajmer sex scandal, but We found no angry editorials saying “The skirt that offends but the rapes that don’t” in the Namastey London case on the lines of what we are seeing in Netflix case.

This is despite two major differences: One, in Namastey London, the scene showed a woman joining her parents in prayers and not kissing a man inside the premises, let along a Muslim woman kissing a Hindu man.

Two, makers promptly deleted the ‘objectionable‘ scene while Netflix has not even responded in the fresh matter.

Makers of Tannu Weds Manu featuring Kangana Ranaut cancelled their plan of shooting a scene in Moorish mosque of Kapurthala in Punjab after protests by local Muslims who said that shooting inside mosques is against the tenets of Islam. The order of cancellation came from Kapurthala deputy commissioner. Far from a love scene, the makers had only intended to shoot a market scene.

‘What about Khajuraho’ thus cannot be an acceptable explanation by filmmakers on why they treat Hindu places of worship differently than Muslim or Christian ones. To justify any kind of film scenes in mosques and dargahs, one can easily quote maulvis citing holy Islamic texts for sexual fantasies or point to sleazy Arabic music videos created in Muslim-dominated nations or real videos of molestation of women inside the premises.

No filmmaker has attempted to visually depict Prophet Muhammad as it is considered a strict ‘no’ today and can trigger violence. However, if one wanted, one could always argue that historically, there have been several graphic depictions of the founder of Islam.

If logics and arguments could settle such debates, that is.

An honest explanation would be fear in the former case and lack of it in the latter. Perhaps the filmmakers themselves don’t realise how much they fear the Muslim backlash given that they have rarely tried any stunts.

If some Hindus now feel that the same tactic would keep filmmakers away from shooting lust and crime scenes in temples, can one really blame them?