What Exactly Happened At Sringeri Math In April 1791? 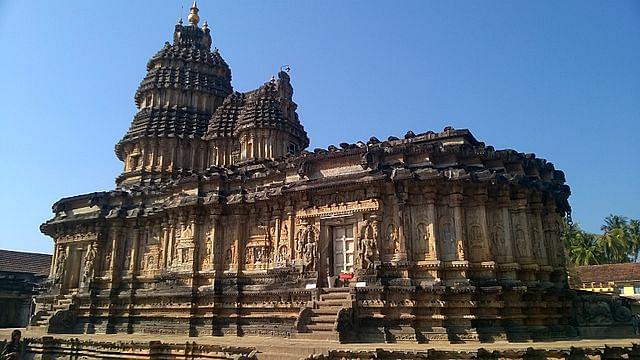 Tipu’s moves are not good. He is full of arrogance. Recently Nur Muhammad received a letter from Tipu that he converted 50,000 Hindus including women and children to Islam, no Padishah or Vazir did it in the past, with God’s grace he could. He converts entire villages.’-Letter from Nana Phadnis to Mahadji Scindia, 5 September 1784.

A famous Thomas Daniell- James Wales painting of the Shaniwar wada darbar shows Charles W Malet, the English Resident at Pune, signing a treaty with the Marathas. The painting was specially commissioned by Malet to show his pivotal role in forging the alliance. The diplomatic challenge he faced in bringing the Nizam and the Marathas to join the English against Tipu Sultan should be seen in the context of the alliance against the English just a decade earlier. At that time Hyder Ali was a Maratha ally; in 1790 Tipu had so antagonized his father’s former allies that they chose to join the English.

In the course of the 1790-1792 campaign against Tipu, the Sringeri Shankaracharya math was attacked, looted and desecrated by a raiding party attached to the army of Maratha chief Raghunath Rao ‘Dada’ Kurundwadkar. The stigma of this attack has lingered to this day and the Marathas as well as Parshuram Bhau Patwardhan, who held overall command, have been held responsible. The Maratha letters of 1791 have eluded many commentators not familiar with the language and these throw a different light on the sordid episode.

Since 1774, during the nine year war with the English and later, the Marathas had lost territory to Hyder Ali and Tipu between the Krishna and Tungabhadra rivers. Tipu attacked Maratha territories while indulging in talks with the Marathas and in 1784-5, Vyankat rao Bhave, the chief at Nargund and his diwan Kalopant Pethe were imprisoned and marched off in chains. Pethe died in Tipu’s prison. The same year in a letter to his agent Nur Muhammad, Tipu boasted he converted ‘fifty thousand Hindus including women’ to Islam in just one day. Dharwad was captured. Many fair ladies were taken away into Muslim harems.

There was considerable disquiet at Pune over Tipu’s aggression. An anguished Nana Phadnis asked Holkar to join Parshuram bhau and the Marathas began their campaign against Tipu in 1786 and took the fort of Badami. Nana and Charles Malet were present at Badami. After Nana returned to Pune, Tukoji Holkar and Parshuram bhau signed a treaty with Tipu who agreed to pay a tribute of 48 lakh rupees. Prisoners were also exchanged.

Although Nana’s request for English help in 1786 was not accepted by the English in 1790, the English were anxious to obtain Maratha help against Tipu. By 1790, a co-ordinated strategy was put in place. Lord Cornwallis took the field against Tipu and reached Chennai. The Marathas left Pune with an army under Hari pant Phadke, followed by another led by the Patwardhan brothers; Parshuram bhau and Raghunath rao ‘Dada’. The Patwardhans had borne the brunt of Hyder and Tipu’s aggression and lost many of their family in these wars.

Parshuram bhau promised to join Cornwallis for the main thrust towards Srirangapatnam, but in his mind he accorded higher priority to winning back territory lost in the previous decade. On 6th April 1791, after months of siege, Parshuram bhau captured the fort of Dharwad, crossed the Tungabhadra and joined Raghunath rao at Harihar. Raghunath rao then captured the fort of Mayakonda and Chengiri further south.

Around this time a letter from Neelkanth Appa (father of Raghunath rao Dada) to Balasaheb at Miraj gives the first intimation of an attack on the Sringeri math. The letter says-

…lamaan and pindaris from Dadasaheb’s army went and looted lakhs worth from the Sringeri math, including an elephant. I have written to Dada to confiscate the goods’. This was followed by another letter in mid April; ‘the looters have been apprehended and a jambura and elephant belonging to the math taken over. The principal ten or twenty culprits were arrested. Just then Dadasaheb wrote that he will take action against them as they are his men. The men and the elephant were then sent to him’. On 14 May, Trimbak rao, Raghunath rao’s son, wrote to his uncle at Miraj, ‘Before the army crossed the river Tunga, lamaan and Pindaris had reached Shimogga. They went and looted the Swami’s math at Sringeri. The danda (staff) and kamandalu (vessel) of the swami was also taken. Nothing was left. Women were assaulted (and raped). Many women committed suicide. The Swami’s idol, linga etc was looted. The elephant stable was emptied and brought by the lamaanis. The Swami performed austerities and fasted for five days, giving up his life…

The last about the Swami giving up his life was not correct. The letter goes on to state, ‘When father learnt of this loot, he sent the cavalry to arrest the lamaan. The elephant was taken over. Remaining stolen items have not been found’.

The matter continued to fester and reached the ears of Nana Phadnis at Pune. A letter from his clerk reached Raghunath rao in December 1791. The letter said-

…lamaans and looters looted the Sringeri math; this news reached the court. All details must be sought. You wrote ‘the looters came from all four directions. You have taken action and others must similarly act against the culprits’. Nana has sent this reply, ‘The Swami’s math was looted and the Swami is therefore fasting. This does not auger well for the kingdom; the Swami’s displeasure is not good….. Taking stern action the Swami must be compensated and his pleasure solicited….

The pindaris in the Maratha army and the Bayed troops in Tipu’s army were irregular troops that performed mopping up operations after a battle. They were not paid and made a living out of loot collected. In a letter of 24 April 1792 written on behalf of Lord Cornwallis, the Governor General, states-

….he paid no attention to from considerations of the irregular and depredatory system in which the Bayde Horse of Tippoo’s state and the pindary horse of the Mahratta armies were employed without any check or control, that from the nature of those horse the march of armies thro’ a country was always attended with circumstances of this description, that he was confident… that these matters will be considered as temporary inconveniences….

Tipu is in Kanchi and desultory talks are on. He is not at all harassing the ryots. Cornwallis is in Chennai and preparations for a war are on from both sides. Hyder Ali had begun work on a gopurum of a Kanchi temple in the early part of his reign. Tipu has now ordered its completion. Tipu also sanctioned the chariot utsav and attended fireworks during the annual festival at Kanchi.

Tipu ordered Brahmins to conduct austerities to propitiate the Hindu Gods at Srirangapatnam. A letter from Haripant Phadke writes-

Rangaswami and Shivalaya temples have Brahmins performing austerities on Tipu’s orders. One sits in the water, forty Brahmins perform another kind of austerities. He has taken the Sringeri swami there. He is on a fast. Tipu is requesting him to be at ease and he will set things right. He gave him gold idols and forty thousand rupees to feed the Brahmins.

Another letter says, ‘Apaji Ram is pleading for a treaty’.

The allies finally surrounded Srirangapatnam in February 1792. Cornwallis was keen to destroy Tipu’s power but the Nizam and Hari pant, the Maratha commander, only wanted to subdue him. However Tipu fought back fiercely and Hari pant praised both the English and Tipu for such a battle. ‘The English were tired fighting, so a treaty was agreed upon’, says Hari Pant. Parshuram bhau reached Srirangapatnam after completing the conquest of Bidnur and the entire region north of the Tungabhadra on the day Tipu’s sons were sent hostage to Cornwallis.

The Sringeri episode was neither a policy nor a battle plan for the Marathas. It was carried out by those predatory troops and lamaans (a caste dealing with grain) who do not take part in an actual battle. VV Khare, the historian who collected a huge collection of letters writes that the Sringeri math seemed a safe repository for all the rich in the region as the Marathas being Hindus and led by Brahmin commanders would not harm it.

Although the regular troops did not attack the math, the pindari who did not act with ‘any check or control’ did. The Maratha polity was anguished over the act and efforts were on to compensate and appease the Swami for nearly a year after. In 1791, Tipu seemed to have changed his approach to temples and Brahmins when faced with an all round attack. Due to past excesses, Tipu’s vakeels were denied an audience by the Maratha chiefs in the run up to the siege of Srirangapatnam. The Maratha letter writers remark on Tipu’s acts as they were uncharacterisitic of him.

The interpretation of History at any time is a risky proposition to say the least. Events in our own times are also represented differently. The Sringeri math attack was not representative of Maratha goals, policy or plans. Equally Tipu’s new found piety for Kanchi’s temple in 1791 was born out of political necessity. Present day readers need to take both events in the context they occurred.