What We Should Meditate On This Aadi Perukku 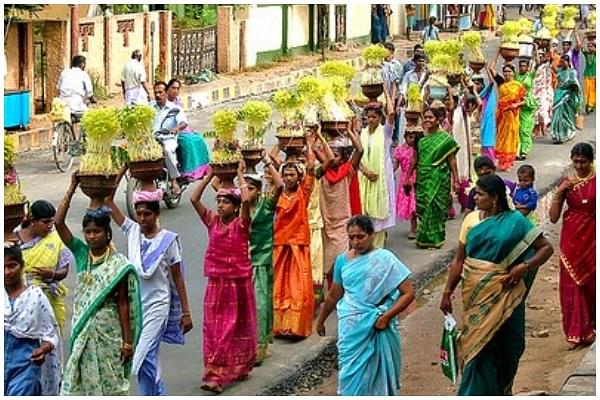 Aadi Perukku or the joyous rushing of the river Cauvery, one of the seven sacred rivers of India, is an occasion for celebration for the Hindus of southern India.

The copious flow of the river signifies the heralding of prosperity and abundance. The waters bring in wealth that is Shri. Shri or Thiru in Tamil is the goddess of wealth — wealth that comes from occupations that bring harm to none and happiness to all. It is wealth that is produced without what the environmental economists may call as the 'externals', as much as possible.

In fact, it is thiru or shri which should adorn the rulers, according to Hindu view of life. While in other cultures, it is the divine right of the king to rule, in Hindu culture it is the sacred duty. The ruler should strive to produce wealth without harming anyone. When adorned with such thiru, a ruler emanates the attributes of the divine.

Cauvery brings that thiru in her waters to Tamil Nadu.

The puranic tales of the origins of Cauvery is quite significant here.

Shiva promised Agastya a vision of the divine marriage and told him to head south for penance. As Agastya prepared to depart, Shiva took the scared river out from his matted locks and commanded Cauvery to start flowing in the direction Agastya indicated.

Agastya contained the Cauvery in his kamandala and started performing Shiva pooja at Kodaku hills in southern India.

Meanwhile, a severe drought swept through the region. At Seerkazhi, home to a famous Shiva temple, Indra was engaged in Shiva pooja and he was depressed at the sight of the famine. Even his Nandavana — from where he plucked flowers for pooja, was suffering from drought. When Indra was thus in despair, Narada approached him and advised him to pray to Ganesha.

Ganesha, happy with the worship of Indra, decided to help him and southern India. He took the form of a crow and toppled the kamandala of Agastya, and the rishi, while trying to shoo away the crow, pointed his hand towards the south.

Cauvery, remembering the words of Shiva, started flowing in that direction. As an angry Agastya looked on, the crow took the form of a Brahmin boy. Enraged, Agastya got hold of the boy and gave the boy a few knocks on his head and lo! There appeared Ganesha.

Agastya was filled with grief and guilt. He asked Ganesha to forgive his mindless act. Rather than getting angry, Ganesha recognised the act as a form of worship and blessed the sage. He asked the sage to go further south to Podigai and continue his tapas. He told him that anyone who worships Ganesha should tap their temple and do ‘thopu-karnam’ (hold the earlobes with hands crossed in front of the chest) which would help the bhakta remove the ignorance of egotism and proceed in the path of enlightenment.

This puranic episode, well known to every Hindu child in southern India, contains lessons for the collective psyche of India today. When Shiva gave Agastya the waters of Cauvery, the sage contained it in his own kamandala, and by doing so, he contained the natural flow of the river which could benefit humanity and all life forms, for his own spiritual pursuit.

When the rivers are held back for ulterior motives, then the thunderbolt of Indra strikes. When rivers are held out of innocent selfishness, without aiming to hurt anyone, then the divine will topple the kamandalas.

Wealth happens when there is flow. Stagnation causes drought and misery. Even if what contains the flow is the kamandala of Agastya, the result is famine and hardship. Then no pooja can increase punya, and whatever material affluence comes, cannot be shri or thiru.

Both have lessons for modern India.

It is pertinent here to remember along with this puranic wisdom, the wisdom of Bodhisattva Ambedkar, when he said as early as 1944 that the forests and rivers should be the concern of the central government.

Today after a long time, Indian Railway lines are beginning to synchronise themselves with the sacred geography of India. Unfortunately, petty politics of linguistic states and artificial sub-national identities are destroying the sacred geographical unity of the waterways of the country.

From our puranic stories to the words of Bodhisattva Ambedkar, there is a lot of wisdom for modern policy-makers and people at large to meditate upon.

This Aadi Perukku has let us reflect upon that.