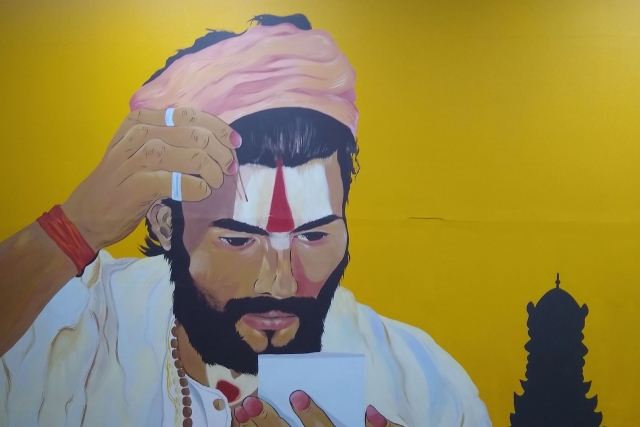 In December, over 50 volunteers associated with Sanskar Bharati, cultural wing of Rashtriya Swayamsevak Sangh (RSS), set out on an arduous expedition from Prayagraj. With their kalash filled with holy water from Triveni Sangam (the confluence of three rivers), they began heading out to various parts of the country as part of Ganga manuhar campaign. They were tasked with inviting India’s 151 perennial rivers, big and small, to the 2019 Kumbh Mela on behalf of the mother of all rivers, Ganga.

As the volunteers reached their destinations, they offered kalash filled with water from the sangam to these rivers. Their fellow Sanskar Bharati swayamsevaks and locals in these areas welcomed them and accepted the invitation to visit the Kumbh Mela carrying kalash with waters of these rivers.

Those invited have now arrived in Prayagraj as representatives of the rivers of India. These groups, each comprising of 10-15 members, carried out a procession today (11 January) walking upto the sangam in their traditional folk attire.

“A small quantity of water from all rivers that these pilgrims have brought was mixed into one kalash and offered to Ganga. The remaining water in kalash (each kalash identified with its river name) will be kept in the mela area for darshan until the Kumbh is over. This collection will be worshipped daily with archakas (priests) performing aarti every day,” All India secretary of Sanskar Bharati, Amir Chand, told Swarajya.

Sanskar Bharati was directly involved in ideation and execution of this innovative nationalist project.

It is also setting up a vast cultural complex in the mela exclusively for the northeastern states where the cultural attributes of the eight states of that region will be at display in a museum along with their historical linkages with the rest of the country. “Various parts of the country share rich cultural and historical relations with the North-East going back centuries. This memory hasn’t been erased but certainly faded with time. In this Kumbh, we will not only celebrate their culture but also underscore our unity in diversity,” Chand says.

An eight-week long programme has been curated, each week dedicated to one northeastern state. Debates and discussions are also planned on issues concerning each state. Some noted personalities from all northeastern states have been invited for the same.

Sanskar Bharati is also directly involved in convening Sanskriti Vidwat Kumbh, a three-day gathering of over 500 intellectuals from different walks of life. Prominent people such as Padma Vibhushan awardees Sonal Mansingh, Pandit Jasraj, celebrated author and doyen of Hindi literature, Narendra Kohli, filmmaker Subhash Ghai and many renowned personalities will be in Prayagraj to take part in the gathering on 12, 13 and 14 February.

Dharma gurus, priests and religious leaders of various sampradays (sects) will also participate in lively discussions and hold debates over important matters related to culture, religion and civilisation. Priests from tribals areas from over 25 states will also be present. Sewa Samarpan Sansthan, a Hindu organisation based in UP’s Sonbhadra district and which works for upliftment of tribals, is playing a crucial role in this.

The priests from tribal areas will interact with other noted Hindu dharma gurus and cogitate on various aspects of dharma and society. Special arrangements have been made for their shaahi snan in sangam. Apart from the priests, Sewa Sansthan is planning to bring in 50,000 tribals for Kumbh darshan. The Uttar Pradesh government is starting a special bus service for their convenience.

That’s not all. Many ideas presented by RSS affiliate organisations to the Uttar Pradesh government are being executed as well. “We are an organisation of ideas. So, we have contributed a lot in the form of ideas. Our view was that since a world organisation like UNESCO has declared Kumbh an intangible cultural heritage, we should make sure this heritage is visible to anyone who visits Prayagraj during the mela. The government did this through its ‘Paint My City’ campaign,” said an RSS official who didn’t wish to be named.

Deputy Director, Information, in the Uttar Pradesh government Dr Sanjay Rai told Swarajya that various artists from different parts of the country visited Prayagraj and took part in this street painting campaign. “Under this beautification project, over 20 lakh square feet public place area (flyovers, walls, government buildings, etc) has been painted all over Prayagraj city,” he informed. The campaign, through street art, aimed at not just making the city beautiful but also tell many stories - those of our cultural heritage in general, and the Kumbh in particular.

Vidya Bharati, the educational wing of RSS, has its own plans for the Kumbh. It has millions of students in its chain of thousands of schools. The eastern Uttar Pradesh wing of Vidya Bharati has decided to bring thousands of poor and destitute children studying in its schools in Awadh (Ayodhya) and Goraksha (Gorakhpur), to the Kumbh mela. The organisation will bear the expenditure of their stay, food and travel.

Many organisations who aren’t officially part of RSS but could be termed as its ideological fellow travellers are also playing a constructive role. A nationalist trust, Sanskritik Ganga Nyas, is working to take the message of Kumbh to those sections of intelligentsia which don’t have charitable opinions about anything saffron. These overwhelmingly come from art, culture, cinema background. In collaboration with Uttar Pradesh tourism department, Nyas organised two conferences - in Mumbai on 5 September and in Delhi on 7 January – to reach out to many influential personalities of different fields.

For the first time in Kumbh, the government has constructed four huge convention halls with seating capacity in tens of thousands. Earlier, there used to be only one such avenue. In these, there will be daily tribal, folk and traditional dance performances showcasing cultures of all parts of India and will showcase the country’s spiritual and mythological stories. The suggestion for this also came from Sanskar Bharati.

Another idea which was conceived by this organisation and has come to fruition is of Sanskriti Gram – a temporary but grand tech-enabled museum spread over eight acres that has been reportedly designed by set-makers of the Baahubali movie and is being executed by the state tourism department. It is located strategically in the Arail area closer to those sectors where the high-end tent city is located.

Created specifically keeping in mind the comfort of non-resident Indians, foreigners and rich, elite Indians, one-night stay here in the tent city can set you back by Rs 2,500 to Rs 35,000 depending on the luxury of the tent you choose to stay in. Primarily, this will be the target audience of the gram.

‘Sanskar Bharati only gave the concept. The execution from start to beginning is entirely in the hands of the state tourism department,” an official involved in curating the museum said on condition of anonymity as he is not authorised to speak to the media. “In the museum, we have divided India’s history into 17 different eras starting from pre-historic times. Inspired by New Delhi Akshardham Temple’s boat sojourn which takes one through the cultural evolution of India, this museum will have different galleries on Harappa civilisation, Vedic times, the Mahabharata, the Ramayana, Mauryas and so on. We will highlight development of temple architecture, Bhakti movement, India’s greatest personalities - rulers, scientists, mathematicians, physicians, and most important incidents from history,” he added.