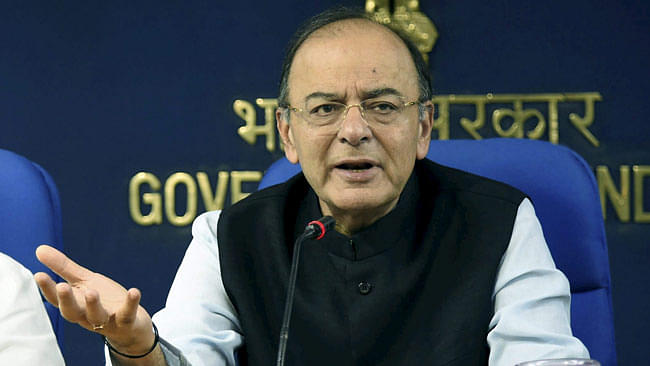 DeMo Anniversary: Note Ban Ethically Correct Decision, Says Jaitley: Making a powerful defence of the demonetisation exercise, Finance Minister Arun Jaitley on Tuesday said the move changed the agenda and made corruption more difficult because it was a “morally and ethically correct” step, it was also “politically correct”. He described the demonetisation of Rs 500 and 1,000 notes as “a watershed moment for the Indian economy”. He said the reform undertaken by the Bharatiya Janata Party-led government has lifted India’s stature in the global economy. Slamming the previous Congress-led government for its “policy paralysis” and the poor state of economy with excess dependence on cash, Jaitley said the “status quo needed to be shaken up”. While the opposition has announced it will observe 8 November as a Black Day, the ruling party will mark it as Anti-Black Money Day.

I-T Notices For One Lakh Suspicious Deposits Soon: The Income Tax Department is ready to issue notices to about one lakh entities and individuals, who deposited huge amounts of cash in banks post demonetisation and whose tax returns have been picked for detailed probe into suspected discrepancies. Issue of notices will begin this week, official sources said. In the first tranche, notices will be issued to 70,000 entities, who deposited over Rs 50 lakh in cash in banks but chose not to file tax returns or respond to the relevant I-T Department advisories, the sources said. Similarly, about 30,000 scrutiny notices will be issued to those whose deposits and tax returns were found to be starkly “deviant” from their past behaviour or their accounts showed huge monetary transactions post demonetisation, they added. As many as 20,572 tax returns have been selected for the scrutiny procedure by the department post demonetisation.

Government Hints At Pruning More Items In 28 Per Cent GST Slab: The Union government has hinted at pruning the list of items in the highest goods and services tax (GST) tax bracket of 28 per cent after revenue in the new regime equalise collections previously. Finance Minister Arun Jaitley said some of the items should never have been in the 28 per cent slab and the GST Council in the last three-four meetings has slashed rates on over 100 items, thereby bringing them down either from 28 per cent to 18 per cent or from 18 per cent to 12 per cent. "We have been gradually bringing them down. The whole idea is, as your revenue collections neutralise we must prune it and that's the pattern in which the council has so far been functioning. I see that as a future guide as far as the council is concerned," Jaitley said at India Today Conclave.

Second Phase Of Digital Payments Push On Way: The Union government is working on starting the second phase of promoting digital payments from January. "Information and Broadcasting Ministry along with IT Ministry are involved in firming up this plan," said a government official. Since the demonetisation of high value currency in November last year, the government has been pushing for digital payments to move towards a less-cash economy as well as enhance tax base. According to Reserve Bank of India data, 933 crore electronic transactions have taken place in the country, amounting to Rs 12.13 lakh crore, between November 2016 and September 2017. The electronic transaction volume peaked in December 2016 to 95.75 crore.

Infosys Setting Up Innovation Hubs In US: Infosys is setting up an innovation hub in Indiana and would hire 2,000 people for it, with plans to open many more such hubs in the US, the software major’s non-executive chairman Nandan Nilekani has said. "We are working closely with the Indiana government and hiring people locally both from universities as well as experienced people," he said while addressing a two-day trade meeting 'Unlocking US-India Trade Potential",organised by the US Consulate General, Chennai, in association with Atlantic Council South Asia Centre. "This is just a part of many innovation hubs that Infosys will be opening in the US. We are talking to many of the states," he said. Nilekani saw a huge potential in the business relationship between US and India in the wake of new start-ups emerging in the country.

Mobile Numbers Won't Be Disconnected For Not Linking With Aadhaar: DoT: The Union government on Tuesday assured that there will be no disconnection of mobile numbers that are not linked to Aadhaar. "The Department of Telecom (DoT) is waiting for the Supreme Court verdict on Aadhaar linking to decide on the action against those who do not want to link their mobile number with Aadhaar," DoT Secretary Aruna Sundararajan said. At present, there is no plan to disconnect mobile numbers for not linking with the UIDAI number, she said. Telecom operators however have been insistent with multiple messages to subscribers threatening discontinuity in services. “As per government directive, it is mandatory to link Aadhaar with your mobile number else your number will be terminated.” However clarifying on the issue, Communications Minister Manoj Sinha said that mobile numbers will not be disconnected over the Aadhaar linkage issue.

J&K Terror Funding: Rs 36.3 Crore Demonetised Notes Seized: The National Investigation Agency (NIA) on Tuesday said it has arrested nine people and seized Rs 36.3 crore demonetised currency notes in a case related to funding of militancy in Jammu and Kashmir. The recovery was made by NIA at Jai Singh Road near Connaught Place in New Delhi. "They were carrying 28 cartons filled with the demonetised currency notes of Rs 500 and Rs 1,000 in four luxury vehicles," said an NIA officer. The seizure comes after Finance Minister Arun Jaitley said the demonetisation of high-value currency notes had helped curb the funding of militancy in Jammu and Kashmir, as the “miscreants have run out of cash”. Those arrested will be produced in a special NIA court on today (Wednesday). Investigation by the agency revealed that some people who had links with the separatists and terrorists still were in possession of a significant amount of demonetised currency.

India Launches Anti-Dumping Probe Into Cheap Paper Imports: Following complaints from domestic companies, India has launched an anti-dumping investigation into imports of a certain kind of paper from Indonesia, Thailand and Singapore. The West Coast Paper Mills, Tamil Nadu Newsprint, Papers Limited, Ballarpur Industries and JK Paper had filed an application before the Directorate General of Anti-dumping and Allied Duties (DGAD) for initiation of anti-dumping investigation into imports of ‘uncoated paper’ from the three countries. The DGAD in a notification said it had found “sufficient prima facie evidence” of dumping of such paper from these countries. This paper is used as a photocopy or copy paper. The move is aimed at protecting domestic players in the sector against cheap imports. India has already imposed anti-dumping duty on several products to tackle cheap imports from countries, including China.

Earth Will Turn Into A Sizzling Fireball In 600 Years, Warns Stephen Hawking: The human race will perish on Earth as growing population and massive power consumption would turn the planet into a sizzling fireball in less than 600 years, British physicist Stephen Hawking has warned. He appealed to investors to back his plans to travel to the closest star outside the solar system, with the hope that a habitable planet might be orbiting it, said a report. To ensure the survival of our species for another million years, humans must "boldly go where no one has gone before," the world-renowned scientist said in a video appearance at the Tencent WE Summit in Beijing. Alpha Centauri is one of the closest stars to our solar system. Scientists believe that it may host planets that could foster life, just like Earth. Hawking is backing Breakthrough Starshot, a venture to reach this system within two decades using a tiny aircraft that could travel at the speed of light.

No Proof Required: Demonetisation And Its Contents: It was about both politics and economics. It is an acknowledged political success and early ‘returns’ indicate an economic success story as well.

Demonetisation, One Year Later. Success Or Failure? If you look at demonetisation in isolation and the shock it gave to the Indian economy, it failed. But step back and see it as part of a larger plan to weed out corruption, a different story begins to emerge.

Relflections On Demonetisation, A Year Later: In the years to come, we can expect an explosion of digital payment tools which will increase India’s digital footprint, accelerate financial inclusion and usher in transparency in banking operations.

Demonetisation And The Fight Against Black Money: Counterfeit currency worth Rs 43.5 crore, the largest cache ever, was detected by the banking system during the fiscal year 2016-17. Though demonetisation seemed to be madness, yet there was method in it.

India Caught On The Backfoot As China Entrenches Itself In Nepal: New Delhi has to deploy all its diplomatic skills and resources to ensure that even if Oli becomes the next prime minister of Nepal, he does not succeed in his game plan of turning Nepal into a client state of China.