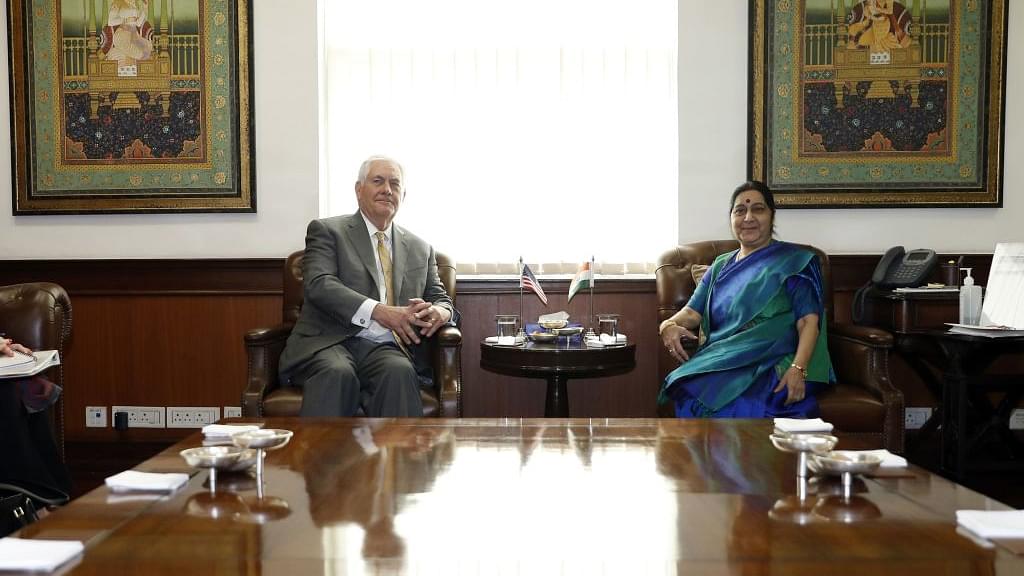 US Will Provide India Best Military Technology, Says Tillerson: US will provide India with best technologies for its military modernisation, US Secretary of State Rex Tillerson said on Wednesday. It includes offers to supply F-16 and F-18 fighter jets. "The US supports India's emergence as a leading power and will continue to contribute to the Indian capability to provide security throughout the region," he said after holding wide-ranging talks with External Affairs Minister Sushma Swaraj addressing a joint press conference with Swaraj. Highlighting the India-US convergence on strategic issues, Tillerson sent a stern message to Pakistan, saying terror safe havens would not be tolerated and that too many terrorist organisations were finding sanctuary in the neighbouring country. He not only noted that terror groups based in Pakistan were a serious threat to other countries but said they might well affect the stability of the host nation itself and that was a cause of concern for the US.

Deadline To Link Aadhaar To Welfare Schemes Extended: The Union government informed the Supreme Court on Wednesday that it has decided to extend the deadline for linking Aadhaar with various social welfare schemes until 31 March 2018. Till that date, the Centre submitted, no coercive action would be taken against people not having an Aadhaar card or who are yet to enroll. The court had earlier set the deadline for linking Aadhaar as 31 December. Attorney-General K K Venugopal said all Aadhaar-related matters pending adjudication by the apex court must go to a five-judge constitution bench for its "far-reaching consequences". The Centre had earlier extended the last date for mandatory linking of the 12-digit biometric identification number to avail social benefits to 31 December 2017 from the earlier 30 September.

Major Lay-Offs At Infosys-Wipro In The Last Six Months: Hit by the slowdown in spending across the world, India’s second and third largest IT companies – Infosys and Wipro – have downsized their workforce by 3,646 engineers between April and September this year. While Wipro saw a sudden headcount decline of 1.82 per cent in the second quarter, the decline at Infosys has been more gradual. Infosys has laid off 1,924 employees during the six-month period, while Wipro has seen a net reduction of 1,722, according to data provided by the companies in their regulatory filings. The two giants employed a total of 365,845 at the beginning of the financial year in April, and the number came down to 362,199 by the end of September.

Interstate Migration Doubles: In India, interstate migration doubled between 2001 and 2011 compared to the previous decade, growing 4.5 per cent annually, a report by the World Economic Forum said. The annual interstate migration in the country averaged about 5-6 million migrants a year. According to the report, Pune and Surat emerged as the most affected cities in the Asian region. “Migrants are drawn to cities in search of economic, social and creative opportunities,” said the report. Citing examples, the report said, Bihar, a state with one of the highest outflows of domestic migrants, has a per-capita income roughly equivalent to Somalia’s (around $520) and a birth rate of 3.4 children per woman, on the other hand, Kerala, a destination for in-migrants, has a per-capita income four times that of Bihar’s (about $2,350) and a birth rate of 1.6 children per woman, on par with Denmark.

New Aadhaar-Mobile Number Verification Move: The government may go beyond Aadhaar to verify mobile numbers. After being heavily criticised for forcing people to link their Aadhaar numbers with their mobile connection, thereby creating scope for privacy invasion, the Union government is considering the option of allowing other identity proofs to complete the verification process. These IDs could include ration card, driver's licence and passport. "We are ready to explore other options. We are looking at whether a ration card, or a driver's licence, or some other authentication document can be used. No final call has been taken on the matter though," said an official source. "It must be in conformity with the mandate laid down by the Supreme Court. We cannot dilute the process," the source said

US Makes Renewal Of H-1B Visa More Difficult: In a new policy initiative that will make the renewal of H-1B and L1 visas more difficult, the Donald Trump administration has announced that the burden of proof lies on the applicant even when an extension is sought. Under the previous directive, a person would usually be considered for extension of their visa if she/he was once found to be eligible for a work visa initially. But now, during every extension, the applicant needs to prove that they are still eligible for the visa they apply for. Revoking its more than 13-year-old policy, the US Citizenship and Immigration Services (USCIS) said the burden of proof in establishing eligibility is, at all times, on the petitioner. USCIS added that the previous directive placed the burden on this federal agency.

Give India Some Credit For This Capital Initiative: The Rs 2.1 trillion recapitalisation into PSU banks has been well received by rating companies, despite its unconventional structure. The recapitalisation into the PSU banks to spur credit growth could offer fresh legs to an equity market where lofty valuations are wobbling atop anemic earnings growth.

Overcoming A Hard-Wired Bias For Loss Aversion: With rising income levels, the psyche of the middle-class Indian is shifting from a saver to an investor. Trends suggest that the traditional Indian ‘saver’ is embracing equities as an asset class for wealth creation.

Shinzo Abe’s Win Will Shape Asia’s Future: Abe can now move forward on pushing for a revision to Japan’s war-renouncing constitution. From envisioning a new security architecture for the Indo-Pacific region to seeing India’s potential as a key partner, he has shown great foresight.

Catalonia, Etc: The Idea Of Secession Is Illogical When The Nation-State Is Itself Dying: Nations are figments of the mind. What you cannot have is equivalence between nation and state. The two are different things, and the idea is well past its sell-by date.