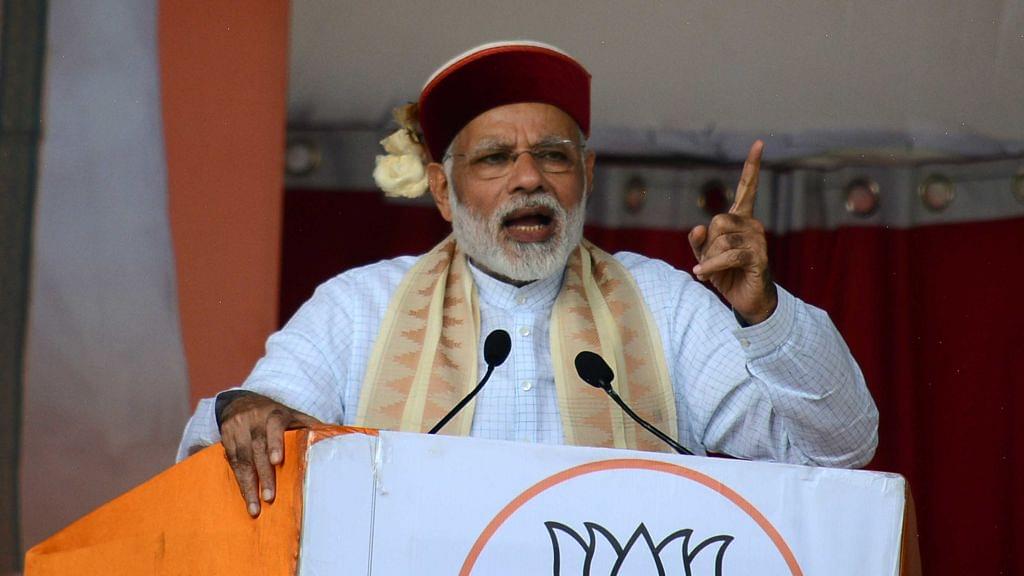 Pakistan Interfering In Gujarat Polls, Says Modi: Prime Minister Narendra Modi said on Sunday that Pakistan was interfering in Gujarat Assembly polls, and sought an explanation from the Congress over its top partymen who are said to have recently met leaders from the neighbouring country. He raised questions over the alleged appeal by former director general of the Pakistan Army, Sardar Arshad Rafiq, that senior Congress leader Ahmed Patel be made chief minister of Gujarat. Modi said former Congress minister Mani Shankar Aiyar had called him neech (vile) a day after the alleged meeting of Pakistani leaders with top Congressmen. He said the Congress should inform the people of the country what exactly it was up to. Modi was speaking at a rally for the ongoing state assembly polls. The second phase of polling in north and central Gujarat, including the Banaskantha district, will be held on 14 December.

Nitish Kumar Calls For All India Liquor Ban: Bihar Chief Minister Nitish Kumar on Sunday demanded a nationwide ban on consumption of liquor. "When Gujarat could implement liquor ban, when Bihar also showed that it could be banned in the state, why can't it be banned in the entire country?" Kumar asked. Addressing a national convention of the Janata Dal-United, he said Bihar witnessed a drastic decline in crime rate, road accidents and cases of mental disorders and other ailments caused by the consumption of liquor, since his government prohibited it in the state. Since liquor was banned in Bihar, Kumar said, incidents of road accidents have gone down by about 31 per cent, mental disorders by 33 per cent and depression a whopping 81 per cent, while the income of people has gone up by 75 per cent. The Bihar government had imposed a ban on liquor in the state in April 2016.

Parrikar Launches Mobile Food Testing Laboratory: Goa is blazing a trail in food safety. Chief Minister Manohar Parrikar on Sunday launched the country’s first-ever mobile food testing laboratory. The laboratory mounted on a bus will be travelling across the state checking food samples on the spot. “It is entirely funded by the Centre, which will also bear the maintenance cost for five years,” he said. The laboratory, he said, will help in on-the-spot testing of food items and curb adulteration. “Besides this, it will also educate people about nutrition and importance of safe food,” the chief minister added. Parrikar said awareness about food items is crucial as “most of the time we don’t know what is mixed in the food that we eat.” Director of Food and Drugs Administration Jyoti Sardessai said the vehicle is equipped with milk analyser, hot air oven, hot plate, mixer grinder, digital weighing scale, digital multi parameter hand-held meter, power generator, air conditioner and refrigerator.

India Inc Upbeat On Economy, Says CII Report: Companies in India are hopeful that the country's economic growth will gain traction during the third quarter this fiscal, says a report. The Confederation of Indian Industry's (CII) Business Confidence index (BCI) has climbed up to touch 59.7 during October-December 2017 compared to 58.3 in the previous quarter, reflecting an improvement in perception regarding overall economic conditions amidst indications of a normalisation in business situation post the recent disruptions like goods and services tax (GST). "The survey underscores the perception that the economy is on a sustainable recovery path, with the many government interventions having an impact on the ground. The climb in business confidence underpins the hope that the upward trend one is seeing on macro figures would be sustained," CII director general Chandrajit Banerjee said.

Kashmir: Separatist Leader Yasin Malik Arrested In Srinagar: Jammu and Kashmir Liberation Front (JKLF) chairman Yasin Malik was detained as he tried to take out a march towards the local office of the United Nations in Srinagar to protest alleged human rights violations in Kashmir. Malik was near the Lal Chowk in Srinagar and was to march towards the office of United Nations Military Observer Group in India and Pakistan (UNMOGIP) at Sonwar. The separatists had asked people to observe a shutdown and march towards the office of UNMOGIP to protest the "gross human rights violations". Restrictions have been placed in most areas of Srinagar to prevent the separatist-called march on Sunday, coinciding with World Human Rights Day. Mirwaiz Umer Farooq and Syed Ali Geelani, two other senior separatist leaders, have been put under house arrest to prevent their participation in the protest.

New RBI Drive To Fight Fraud: The Reserve Bank of India (RBI) has launched an SMS campaign and a 'missed-call' helpline to warn people against fraudsters promising prize money. Typically, such fraudsters make calls or send SMS and emails to gullible people promising lotteries and prize money from the Reserve Bank — at times from the RBI Governor himself —to trap them into sharing their banking account details or paying some 'fees or charges' to get the money. "Don't pay fees or charges to get large sums in return. RBI/RBI Governor/Government never sends such email/SMS/call," the central bank says in one such SMS, while asking them to give a missed call to a phone number (8691960000). The RBI helpline is aimed at explaining to the general public that it never asks any such details from individuals and such calls are made by fraudsters who typically ask the gullible public to either deposit a "small amount with RBI" to get a big amount of money in return in the name of some "prize or lottery".

Indian Ahead Of China And Israel In Startup Ecosystem, Says Michael Marks: One of the world’s leading venture capitalists has said that India is ahead of countries like China and Israel in having a robust and deep startup ecosystem. Michael Marks, whose investments include Twitter and SpaceX, said that the year 2017 has seen around $31,299 million being raised by around 19,000 mainstream Indian tech startups with most notable investments coming in the second quarter onwards. "Regulatory issues have been an obstacle to bring in more capital to India but with demonetisation and goods and services tax, organically it will get better," he said. Mark's venture capital firm, Innoventure Partners is now also collaborating with Bengaluru-based Startups Club to launch an accelerator along with a seed fund targeting around $100,000 into startups with valuation of at least $1 million. Innoventure aims to reach out to smaller towns and cities. Marks venture will have a key focus on verticals like education, agriculture, robotics, healthcare, machine learning, analytics and blockchain.

India’s strategic unicorn in Chabahar: It is imperative to remember that Chabahar is an SEZ and not an exclusive project handed over to India. The security dimension of Chabahar is based on a preferential approach towards Indian interests rather than one based on exclusivity by Iran.

A Private Capex Recovery Is Expected In 2018 For The First Time In Six Years. Here’s Why: The combination of improving corporate return expectations and balance-sheet fundamentals, along with a strengthening financial system, should be able to meet investment credit demand and pave the way for a private capex recovery in 2018 — marking a positive inflection point in the macro cycle as the economic recovers fully.

Finally, The Farm Crisis Takes Political Centre Stage: That Finance Minister Arun Jaitley’s first pre-budget discussion was on agriculture signals that rural sector will be a central focus of Union Budget 2018, the last before elections 2019. A long-term solution to the farm crisis should recognise that the integration of Indian farming with the market needs to be accelerated.

Rethinking Astrology: Creating New Rules Of Prediction: Data analytics can be applied to traditional wisdom to build a whole new science of astrology. The tools are already available — and are being used in the corporate world. All we need is the vision and the will.