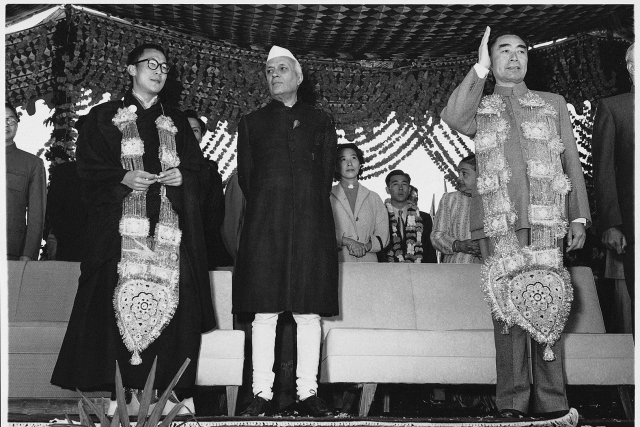 The Dalai Lama, Nehru and Zhou Enlai in 1956 in India, at the UNESCO Buddhist Conference in Ashok Hotel, New Delhi. (Homai Vyarawalla/Wikimedia Commons)

In 1948, John King Fairbank, considered the godfather of American Sinology, noted, that to understand the policies and actions of Chinese leaders, historical perspective is “not a luxury, but a necessity.”

One of the reasons Indian policy makers fail to decipher Chinese actions lies in the comparatively scarce historical work about Chinese strategic thinking and actions, which in turn ensures that India falls for the same traps ad nauseam.

That the Henderson Brookes-Bhagat report on the reasons behind the 1962 debacle still remains officially classified, despite portions of it being available on the internet, epitomizes India’s failure to what Fairbank referred to as getting a “historical perspective.”

Perhaps it is this lack of historical and strategic understanding of the Chinese Communist Party’s psyche which has resulted in India having a trade deficit of $48.66 billion in FY 2019-20 with China.

The belief that strong commercial and economic engagements with China would compel them to desist from military coercion in the fear of losing out on the Indian market, should now be buried in the vast cold terrain of Eastern Ladakh where a strong sense of déjà vu of the events preceding the 1962 war prevails.

Claude Arpi’s book, The End of an Era: India Exits Tibet, is an attempt to fill out on this void. This is the fourth volume of Arpi’s work on the relations between India and Tibet (1947-1962). It retraces the steps between 1958-1962 which witnessed the consolidation of China’s military presence in Tibet, the failed Tibetan uprising of 1959, the Dalai Lama’s escape to India and how political, bureaucratic and military leadership in India failed to grasp Chinese intentions in Tibet with serious ramifications for India.

The 1962 military drubbing was the culmination of the failure to understand that allowing PLA to ride roughshod over Tibet would resulted in the conversion of the peaceful India-Tibet border into a hostile India-China border.

As Maj S.L. Chibber, the Consul General in Lhasa, would point out in his ‘Annual Political Report’ of 1957: India’s relations with the Tibetans were rather cordial which came to a sudden end with the arrival of the Chinese.

Apa Pant, who was the Political Officer in Gangtok made his third visit to Tibet in 1957. His report elaborated how with each visit his first impression was confirmed that Tibet was a “country forcibly, with the might of military strength, ‘occupied’ by the Chinese.”

Any strategic observer would have been alarmed at this massive infrastructure and military buildup in the neighbourhood. Yet, New Delhi continued to live in delusion about peaceful Chinese intentions.

Jawaharlal Nehru’s idealism as a tool of statecraft was to soon unravel disastrously before Mao Zedong’s hard core pragmatism combined with Sun Tzu’s ‘deception’ as means of war.

Pant presciently warned that Chinese regime’s failure to assimilate the Tibetans into their way of life and “emotional and spiritual contacts” between them being non-existent, had the danger of China pushing in millions of Hans into Tibet, converting the Tibetans into a minority in their own land.

The warning, unfortunately, has come true.

While Nehru and defence minister V.K.Krishna Menon obfuscated over reports of PLA buildup in Tibet, China had a specific purpose behind introducing a disproportionate number of troops to combat Tibetan resistance.

Arpi cites from Jinagling Li’s book Suppressing Rebellion in Tibet and the China-India Border War, edited by Matthew Akester, that the PLA directly inducted seven of the twelve military commands for military operations and two for logistical support in Tibet.

The Central Military Commission sent nearly all military branches to fight in Tibet, including the chemical warfare unit. This massive mobilisation of troops to combat an enemy which was disorganised, scattered into groups, and what Li calls “a force with practically no military training,” should have raised eyebrows in New Delhi.

Arpi is convinced that PLA was indeed rehearsing for a “forthcoming conflict with India.” India was however playing the ostrich and refusing to read the writing on the wall.

This strategic blindfolding was however not a fresh development.

The ‘Pannikar doctrine’, as Arpi refers to Ambassador K.M. Pannikar’s thoughts of not speaking “of a border which is settled, if it were not settled China would have brought the issue to the negotiating table,” despite Premier Chou En-lai’s ominous sounding statement of “we are prepared to settle all such problems as are ripe for settlement,” was a harbinger of a dispute which started with Barahoti in 1954 and continues till date.

Indian shortsightedness in failing to mention specifically the passes mentioned in the 1954 ‘Agreement on Trade and Intercourse with Tibet Region,’ as border passes, led to Chinese repudiation of the principle of watershed as marking of international boundary and the disputes which followed in its trail.

The 1954 agreement proved critical for China as India, for the first time, agreed to Tibet as the ‘Tibet Region of China’ and gave up the right to military escorts in Yatung and Gyantse which it had inherited from the British. India also handed over postal, telegraph and public telephone services operated by them in Tibet to China. In short, India had decided to become blind in China which would prove tragic, as subsequent events showed.

Acharya J.B. Kriplani would later refer to the 1954 agreement as “born in sin” and rightfully so, as India did not even raise the border issues with the Chinese and abandoned Tibet to its fate.

The building of the road connecting Xinjiang to Lhasa about which Foreign Secretary Subimal Dutt said: "little doubt that the newly constructed 1,200 kilometre road passes through Aksai Chin," which was till then Indian territory, without any Indian effort to stop the construction, was a manifestation of India’s apathetic approach towards its national security.

Dutt’s official response expressing regret about China neither taking permission nor informing the Indian government about the road while appearing surreal, represented the spineless Indian response to this perfidy.

Ironically, while China was preparing for war, Nehru was busy promoting PRC’s cause at various international forums.

B.N Mullik, Director, Intelligence Bureau (IB), claimed that he had reported the building of Chinese road in the area in November 1952 and that the Indian trade Agent in Gartok had reported about it in 1955 and 1957. Arpi also cites S.S. Khera, the Cabinet Secretary, accepting that information about Chinese activity in Aksai Chin had “begun to come in by 1952 or earlier.”

The Indian Military Attaché in Beijing, Brig. S.S. Malik, had passed on the information about the road in Aksai Chin to the Military HQ in 1956. The formal road opening on 6 October 1957 was reported by a Chinese newspaper Kuang-ming Jih-pao, but the Indian leadership was busy promoting the utopia called ‘Panchsheel’ rather than realising the importance of loss of a strategically vital territory.

Arpi narrates an interesting incident when in 1955, Sidney Wignall, a British mountaineer was asked by the Army Chief Gen. K.S. Thimayya to get proof of the Aksai Chin road. Like a spy thriller, Wignall was arrested and interrogated by the Chinese and finally released in the hope that he would never make it back to India amidst the heavy blizzards.

Wignall, however, reached India with his report which was trashed by Krishna Menon in Nehru’s presence as “lapping up American CIA agent-provocateur propaganda.”

Lt Col R.S. Basera’s equally daring mission in 1957 resulted in the Director of Military Intelligence being “more or less rebuked” by Nehru for sending the patrol. Nehru officially acknowledged the construction of the Sinkiang-Tibet highway through Aksai Chin in Parliament only in August 1959. It was this laissez faire which perhaps compelled General Thimayya to tell his officers that “I hope that I am not leaving you as cannon fodder for the Chinese Communists.” The foreboding would come true three years later.

Arpi brings out excruciating details about the failed Tibetan uprising of March 1959 which led to the Dalai Lama’s escape under extremely arduous conditions. By the end of it all, Consul General Chibber concluded; “The Chinese have entrenched themselves so firmly that they will not care about anything, even world opinion, and will go ahead with their policy of annihilating the Tibetan race.” The decisions arrived at the Seventh Tibet Forum in August 2020 under President Xi Jinping shows that ‘Sinicisation’ of Tibet is not far off.

Non-utilisation of the Indian Air Force (IAF) in combat mode during the 1962 conflict remains one of the biggest mysteries of the war. The IB is said to have cautioned the government that the use of offensive air power could result in the PLAAF attacking Indian cities like Calcutta.

Arpi mobilises facts to demolish the myth of superiority of the People's Liberation Army Air Force (PLAAF). India had airfields in the vicinity of the conflict zone which would have allowed them to fly shorter distances and carry higher payloads than PLAAF which had only one airfield in Tibet. And PLAAF had no fuel to fly its aircrafts.

The amount of gasoline reaching Tibet from China was not sufficient enough to maintain both the occupation force and PLAAF.

While in 1960, 2,220 tons of gasoline was imported into Tibet, in 1962, this figure had dropped to 30 tons. Further PLAAF’s planes were engaged on the Korean front and the Soviet Union had stopped supply of spare parts for MIG fighter planes. Squadron 106 of the IAF with Wing Commander Jag Mohan ‘Jaggi’ Nath had been flying extensively over Tibet between 1959-1962 on reconnaissance missions. Wing Commander ‘Jaggi’ Nath was categorical; “If we had sent a few airplanes (into Tibet), we could have wiped the Chinese out. They did not believe me that there was no Chinese air force.”

The End of an Era: India Exits Tibet is as extensive a work as any scholar would find on the subject. Arpi’s strength, apart from his vast knowledge, is his love for the subject which makes the book racy, almost fiction-like, which stands apart from the pedantic style writings generally available on such subjects.

He brings out the Dalai Lama’s escape, the harassment of the Indian Trade Agencies and Indian pilgrims, and a rarely touched subject—the treatment of Indian PoW’s in China in a manner where the reader can almost visualise the incidents.