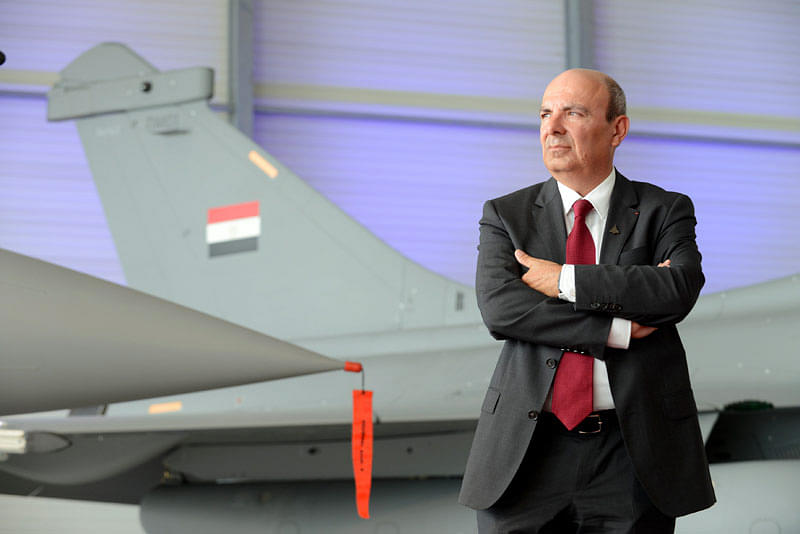 Dassault Aviation CEO Eric Trappier with a Rafale fighter jet in the background.

Just a day after the Ministry of Defence submitted, in a sealed envelope, the details of the Rafale deal to the Supreme Court, the chief executive officer (CEO) of Dassault Aviation, the firm that is building the fighter jets for the Indian Air Force (IAF), has put out new information related to the agreement for 36 aircraft.

In an interview with the Asian News International, set at the Istres-Le Tube Air Base of the French Air Force, inside a hanger with the first Rafale fighter made for the IAF, Dassault CEO Eric Trappier spoke at length about the contours of the deal and issues related to it, including the offset clause, the controversy surrounding its engagement with Anil Ambani’s Reliance and the ‘exclusion’ of Hindustan Aeronautics Limited (HAL) from the deal, and the debate about the price of the fighter renewed by a controversial report in the Business Standard last week. These are the points Trappier made:

One, he confirmed that Dassault has reached agreements with 30 firms in India for the execution of the offset clause other than Reliance. Around 30 per cent of the offset will be executed through these 30 firms. Contrary to what has been claimed, the investment for offset execution will be made directly by Dassault, not through its joint-venture with Reliance, Dassault Reliance Aerospace Limited. The joint-venture will receive investment worth only 10 per cent of the total offset value. In the five “coming” years, Dassault will invest only Rs 400 crore in the joint-venture, he said.

Two, Trappier claimed that the 36 fighters bought in flyaway condition (not including the weapons package) are 9 per cent cheaper than the 18 flyaway aircraft that were being sold to India under the deal which the Congress-led United Progressive Alliance (UPA) government was negotiating as part of the 126-fighter deal. He said that the price of the flyaway aircraft under both the deals could be compared, not the cost incurred in procuring 36 in flyaway condition and the 108 that the HAL was to build in India. Contrary to this, the Business Standard report, which claimed that the Rafale aircraft bought by the Narendra Modi government cost 40 per cent more than Dassault's earlier offer, appears to compare the price of the fighters being procured in flyaway condition with those offered under the 126-fighter deal involving manufacturing of 108 fighters in India by HAL.

Three, Trappier said that negotiations for 126 fighter jets proposal, which involved the assembly of 108 fighters in India by HAL, had two problems.

The first was linked to the disagreement related to the number of hours the HAL would take to build the fighters in India in comparison with the time taken by Dassault to build the same in France. As is already known from previous reports, including this, the HAL needed 2.7 times higher man-hours compared to the French side for the manufacture of Rafale aircraft in India. HAL and Dassault did not reach a work-share agreement for the proposed deal, reports have claimed.

Among other things, Trappier said he was sad to see Congress president Rahul Gandhi attacking the deal and calling him a “liar”.