HAL: Promising More Than It Can Deliver 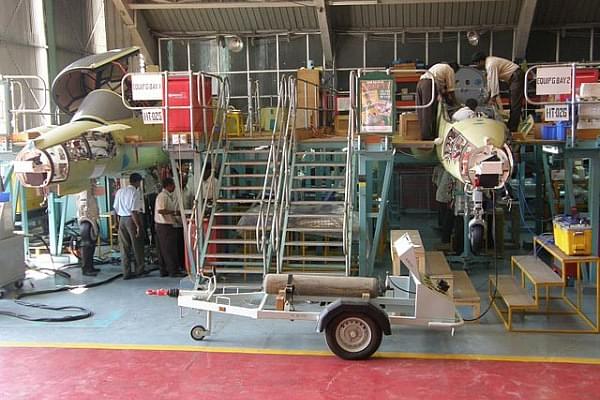 On Sunday (30 September), Defence Minister Nirmala Sitharaman once again highlighted what many aviation specialists have mentioned about public sector company Hindustan Aeronautics Ltd (HAL). “More help needed to be given to HAL — capacity, skill, cutting down on overheads — and we are attending to all this,” she said at Bengaluru.

Of late, many commentators and observers have suddenly woken up to the virtues of HAL, the only Indian DPSU (defence public sector undertaking) entrusted with the production and upgrade of fighter aircraft and helicopters in the country.

They point out that over the years, HAL has been producing the MIG series aircraft, the Su-30, the Mirage, Jaguar, and LCA (Light Combat Aircraft) fighter aircraft, Hawk trainers, as well as the Advanced Light Helicopter (ALH). In addition, HAL has been engaged in the development of the Intermediate Jet Trainer (IJT) and HTT-40 trainer, the Light Combat Helicopter (LCH), and the Light Utility Helicopter (LUH). In addition, HAL undertakes aircraft overhauling for Jaguar, Mirage 2000, Su-30, Cheetah/Chetak, and ALH. Historically, HAL has been the de facto agency to receive production Transfer of Technology (ToT) and aircraft manufacture under licence. No one can dispute this legacy. However, this is just half the story.

When it comes to prototype aircraft programmes of HAL—the IJT, HTT 40, LCH, and LUH—the defence public sector unit has faltered big time. The IJT project, for instance, is behind schedule by over 14 years. It has encountered serious design flaws, which prevents the aircraft from being cleared for safe execution of stall and spin, which is mandatory for training military pilots. Similarly, the HTT 40 project is delayed by over six years. The LCH programme, which was sanctioned in 2006 to achieve operational clearance by December 2010, is delayed by more than seven years. The sanction for design and development (D&D) of LUH was accorded in February 2009, with the aim of the operational clearance of the basic version by February 2014. More than four years later, it is nowhere in sight.

HAL’s most ambitious project, the LCA Tejas was contracted in 2006, and 2010 was supposed to be the year in which the FOC (full operational capability) was to be obtained. Instead of meeting that deadline, the LCA could get only the initial operational clearance (IOC) in 2013. So far only nine LCAs have been delivered. The aircraft upgrade projects and licence production of aircraft have also not been met. The DARIN-III upgrade has been delayed by almost six years.

A more detailed peek into the history of LCA will tell you that the operational requirements of the LCA were jointly drafted by the DRDO (Defence Research and Development Organisation) and IAF in the early 1980s and formally specified by the IAF in ASR/2/85. The contract for supply of 20 LCA Tejas of series production (16 strike and four trainers) in initial operational clearance Mk-I configuration was signed between the Ministry of Defence (MoD) and HAL on 31 March 2006. The I0C for the aircraft was planned to be completed by October 2008, and it was envisaged that the delivery of first 20 aircraft would be completed by 2012.

However, the achievement of IOC of the LCA aircraft was delayed and finally achieved in 2013. The delivery of the aircraft should have been completed by 2017. However, so far, the IAF could induct only two LCA Mk-I aircraft into their ‘Flying Daggers’ squadron at Bengaluru on 1 July 2016.

The LCA contract of series production (16 strike and four trainers) in final operational clearance (FOC) Mk-I configuration was signed between the MoD and HAL on 23 December 2010. According to the contract, the delivery of aircraft in FOC configuration was to commence in mid-2014, and the delivery of the aircraft was to be completed by December 2016. The achievement of FOC of the LCA aircraft has been delayed, and the present deadline is projected as December 2018. However, considering the number of test points that are to be completed towards achieving the FOC, the PDC (pre-departure clearance) is most likely to be extended.

It must be pointed out that the Full Scale Engineering Development Phase II was sanctioned on 20 November 2001 and included creation of facilities to achieve a production capacity of eight Tejas aircraft per year from the date of sanction, i.e., May 2006. While the IOC was accorded on 20 December 2013, the first squadron of the IAF could only be raised in July 2016 with only two LCA. Till date, only nine aircraft have been delivered—four in 2016-17 and five in 2017-18. Thus, even 11 years after placing the initial order in May 2006, HAL is yet to demonstrate the authorised production rate of eight aircraft per year. This, despite the government sanctioning Rs 1,381.04 crore towards increasing the production rate of LCA aircraft from eight per year to 16 per year. The delay and constant failure to meet deadlines have affected IAF’s planning process. Historically, HAL is known to project optimistic goals, whereas actual deliveries take place with a delay of usually several years.

Despite all the support and kid-gloves treatment by the IAF (in the form of additional concessions granted by the users, that is, the air force), HAL in the last two years could deliver only seven more LCA Tejas aircraft in the IOC configuration.

Audit reports in the past have brought out various issues in the working and operation of various divisions of HAL. The delays and cost overruns clearly indicate a need for forward planning and the management of task at hand. HAL needs to have greater operational sensitivity to the IAF’s need.

Historically, all the tasks undertaken by HAL have encountered time and/or cost overruns. For the IAF, adherence to contractual timelines is a major concern as it directly impacts operational planning. HAL has been funded for almost 70 years, but has been unable to develop the ecosystem for the aviation sector, which has stagnated for decades. No wonder the Defence Minister said: “There is a lot of detailing to be done. We are sitting together — the MoD, the Air Force and the HAL — to see where the differences can be ironed out. I have been making sure that the HAL and the IAF sit together and they are not seen as adversaries but help one another as user and manufacturer.”

Some claims have been made recently by former HAL bosses about HAL’s ability to make modern aircraft from scratch, but its record so far doesn’t inspire much confidence. The fact that it assembles/manufactures aircraft under license production is well known, but the Indian government pays a very high price to keep HAL going. Two instances should illustrate the point well. The Hawk jet trainer bought from the UK (United Kingdom) cost Rs 78 crore per aircraft in 2004. The same aircraft built under licensed production in 2005 by HAL cost Rs 88 crore. In 2010, HAL charged Rs 98 crore per aircraft, and in 2010 it wanted 1.5 times the last procurement cost in 2016! The figures for Su-30 aircraft procured from Russia are more astounding. A fully formed aircraft from semi-knocked down kits cost the Indian government Rs 270 crore in 2012. In the same year, a licence-built Su-30 by HAL in India cost Rs 420 crore each, a massive mark-up of Rs 150 crore per aircraft.

No wonder, the IAF has reservations about HAL’s capacity to deliver on time and within prescribed budgets.

This piece was first published on the blog Bharat Shakti and has been republished here with permission.