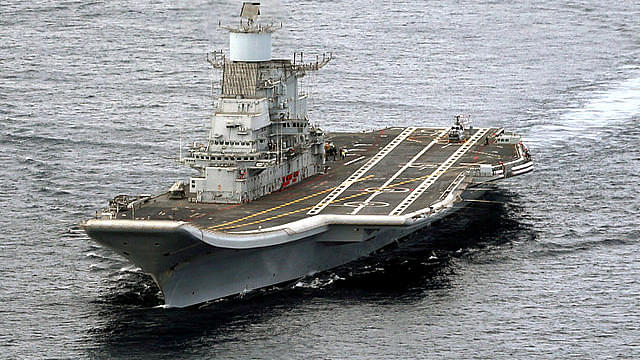 First the good news: the Indian Navy may soon tap the government for funds to build a second aircraft carrier. This would either be a 65,000-tonne nuclear-powered flattop or a 100,000-tonne supercarrier. The Navy’s move is significant because India is currently down to one carrier even as China has publicised its plan to develop six such vessels.

Now the bad news: According to Vice Admiral D M Deshpande, Controller of Warship Production and Acquisition, the new carrier could come at the expense of other projects and weapons as it is a “very big-ticket item”.

Before we analyse whether India needs more aircraft carriers, let’s take a look at the consequences of spending on carriers while ignoring other critical areas of defence.

He replied that what India needed was a strong, mobile Army, Navy and Air Force, well equipped with the latest weapons. Instead of a prestigious, overhauled, old British aircraft carrier (which he called the fifth leg of a dog and an easy target), India should go in for a submarine fleet to guard her long coastline.

Malinovsky wasn’t the first geopolitical expert who scratched his head in disbelief at a poor country acquiring a large and expensive carrier while neglecting its defence against hostile neighbours. Six years earlier, when Second World War hero Marshal Georgy Zhukov had visited India, he had disapproved of the Indian Navy’s decision to acquire an aircraft carrier, saying India was only doing it in order to make Britain happy.

Both Malinovsky and Zhukov had made pivotal contributions to Russia’s defence, especially in the Battle of Stalingrad, and as such were masters of warfare. However, on both occasions, Nehruvian India disregarded the advice of the battle-hardened commanders. The consequences of fielding an under-equipped military were visible in the next three wars.

In 1962, when the Chinese waltzed through the Himalayan frontier, the Indian Army was completely unprepared, lacking even winter clothing. INS Vikrant, which had been commissioned the previous year, played no role in the war.

Again, during the 1965 war, while the Indian Air Force flew Second World War Mysteres and Vampires against Pakistan’s latest United States-gifted F-86 Sabres, the Vikrant did not go out to sea at all.

In early 1971, when the political leadership decided to go to war, the Vikrant had been rusting in the harbour for over three years with cracked boilers. The flagship was pressed into service in a semi-fit condition because the Navy feared the Vikrant would be called a “white elephant and naval aviation would be written off”. Fleet Operations Officer G M Hiranandani told the naval brass, “Vikrant has to be seen as being operational, even if we do not fly the aircraft.”

Pakistan, on the other hand, had acknowledged its limitations and, instead of going for expensive surface vessels, decided submarines were a better option. The Pakistan Navy acquired its first sub in 1963 – four years before India did.

Because of the threat posed by Pakistan’s long-range submarine Ghazi, the Indian Navy had to hide the Vikrant in the Andaman and Nicobar Islands. It was only after the Ghazi was sunk that the carrier started operations in the Bay of Bengal.

The case for more carriers

There is no doubt that India, which is poised to be the world’s third-largest economy and great power, requires more carriers. In a 2009 report titled ‘China’s Maritime Rights and Navy’, Senior Captain Li Jie, an analyst at the Chinese navy’s strategic think tank Naval Research Institute, declared, “No great power that has become a strong power has achieved this without developing carriers.”

Carriers are an essential element of sea control. According to India’s maritime doctrine, “Sea control is the central concept around which the Indian Navy is structured, and aircraft carriers are decidedly the most substantial contributors to it. This is because they possess ordnance delivery capability of a very high order, often greater than the balance fleet units in the Task Force. This is by means of their substantial integral air power, which provides integral, ubiquitous and enhanced combat power, with extended reach and rapid response capability.”

At a bare minimum, India should have three carriers – one for each seaboard, with a third on standby. India was without a carrier task force for six months in 2016 as its lone flattop INS Vikramaditya was undergoing maintenance.

Having three carriers on call is an ideal situation but is possible only if funds allow. If the Navy is prepared to sacrifice other platforms to divert funds to the second carrier, where does it propose to get money for the support vessels?

For, an aircraft carrier doesn’t travel alone. It usually operates with, and is at the centre of, a composite task force, including multi-purpose destroyers, frigates, submarines and logistics ships. The carrier task force is a self-contained and balanced force, capable of undertaking the entire range of operational tasks.

We do not want a situation like that in 1971 when a limping Vikrant was sent into battle along with only four light frigates (one of which lacked sonar) and a lone submarine to provide anti-submarine protection. In his book No Way But Surrender, Vice Admiral N Krishnan writes, “Even assuming that no operational defects developed, it would still be necessary to withdraw ships from the area of operations for fuelling. The basic problem was that if reasonable anti submarine protection had to be provided to Vikrant and the escort ships had to be in close company for this purpose, then how were 18,000 square miles to be kept under surveillance?”

The Navy had deployed the entire complement of the Vikrant’s aircraft in offensive operations against East Pakistan, leaving none for the carrier’s defence. It was a calculated risk that paid off. Had Pakistan been in possession of another long-range submarine, the story may have been different.

While aircraft carriers are symbols of prestige, the bits and parts needed to win wars must not be neglected. Sadly, this has happened. For instance, India’s submarine strength currently stands at 15 vessels and is behind Pakistan’s fleet of 17. Even North Korea, which can barely feed its population, has a fleet of 70 subs, which is why the United States carriers keep a safe distance from the Korean peninsula.

Submarines are the true predators of the deep and will allow India to wreak havoc on its adversaries during a war. A fleet of 24 subs (the sanctioned strength), but ideally 50 undersea vessels, can target every task force in the Indian Ocean. During the 1999 Kargil War, it was a submarine, and not a carrier, that was poised to deliver the first blow had India decided to escalate the conflict. INS Sindhurakshak was deployed very close to Karachi and had its torpedoes trained on the harbour installations.

Former chief of naval staff Admiral Vishnu Bhagwat writes in Betrayal of the Armed Forces that after the 1971 war complacency had set into the force. For instance, the Indian Navy, which had devastated Karachi harbour with its Russian Styx standoff missiles (outside the adversary’s range) and thereby taken the lead in ship-to-ship standoff missile warfare, yielded space to Pakistan in two critical areas. “(Pakistan) acquired the wherewithal to become capable of standoff air-to-surface missile warfare in which they took a 15-year lead and sub-surface to surface missile standoff missile capability in which they took a 20-year lead, all in a 25-year tenure span,” Admiral Bhagwat explains.

The Navy as a force multiplier

India cannot – and should not – match China carrier for carrier, but it should emulate the Chinese strategy of shipbuilding to boost the economy. Admiral Bhagwat points out that the Chinese military and political leadership had declared as a matter of state policy that shipbuilding would be the springboard for China’s industrial development. For India, this is especially advantageous because it is hemmed in to the north and the northeast, and the only strategic space the country has to manoeuvre is in the oceans.