Kargil and Operation Parakram Faced Challenges Of Equipment And Ammunition 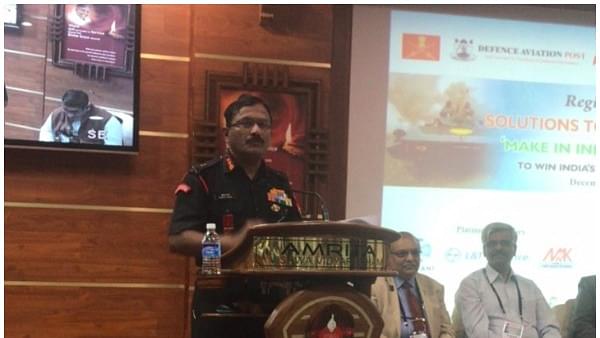 Referring to Operation Parakram (13 December 2001 – 10 June 2002) that was launched soon after the attack on Indian Parliament, Lt Gen Sarath Chand said that even as some of troops had already moved forward of their concentration areas, they had to be stopped on their tracks because of inadequacies.

“After attacks on Indian Parliament, we were very keen to teach Pakistan a lesson. We had mobilised and some of the formations had actually started moving also....but we had to halt our troops on their tracks as were not sure if we were adequately prepared with our equipment and ammunition,” said the Vice Chief Of Army Staff.

Lt Gen Chand was speaking at a Make in India event organised jointly by DefenceAviationPost.com and FICCI at the Amrita University premises in Coimbatore.

Lt Gen Sarath Chand added that during the Kargil war, which although was a very limited war, “the Army had to scout all over the world to get ammunition for its artillery guns.”

“This would not have been the case if we had our own industry here to give us the ammunition not just at a much cheaper rate but also in enough quantities...they would have surged production of ammunition based on our requirements,” he added.

Even the latest T-90 tanks from Russia were facing problems of heating. The radiators of rose tanks had issues.

The Vice Chief added that ammunition production and manufacturing of small arms also hold a lot of potential for the Indian industry including for medium, small, and micro enterprises.

“The Indian Army is 1.3 million strong, 1.4 million if you also add to it the Navy and Air Force...but it becomes 2.5 million strong if you also include other forces including the para military, police and others. In 15 years, the requirement of small arms by them will be anywhere over 2 million and ammunition needs will be over a billion a year...This is the potential that Indian industry should sense”, he said.