Make In India: Defence Production Put In The Fast Lane 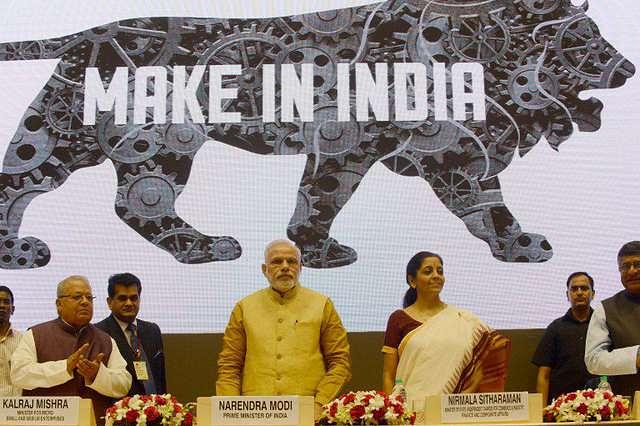 Defence Minister Nirmala Sitharaman is spearheading a process that will put in place a new system to push defence manufacturing under the ‘Make in India’ initiative of the government.

Faster approvals on issuance of industrial licences needed to start production, as also cutting short bureaucratic delays are in the works, senior Defence Ministry officials said. Elaborating on this, officials said that licences would be considered as “deemed approved” if security clearance from the Home Ministry is not received in a “reasonable” amount of time.

This move follows a recent meeting between Sitharaman and representatives from the
Indian defence industry, where concerns were raised over long-pending requests for security clearances to set up small and medium level defence related manufacturing projects. A proposal is being contemplated under which if a licence remains pending for two months, or any decided period after its due date for approval has passed, will be considered as "deemed approved" in certain cases. Details of the modus operandi of this new mechanism will be announced soon, officials said.

Alongside, another measure being undertaken by the Defence Ministry to push defence manufacturing is to draw up a master list of defence technologies developed by the Defence Research and Development Organisation (DRDO) that can be commercialised by sharing it with government or private sector companies for manufacturing and exports.

"Some of the technologies developed by DRDO have already been given to private sector and equipment are being manufactured and also exported. We will work with DRDO to make a list of items which can be commercialised," the official said.

The Defence Ministry will also discuss tax concessions with the Finance Ministry for domestic manufacturers as in the case of foreign Original Equipment Manufacturers, officials said. India has been looking at expanding its defence manufacturing base under the Make in India programme, and small and medium scale industries have been identified as a special component under it.

As already reported first, Sitharaman in her first interaction with the private defence companies on Saturday had assured that a decision on the three big-ticket Make in India projects – the Futuristic Infantry Combat Vehicle (FICV), Tactical Communication System (TCS) and Battlefield Management System (BMS) will be taken up by the Ministry of Defence (MoD) in the next two months (by 31 December 2017). The three programmes have been stuck for many months for placement of development contracts. A timely decision on these programmes is a major milestone in India’s quest for self-reliance in defence and is seen as a significant step in setting up a contemporary defence industrial base in the country.

Delays spanning over seven years in initiating this programme has been a major concern amongst a large section of the Indian industry as also many global technology providers who have forged partnerships and entered into MoUs for developing or providing critical technologies for this programme.

Therefore, the foremost suggestion from the Indian industry to boost the sector was to compress the procurement decision timelines in order to align or even better the stipulated timelines. Even for Make in India II projects, the Defence Minister has asked the industry to draw up a list of 10-12 projects, which will then be looked into by a committee of MoD to be constituted.

Getting Make in India programmes under way is a sure way to indigenisation and for kicking off a series of design and development programmes. In spite of great intentions, since 2010, expressions of interest have been issued only for three programmes (TCS, BMS and FICV); and as on date progress on development phase orders is yet to happen.

As many as 25 Indian and foreign defence companies including Larsen and Toubro, Bharat Forge, Mahindra and Mahindra, Adani, Tata Motors, Ashok Leyland, Dynamatic Technologies Ltd and others, besides Boeing, Airbus, BAE, Rolls Royce attended the Saturday meeting with Sitharaman.