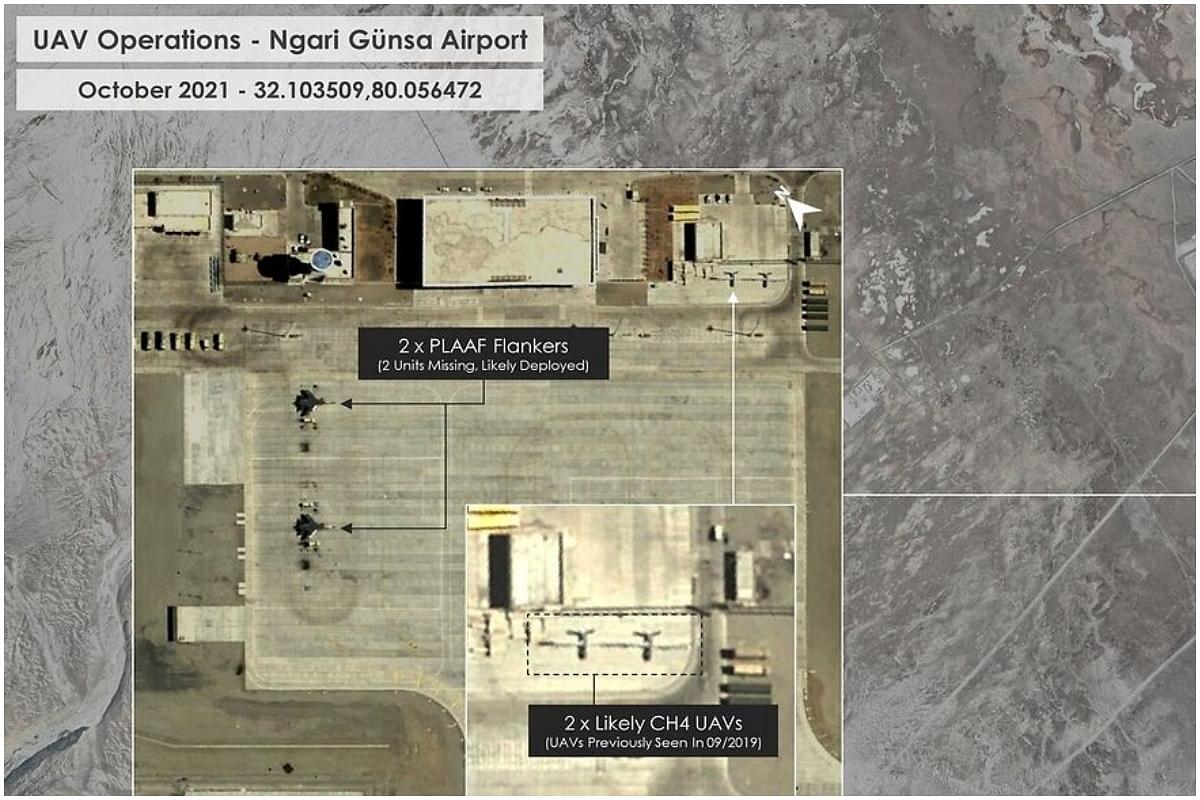 Satellite imagery from October 2021 shows that China's People's Liberation Army Air Force or PLAAF has deployed unmanned aerial vehicles (UAVs) and fighter jets at its Ngari Gunsa airbase, located only 200 kilometres away from the Pangong Lake.

The Ngari Gunsa base of the PLAAF, which also serves as a civilian airport, is located in Tibet’s Ngari prefecture, not far from the Line of Actual Control (LAC). The base, built at an elevation of around 14,000 feet, was operationalised by the Chinese in 2010.

The latest satellite image, posted by open source intelligence handle @detrasfa_ on Twitter, shows that the PLAAF has deployed UAVs — CH4s, most likely — at the airbase. Two UAVs, deployed since at least August this year, are visible in the satellite image of the airbase.

Earlier this year, satellite images from February 2021 showed that China is building hardened aircraft shelters at the base.

At least 12 hardened shelters are under construction at the airbase.

According to experts, the construction of hardened aircraft shelters at the base hints that China plans to increase the presence of its air assets, including drones, at Ngari Gunsa, over the next few years, to counter India’s deployments in Ladakh.

In May 2020, during the standoff, rapid construction activity was seen at the PLAAF base. As reported earlier, satellite images from April and May 2020 showed construction in a large area parallel to the runway.

Large-scale earth work, ongoing from April 2020, was seen in a satellite image dated 15 May, next to the 4,500-metre runway of the airbase.

Back then, reports said it could be a “second taxi-track or a secondary tarmac”.

Satellite imagery of the base from May 2020 also show at least four PLAAF fighter jets, possibly J-11s or J-16s (Chinese variants of the Russian Su-27).

The deployment of this detachment of fighter jets at the Ngari Gunsa airbase was first seen in December 2019, just months before China surprised India by deploying thousands of Chinese soldiers, supported by heavy equipment, along the LAC in eastern Ladakh.

According to China Aerospace Studies Institute (CASI), based at the US Air and Space Force's Air University in Alabama, the PLAAF usually deploys around 12 unidentified variants of Flanker (Su-27) at its base in Hotan.

To improve its presence and posture along the LAC, China is also building a helicopter base in Aksai Chin, 130 kilometres away from the Galwan Valley in north eastern Ladakh, where 20 Indians and dozens of Chinese soldiers were killed in clashes on 15 June last year. The area it is coming up in is around 147 km away from Daulat Beg Oldie, which hosts a military base, and an airstrip — the highest in the world.

The helicopter base is a part of a massive infrastructure buildup drive launched by China last year, which includes expansion of airbases near the LAC to accommodate a greater presence of fighter jets and unmanned aerial vehicles on the Tibetan Plateau.