Recalling The India-Pakistan War 1971: It Began This Day 47 Years Ago 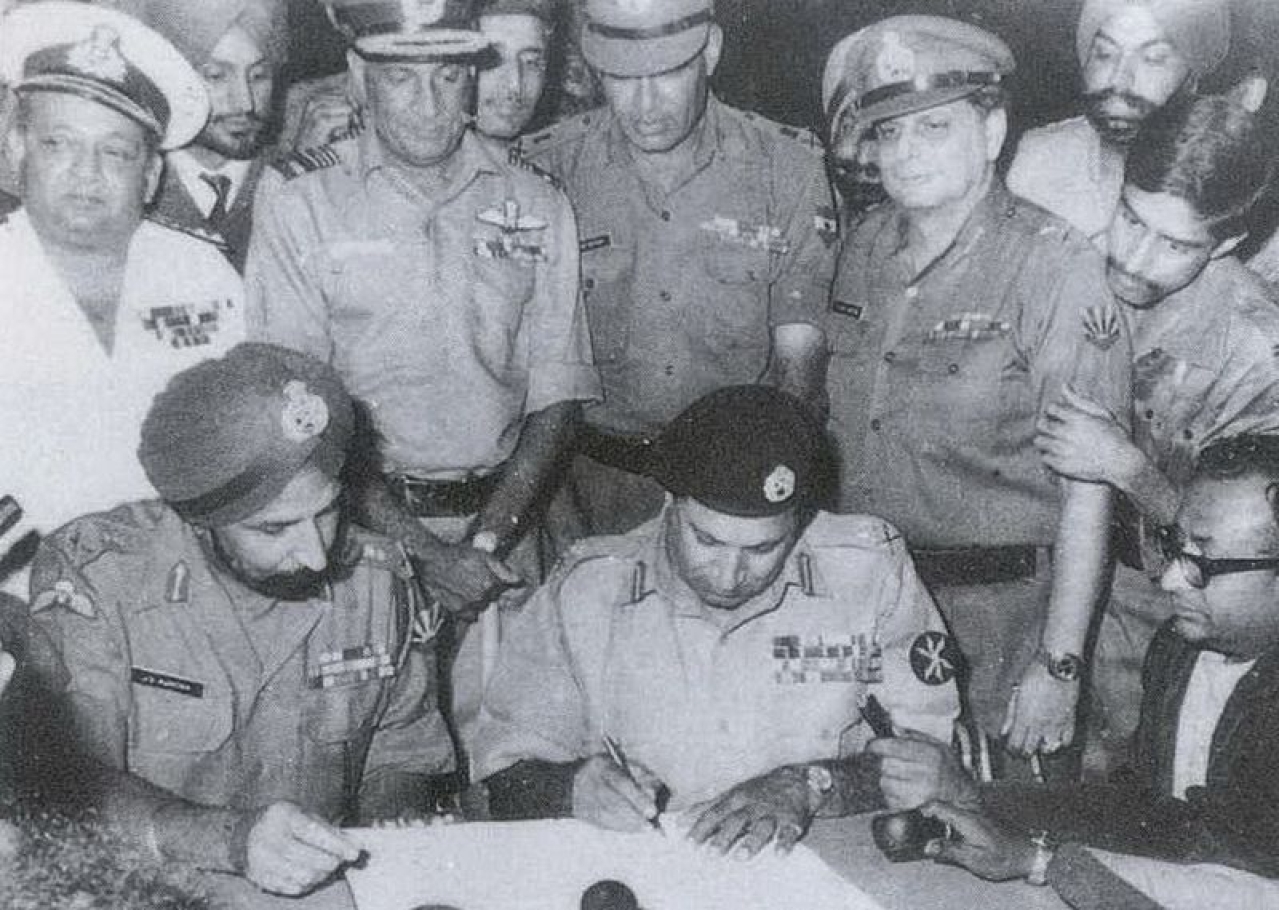 Lt Gen Niazi signing the instrument of surrender (1971) under the gaze of Lt Gen Aurora as other army officials look on.

Orientation to history isn’t one of the strongest points of even well-educated Indians. That is especially so because in the mind’s eye most people consider history as something to do with the pre-Independence period. Among the most significant events in the post-Independence period was the decisive victory of India over Pakistan in the India-Pakistan War 1971, the creation of the independent state of Bangladesh and the taking of 93,000 Pakistani prisoners of war (POW). The war began on 3 December 1971 and ended on 16 December 1971 with the fall of Dacca and the decimation of the Pakistani resistance. Every year, 16 December is marked as Vijay Diwas, though not as enthusiastically as it should be, but it is 3 December which receives little attention.

That is the reason why young India (65 per cent of India’s population) has little idea about how the war commenced and the strategic decision making that resulted in the decisive victory. India’s poor strategic culture prevents its people from taking ownership of landmark events in their own history. This is a brief description of the events which led to the India-Pakistan War of 1971. More will be written about the war and the victory on Vijay Diwas 2018.

In 1970, the basic contradictions built into the creation of Pakistan in 1947, with the West and East portions divided by an Indian landmass, came to a head when the Pakistan general elections handed down a decisive mandate to Sheikh Mujibur Rehman’s Awami League by the people of then East Pakistan. While the Awami League won 160 of the 300 seats, 84 seats were won by Zulfikar Ali Bhutto’s Pakistan People’s Party (PPP). East Pakistan being more populous had more seats in Pakistan’s legislature, the National Assembly. It meant that if a civilian government would be brought to power in Pakistan it would be the Bengalis who would effectively rule, something unacceptable to the Punjabi dominated Pakistan Army and to the ambitions of Zulfikar Bhutto.

From 7 December 1970 when the elections were held to 23 March 1971 a series of events took place, all keenly watched by India’s strategic community. The elections were preceded by a massive cyclone a month earlier, which left half a million people of East Pakistan dead. The Pakistan government was accused of showing inadequate concern for the suffering of the East Pakistani people and this too directed their ire against West Pakistan. The Pakistan Army in connivance with Bhutto, on one pretext or the other, did not permit Sheikh Mujibur Rehman to become the head of Pakistan’s next government (the only democratically elected government, if it had been formed).

A backlash occurred in Dacca with the Bengali population already restive over a series of contentious issues through the period since 1947, including the attempted imposition of Urdu as the national language. It led to a massive military crackdown under the codename Operation Searchlight which led to the extermination of a large segment of Bengali intellectuals, mass rapes of Bengali women and arrest of a number of leaders. Sheikh Mujibur Rehman was arrested in Dacca and flown to West Pakistan.

In the light of the highly unstable situation in East Pakistan, the residual leadership in the absence of Sheikh Mujib requested India for assistance. The political leadership under Prime Minister Indira Gandhi was keen to immediately intervene although it was well known that the Pakistan Army would resist this tooth and nail leading to a general war between India and Pakistan. In a high level meeting (presumably of the Cabinet Committee on Security or CCS) General (later Field Marshal) Sam Manekshaw was invited and was asked to be ready to intervene with the Indian Army in East Pakistan at the earliest.

It is Manekshaw’s response in this direction which later became the subject of his iconic leadership talk to various institutions. It wasn’t easy to stand up to the desire of as strong a prime minister as Indira Gandhi. However, Manekshaw held his ground with perhaps the sanest piece of strategic advice any army chief could have ever given to a head of government in any nation in the world.

Manekshaw first stated that an intervention meant war, not only in the eastern sector but also in the western. He asked the prime minister if she was prepared for a general war, re-emphasising that he wasn’t. He then went on to relate that she had not given him the funds to make up the need for spare parts for tanks and for the required reserves of ammunition which would be needed. In addition, a war in the month of April-May 1971 would mean that the Indian armoured forces would overrun much of the Punjab and Rajasthan farmland thus destroying the standing crops which would deplete India’s food reserves quite drastically.

If the war would extend anytime into the monsoon period the movement of the army across East Pakistan’s swollen rivers would be impossible as much as any east-west movement across India to reinforce any of the fronts. During this period, Pakistan could always fall back on its strategic partner China to pressure India from the Himalayan front which was devoid of snow and would require the Indian Army to keep part of it forces deployed there. He advised the Prime Minister that given time, Pakistan’s hold over its eastern territory would weaken with internal resistance within East Pakistan and he would like to engage in war only if he could guarantee victory. In April-September 1971 he could not; anytime thereafter he could.

The CCS made one more vain attempt to convince Manekshaw but he was unmoved. He stayed on for a one on one with the prime minister who then gave him the go-ahead to prepare the army and the nation for the ultimate option. Through April-November 1971, the Mukti Bahini, the local force created by the Bengalis in East Pakistan, systematically targeted the Pakistan army weakening its hold and morale. The Pakistani generals made mistake after mistake even as India cultivated international opinion in its own favour and against the genocide of Bengalis which was underway. The last straw against the US-Pakistan combine was the signing of the 20-year Indo-Soviet Treaty of Mutual Friendship which balanced any potential US military threat at that time.

The war finally broke out on 3 December 1971 when Pakistan Air Force attempted pre-emptive strikes against the Indian Armed Forces. Launched into war on 3 December 1971, in 14 days the Indian Armed Forces decimated all resistance of Pakistan. With the help of the Mukti Bahini and the leadership of Bangladesh in exile, it helped create the independent nation of Bangladesh.

More on Vijay Diwas 2018, on how India’s decisive victory was operationalised.

Get Swarajya in your inbox everyday. Subscribe here.
Tags:
967 Shares