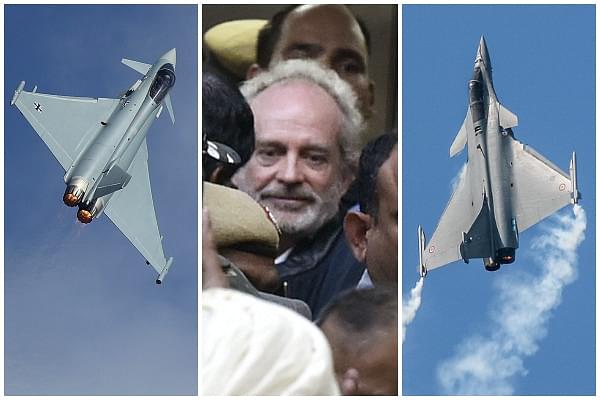 At the end of the long drawn Medium Multi-Role Combat Aircraft (MMRCA) competition, in which five fighters competed with each other to qualify as an option for the acquisition of 126 fighters by the Indian Air Force, Rafale and Typhoon had emerged as the two platforms compliant with the requirements. In 2012, when the bids were opened, Dassault Aviation emerged as the lowest bidder (L1) and negotiations started for the acquisition of 126 Rafale fighters.

But the four-nation Eurofighter consortium had not accepted defeat, it seems.

Just days after the Enforcement Directorate (ED) told a Delhi court that middleman Christian Michel, arrested in the AgustaWestland VVIP chopper scam case, may have received money from other defence deals, it has emerged that he was also lobbying against the selection of France-based Dassault Aviation’s Rafale fighter for the Indian Air Force to push Eurofighter Typhon’s bid.

According to a report in India Today magazine, papers seized during a raid on another AgustaWestland middleman, identified as Guido Haschke, have revealed that Michel was planning to lobby with politicians, three air force officers and others to place Typhoon’s bid in the “win zone”. The documents talk about the need to engage “an in-country bureaucratical and political navigator”.

“This man should have worked in the MOD and know well on first name basis and not just the MOD, key bureaucrats and the minister but also the PM, Finance Minister and the Leading Family,” the documents read, according to the report.

But wasn’t Michel on AgustaWestland’s payroll? He was, and therein lies the clue.

The Typhoon has been designed and developed by a large consortium of companies from the United Kingdom, Spain, Germany and Italy. These companies are German and Spanish branches of aerospace giant EADS (now Airbus), Britain's BAE Systems and Finmeccanica (now Leonardo) of Italy. While EDSA holds 46 per cent shares of the consortium, BAE Systems has 33 per cent and Finmeccanica has 21 per cent.

AgustaWestland, which had employed Michel to lobby for its AW101 helicopters in India, is a wholly owned subsidiary of Finmeccanica.

Interestingly, Michel’s ‘link’ to a company part of the Eurofighter consortium has emerged just a year after a court in Germany ordered Airbus, the largest stakeholder out of the four companies, to pay $99 million to settle an investigations into alleged corruption surrounding the sale of Eurofighter combat jets to Austria in 2003.

The Eurofighter consortium’s bid in India was led by Airbus.

In 2018, Airbus was also accused of bribing officials of the Indian Coast Guard as part of a deal to procure 14 Eurocopter EC725 twin-engine heavy helicopters. The issue had come to light when a whistleblower wrote to the Ministry of Defence alleging corruption, and fixing in the Rs 2,000-crore Airbus deal to sell helicopters. Several classified government documents were also attached.

“The Airbus Group has informed the defence ministry that it conducted an inquiry into malpractices following a complaint by an internal whistleblower and will share the details on the possible origin and timing of the leak, sources aware of the matter said. Airbus has requested the government not to take any action until the internal probe is completed,” a report in the Economic Times says.

Given this history, and the Enforcement Directorate’s claim that Michel received money from other defence deals, these allegations that he may have been involved in lobbying against the Rafale deal merit investigation.

But in the end, another question remains. Sonia Gandhi and Rahul Gandhi have been alleged beneficiaries of Michel’s work for AgustaWestland. We now know that Michel was also lobbying against the Rafale.

And do you know who else has been trying to convince the country that all is not well with the Rafale deal?