The Hundred Kills Syndrome Can Only Be A Contributary Factor Towards Peace In Kashmir: More Is Needed In Other Domains Too 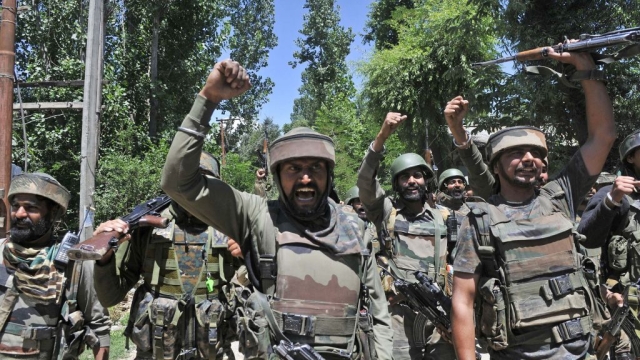 The Security Forces (SF) have reached a landmark achievement in 2017 which is being touted around a bit. They have eliminated a hundred hardcore terrorists in this calendar year, in less than seven months thus far. A fine military achievement that no one can contest. A round of appreciation is needed as especially in the last few weeks there have been successful encounters almost every day and the fatal casualty ratio between terrorists killed and SF personnel martyred has been showing constant improvement after the abysmal level to which it had sunk in February this year.

For those who may be excited by numbers, it is not my intent to dampen their enthusiasm, but wish to inform them that just in South Kashmir in 1999 the Army's Victor Force of the Rashtriya Rifles (RR) was killing on an average 35-40 terrorists a month. Yet, it is as challenging today as it was then and you can take that as authentic since I was then controlling operations in South Kashmir. When I examine the environment in the same area of responsibility today, I find the General Officer Commanding, his commanders, officers and men perhaps have an even more daunting task with lesser strength of terrorists but perhaps more challenges than even we then had.

Before any analysis of the reasons for this success, it needs to be emphasised that any pragmatic analyst of conflict will advise the SF two things. First, there are miles to go before they sleep. For no fault of theirs the situation had drifted and alienation enhanced. They have to be conscious that military hard power’s achievements in the form of enhanced terrorists killed must create the conditions for the return of soft power as the means to stabilise and resolve conflict; the achievements also enhance resistance by the unarmed anti-national elements.

Second, the SF need to be mindful of the fact that wily minds across the Line of Control (LoC) are already working on creating a surge in terrorist ranks; space created by military achievement can quickly roll back. The only positive I can deduce at this stage of the analysis is that we have all the means available to prevent such a surge, and we should never shy away from employing additional forces and concepts to maintain military dominance. Military dominance is a term always likely to be misconstrued as the negative employment of hard power. That mistake must never be made.

In the same breath about mentioning success, the SF needs to be sensitive to the failure or relative failure to prevent the tragedy of the attack on the innocent victims of the Shri Amarnath Yatra. Such aberrations are a part of the security scenario and highlight the fact that a hundred successes will be offset by one failure. There is a need for better coordination as never before between agencies and different forces. Shedding the colour of the uniform and all egos achieves manifold more.

Why the success has come the SF way is important to analyse. No doubt there has been much hard work and in my opinion the return of the effectiveness of the intelligence grid is the biggest contributory factor. It proves the resilience of the Jammu and Kashmir Police (JKP) and intelligence agencies, and their ability to bounce back from a deep abyss. Without actionable intelligence it is difficult to keep the terrorists on the run. It is not just a question of scoring numbers in the quantum of terrorists killed but also preventing them from being effective by raiding potential hideouts and disallowing their mobility through check points, patrolling, night ambushes, cordon and search and river control.

The second reason for the high numbers is the achievements on the counter infiltration grid where in a short spurt the Army neutralised a dozen attempts and eliminated a large number of infiltrators. The trend this year has seen the activation of Uri and Naugam routes. The Army should be prepared for surge attempts at the Shamshabari. Machil, Keran and Tangdhar will be attempted in the next few weeks.

If praise for JKP, intelligence agencies and the regular Army at the LoC is due, no one can take away the credit from the RR and Central Reserve Police Force (CRPF) in the hinterland. Operating in an environment, where no standard operating procedure currently applies, it is difficult to refine drills and coordinate for a fresh situation every other day. The CRPF has done a fine job despite not being adequately equipped for the duties it is performing.

All the success in the field of hard power has to finally translate into a successful run of soft power to sustain a campaign against the hybrid sponsored proxy conflict. People in rest of India continue to be frustrated by the ups and downs of the situation in Kashmir Valley. Frustration translates to verbal abuse, especially on social media, and that has a negative response in the Valley, furthering alienation. People with no orientation to this type of conflict cannot understand why hard power, the use of the gun and the elimination of the terror groups, does not result in total success in integrating Kashmir to rest of India. We are yet far from educating our people that the centre of gravity in such conflicts is not the armed elements but the people who must return to the fold. To do that, a totally different approach has to be followed and that has nothing to do with appeasement which many misconstrue.

While deeply regretting the unfortunate loss of innocent lives due to the attack on the Amarnath Yatra, it was heartening to see the post incident handling of the situation. Although the attack on the Yatra, which resulted in loss of seven innocent lives was a negative blip in the security picture, we had very restrained statements. Even the social media did not go as negative as could have been expected from such a traumatic event.

The visibility of the Chief Minister and the Deputy Chief Minister was a contributory source for the confidence. The visit to the incident site at night, personal oversight over the handling of casualties at the hospital and attendance at the airport ceremonies did show that the government was in control.

What never fails to impress me is the maturity of the people of Jammu. In 2008, there was a display of negative reaction. What may not have gone home to the people of Kashmir is the fact that Jammu’s response to all the violence in the Valley remains muted and ever mature. That should indicate how much of a place citizens of Kashmir have in India. It also should reinforce the argument, which I repeatedly make that the stabilisation of Kashmir lies in the route through Jammu, a notion appreciated and commented upon most positively by the Jammu-based media. It is something the civil societies and the level-headed citizenry of the two regions need to make together as they understand each other far better than anyone else in rest of India.

The confidence generated by the post event handling should give a fillip to the political handling of the Valley. Already the Chief Minister has put her party members on notice and demanded that the representatives from the Pulwama, Shupian and Kulgam based constituencies can no longer shy away from their responsibilities because of the security situation. This brings me to my age-old observation that unless grassroots politics returns to the rural areas of Kashmir, the space will remain occupied by the vigilantes, mosques and rabble rousers.

A conscious effort has to be made by the political and administrative authority to bring the SF and the political functionaries together. Experimentation on this was done in 2011-12 with the Awami Sunwai (townhall-type public meetings) programmes, which at the beginning were oriented to the Army’s initiative but progressively were joined by political representatives. The security and organisational platforms were provided by the Army for these representatives to then travel and meet the public in faraway areas. It created tremendous hope and helped in resolving some of the longstanding administrative issues, which the people could not otherwise place before the political leadership.

Negative events sometimes help turn the tide and create a groundswell which is not in favour of chaos and turbulence. Perhaps the Shri Amarnath Yatra tragedy is one such event. In the sacrifice of the innocent pilgrims we may yet find a trigger which can bring more introspection within those who have believed in the effectiveness of the gun.

The combination of military effectiveness and public introspection needs to be taken by the scruff of the neck to the next level through effective harnessing of soft power. For that you need a mechanism which is sensitive towards strategic communication and its ability to turn the tide. The situation perhaps is ripe for it but are there enough takers to undertake the challenge with sensitivity and an eye on the future.