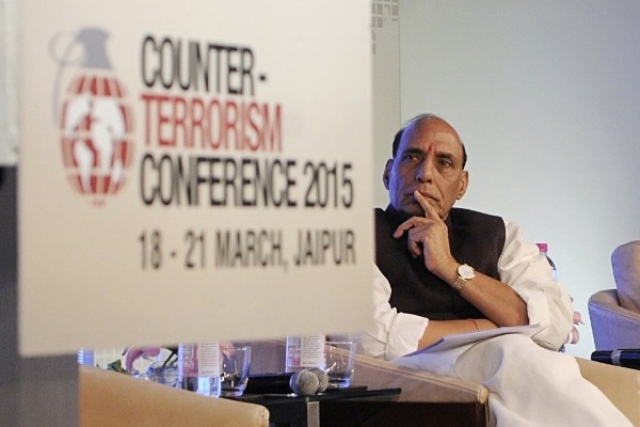 Rarely do political appointments get noticed institutionally in the Indian Armed Forces which are known for their apolitical attitude and carefully guarded military value system. I can’t remember the last time when we discussed the worth of any personality appointed Raksha Mantri (RM); perhaps George Fernandes evoked those feelings but only after he had been in the job for some time.  Yet, Rajnath Singh, former Home Minister (HM) in the National Democratic Alliance-2 (NDA-2) government is being welcomed into the appointment of RM with a degree of glee and great hope by both the serving and veteran community of the Armed forces; it is also meeting the approval of the public at large.

Rajnath Singh is obviously a popular politician not only due to his very positive personality traits but also due to the displayed efficiency with which he has handled the Ministry of Home Affairs (MHA) for the last five years. The Central Armed Police Forces (CAPFs) have been extremely happy with his sensitive handling of their esteem issues, equipment management and the degree of operational freedom while maintaining efficient control over everything.

Rajnath Singh now steps across the road on Raisina Hill to enter the other big office which handles India’s national security. He brings with him a five year exposure at the Cabinet Committee for Security (CCS), a period which has seen India targeted by high levels of sponsored hybrid war from different quarters. The big picture should be absolutely clear in his mind as also the shortfalls in India’s security matrix. This period has seen the CCS functionally active in large measure with challenging events such as the frame work agreement with the National Socialist Council of Nagaland-IM (NSCN-IM) in Northeast, and the decision to launch a suitable kinetic response to the ambush on the Army by the NSCN(K) in Manipur; handling of enhanced levels of turbulence in Jammu and Kashmir after the Burhan Wani killing; the Pathankot terror attack and its investigation; the Uri terror attack resulting in the Surgical Strikes in 2016; the decision to launch Operation All Out in 2017 and the escalatory spiral resulting from Pulwama and Balakot in 2019.

The decision to finally target the financial conduits and networks of terror and separatist groups making use of the National Investigation Agency (NIA) was one of the flagship decisions in the fight against transnational terror. Rajnath Singh would have had played his role in all these.

With the above take off level of experience and exposure, Rajnath Singh has to get into the innards of the Ministry of Defence. He will discover a world apart; an organisation insufficiently integrated for the role it is expected to perform. With the bureaucracy and the military ranged against each other there is also the other challenge – the turf wars between the three Armed Forces and the hugely influential veteran community which has found a voice especially with the ongoing information revolution. Most challenges emanate from these three conceptual issues.

The state of civil-military relations is abysmal to say the least. The Armed Forces are absolutely comfortable with political control; it’s the overbearing bureaucratic control which has emerged from the abdication by the political community which is a challenge. It is the relative discomfort with military culture and the seemingly alien professional challenges in an unfamiliar domain that forces politicians to remain away from military issues and rely on the bureaucrats to do the same. Rajnath Singh would not have found this nature of problems in the MHA because of the functional construct of that ministry. That is where frustration may be higher in the MoD and that is why he for one may wish to see the implementation of the long pending recommendation of the Kargil Review Committee and the Group of Ministers, since 2001. The truly effective integration of the MoD with uniformed presence forming an effective part of processing and decision making. That will be a landmark decision which may transform India’s strategic culture and decision making capability.

Relating to turf wars there is no doubt that India is one of the rare countries where integration of such large military forces has lagged. Theatrisation is being resisted to the hilt but there are few alternatives, both for economy and operational effectiveness. It will eventually happen so why the process shouldn’t be facilitated even with baby steps beyond just the Andaman and Nicobar Command (ANC) is left to question. If the inter service resistance is too high this is the place someone like Rajnath Singh can display decision making acumen and initiate a legislative process to force it; much like the oft quoted Goldman Nichols Act of 1986 in the US Congress which finally brought the theatre system to the US Armed Forces.

The third issue is about veteran affairs, something Rajnath Singh may not have encountered in the MHA. It’s a larger issue related to esteem of the Armed Forces and the perceived mistreatment meted out the both the serving and veteran communities. It is the One Rank One Pension (OROP) issue which led to the veteran standoff and the 7th Pay Commission and Non-Functional Financial Upgradation (NFFU) issue which has rankled the serving community. Authorised rations being take away, lower compensation for difficult areas in comparison to the civil services which do not face even half the privations the Armed Forces do, are among the other issues which will be brought up to him. One does not expect a reversal of decisions any time too soon but its Rajnath Singh’s uncanny power of listening and ability to grasp and empathise that should encourage the veteran community to remain constructively engaged with him.

There are huge financial, infrastructure and equipment issues about which Rajnath Singh will need to sensitise the Prime Minister and CCS. A defence budget of 1.57 percent is not going to get India’s kinetic capability out of the woods it is in. Higher budget level has to be merged and streamlined with smarter spending processes delinked from end of the year strictures with which it is currently bracketed.

Ammunition levels are in the process of being increased through procedural changes made by late Manohar Parrikar. Storage for this has to be created to avoid peace time losses due to environmental issues and sabotage.

Lastly, in these domains, the procurement and acquisition procedures have been under refinement but yet do not meet the urgency which is attached to the making up of huge deficits of modern equipment the three Services suffer from. The revision of the Defence Procurement Procedure (DPP) must not be seen to be a onetime action; it must continuously remain under refinement under a standing committee of veteran experts.

The exploitation of talent from the environment through lateral induction must remain an issue for consideration. The fields in which this must come to the fore are cyber and information warfare. While development of expertise within the Armed Forces is imperative there is a need for greater civilianisation for better continuity under supervision and overall control of the Armed Forces. It must result in yet another domain of intra-conflicts as it happened in the Border Roads Organisation where the uniformed and civilian content where expected to work alongside. Terms and conditions not fully thought through led to the current functional problems which should not be repeated in the emerging domains.

Rajnath Singh must continue to work with the same visibility that he demonstrated as HM and involve himself with necessary symbolics which appeal to the Armed Forces in equal measure if not more. He must go beyond the token presence of being seen at events such as large scale manoeuver exercises of mechanised forces and spend time with field forces in the manner George Fernandes, another former NDA RM, did two decades ago. The Armed Forces love hands on political leaders and Rajnath Singh may prove to be just the kind of RM that India was looking for.