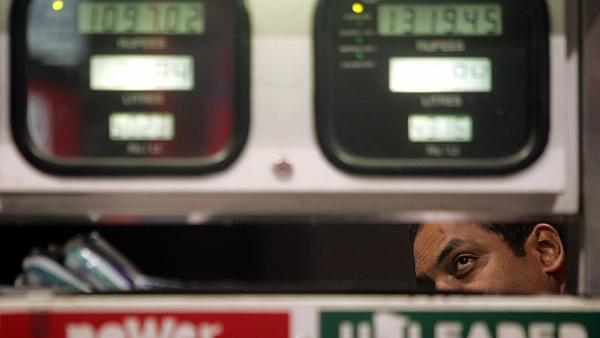 A car owner takes a close look at the metre at a petrol pump. (Manoj Patil/Hindustan Times via Getty Images)

The Modi government, a stickler for fiscal prudence, doesn't seem to be in any mood to cut central excise tax on petrol and diesel despite rising global crude oil prices. The international price of the Indian basket has now shot up to over $53 per barrel after hovering around $50 for many weeks.

“There is no proposal to lower the excise duties on petrol and diesel. We are not looking at anything of the sort at the moment,” The Hindu Business Line quoted a senior government official as saying. “Though prices have begun to increase in the international market, they are still within range and there is not too much pressure from taxes on domestic consumers,” he added.

Since July 2013, the price of the Indian crude oil basket has fallen by approximately 40 per cent; even then, the retail price of petrol and diesel has marginally increased because the government kept raising the excise duty on oil, thereby not passing the benefit down to the consumers.

The excise duty on diesel has increased from Rs 10.3 per litre earlier to Rs 17.3 per litre today. Similarly, on petrol, it has gone up from Rs 9.70 per litre to Rs 21.10 per litre. Consequently, the government has reaped huge revenue gains from this. In fiscal year 2013, the total share of excise duty collection from petrol and diesel stood at 26 per cent, helping the government earn a revenue of Rs 176,535 crore. This share jumped to 54 per cent in just three years, greatly increasing the revenue to Rs 284,142 crore in fiscal year 2016.

Any rollback in excise duty will have consequences, and the government’s fiscal deficit target will surely go for a toss. Consider other factors too: the government was expecting a dividend of Rs 58,000 crore from the Reserve Bank of India, but the central bank will only be able to provide a dividend payment of Rs 30,659 crore.

Additionally, it's not certain if the government will be able to meet its highly ambitious target of Rs 72,500 crore from disinvestment given the poor track record in meeting such targets. The state governments are already feeling the pinch of the growing demand for farm loan waivers, and the high expectation of the auction amount from telecommunication companies currently seems far-fetched given that the sector is in a debt of around Rs 4.8 lakh crore and crying for a bailout.

Goods and services tax collections of Rs 95,000 crore in the first month look promising, but about Rs 62,000 crore worth of input credit threaten to derail the biggest tax reform.

Given this gloomy scenario, it is highly unlikely that the government will give any respite to the consumer as far as trimming the excise duty on oil is concerned.