A Speech That Prime Minister Modi Could Make On Banking Reforms 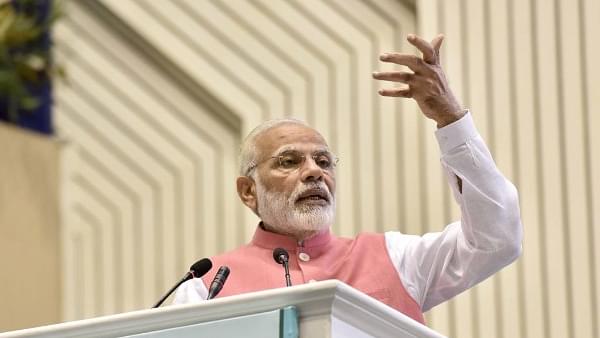 I addressed you on 8 November 2016. It was a historic moment for the country in its fight against corruption. I am grateful for your overwhelming support for that decision. Today, thanks to that decision, we can collect taxes from those who were evading it for a long time. The results are showing. We have used the higher taxes to spend on better roads, better trains, ensuring reliable power for all of you, and cooking gas for rural women and the poor.

In the three years since we came to office, up to 2017, the share of wealth owned by the top 1 per cent, 5 per cent, and 10 per cent of the population has come down while the share of wealth owned by the bottom 90 per cent has grown. Median wealth in the country has grown. We are reducing inequality. We are empowering and enriching the poor of this country.

What I am going to announce today will further empower the poor with more choices and will enrich them further as the measures would facilitate better and faster economic growth and employment generation.

Now, I am again addressing you on another historic shift we are making. Nearly 50 years ago, prime minister Indira Gandhi nationalised private sector banks. It was an essential step then. Public sector banks are government-owned banks and they have served the nation well in the last 50 years. Without their presence, the country could not have achieved industrial development and growth in agriculture, and our small and medium enterprises would have been deprived of credit.

However, no policy is good for all times. Now, 50 years later, the time has come for us to stop and think about whether that decision has served its purpose and if it is time to change course.

As most of you know, during the UPA years, public sector banks had lent a lot of money to industrialists and some of the loans are not coming back. Either the borrowers are unable to or are unwilling to repay. We had taken strenuous efforts to collect the money that was due to be collected by banks. That is your money; your hard-earned savings. Banks are now auctioning off assets that the borrowers have and are taking the money from the sale of those assets. But, still, the losses are huge. We had to give banks new capital of around Rs 2.11 lakh crore – money that could have been used to provide better education and better health for you, for your children, and for the elders in your homes.

Even after providing this money to the banks, we realise that we have not closed the chapter on banks not being able to collect their dues. All of us were shocked, saddened, and angry at the fraud that had gone on, undetected or unreported for seven years at Punjab National Bank. The government swung into action immediately and has issued a series of orders to ensure that such fraud does not occur again. But, we were not satisfied. We thought about what we can do to make our banks safer, stronger, and able to serve the future economic growth and prosperity of our nation. Something had to change. It was time for change.

Strong and safe public sector banks will support the people of India, their government, instead of depending on government support to survive and grow. The government’s budget resources are limited and there are far more deserving uses for it than to provide capital to banks so that the rich can take loans that they have no intention of repaying. It has happened at least thrice in the last three decades. Prime minister Vajpayee’s government had to provide for banks’ capital after the banks had run up bad debts in the nineties and now my government is cleaning up the big banking mess left behind by my predecessor. But, we do not want to forget, and nor should you forget, that it is your tax money that we are using to strengthen these banks – money that could have been and should have been spent on our children, women, and farmers’ welfare.

Keeping this in mind, your government has made the following decisions with respect to the banking system. We will be reducing the government ownership to below 26 per cent in two majority government-owned banks. Then, in the second stage, the remaining 25 per cent too will be sold as and when more favourable market conditions emerge. The Reserve Bank of India will make a follow-up announcement shortly on the banks that will be privatised. There will not be reduction in government ownership in other public sector banks.

All public sector banks formed under Special Acts of Parliament will be converted to joint-stock companies so that they are governed by the Companies Law. This levels the playing field for government-owned banks with respect to private sector banks. The Reserve Bank of India will remain the banking regulator.

Banks where non-government entities and individuals hold a majority stake will be subject to priority sector banking requirements. If they choose to comply with the requirement by subscribing to bonds issued by designated banking institutions, those bonds will carry a lower coupon and there will be an annual service charge too, on banks not directly discharging their priority sector obligations. Separate guidelines will be issued in this matter by the Reserve Bank of India.

The service charge collected from banks as such will be earmarked for a separate insurance fund for farmers. Specific details about the insurance fund, the risks it will cover, etc, will be announced shortly.

For the long-term, the government realises that it has transferred its responsibility for national development to the banking system through priority sector lending obligations. They should be part of the budgetary process of the government – Centre and states. We realise that, and we are working towards funding development through budgetary resources. We will get there.

Here, I would also like to announce that the government had accepted the suggestion made by the Fourteenth Finance Commission to evolve criteria for future fiscal support from budgetary resources for majority government-owned financial institutions and, in the process, go into the multiplicity of enterprises in each financial activity. The Finance Ministry will announce the constitution of the committee to go into this, with appropriate terms of reference. The committee will be expected to submit its report within 90 days.

The Government of India will appoint a committee, in consultation with the Reserve Bank of India, to explore the desirability and feasibility of India moving towards 100 per cent reserve banking. In this system, depositors’ money, without limit, will be backed by 100 per cent reserves. The Reserve Bank of India will announce the constitution of the committee and the terms of its reference and timeline shortly.

Separately, the Securities and Exchange Board of India will issue guidelines on the reduction of foreign ownership in Indian banks to below 51 per cent. That is, no Indian bank will be majority-owned by foreigners, no matter who the owner is – banks, other institutional investors, or individual investors. They will be given adequate time to bring their holdings in Indian banks to below 51 per cent.

In advanced nations, banks are not owned by the government. But, that has not stopped them from running up losses and destabilising economies. Further, we have also learnt from their experience that banks make more loans for real estate transactions since they are collateralised. Risk weights on loans backed by collateral are low and banks need to set aside less capital for them. So, they prefer to make loans for housing mortgages. Further, we have also learnt that too much of credit extended to households – either for purchases of homes or for consumption – eventually drag economic growth down and also make the financial system unstable.

We do not want to repeat their mistakes. We want to learn from their experiences and design our new banking system better instead of being reactive. The Reserve Bank of India will come up with appropriate and counter-cyclical risk weights for various bank asset classes in this regard that will ensure that private sector banks do not destabilise our economy and the financial system in their pursuit of profits.

In this regard, I would also use this opportunity to reassure the nation that your government has made a conscious and deliberate choice to keep government-owned banks as part of the banking system. There will be a place for both. An efficient and stable banking sector requires both privately owned and public sector banks. Evidence continues to accumulate around the world that a wholly privately owned banking system dedicated solely to generating profits for its shareholders can be detrimental to the economic and financial stability of the nation.

I realise that these are big changes. But, our country is poised for big changes and it needs a bigger, better, and safer banking system. With these changes, we have ensured that financial inclusion is not affected. The poor, the small traders, the businesspersons, the women, and the farmers will continue to be served by our banks. At the same time, I have also ensured that banks do not take away the government’s money, that is, your savings, your taxes. They should be spent on you and not on supporting banks that run up losses, making loans that are not repaid. That is the fundamental reason for the changes I have announced today.

There is another reason. Not only will these changes safeguard government resources for economic development, but also add to it. A competitive banking system backed by sound and smart regulation will ensure essential credit growth for the nation. Faster growth will mean more tax revenues and more development spending – better roads, better schools, better education, better health, and safer drinking water for us and for our children.

India is a big country and is rich in diversity and plurality. Our policies should be accordingly plural and diverse. We have opted for a mix of public sector and privately owned banks. We are ensuring that Indian banks are majority-owned by Indians. We are balancing profitable growth and sound regulation of banks. We are balancing private considerations with public priorities.

We remain open to evidence and the need for course corrections and further policy changes based on the evidence. But, today, I am confident that these changes will be immensely beneficial for the ordinary and hardworking men and women, young and old, urban and rural, who contribute tirelessly to nation-building.

I dedicate these changes to them.

Postscript: This ‘speech’ draft has drawn on some of the ideas presented by Dr Y V Reddy in a speech on the state of banking in India on 1 February 2018.