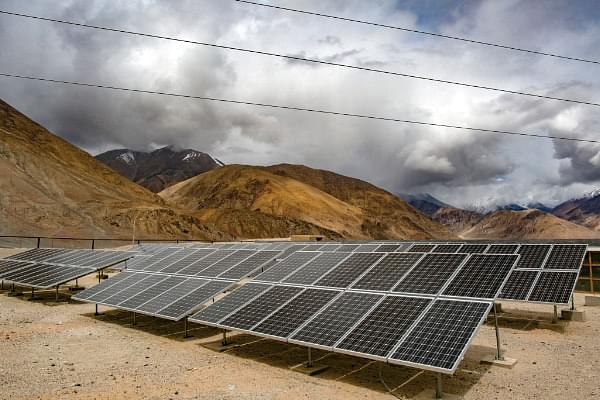 In the fight against the rising global temperatures and change in climate patterns, countries must inculcate both short-term and long-term solutions. Investing in nuclear energy, elaborate research and development, and gradual exit from coal-fuelled industries are ideal options for the long-term. However, to get things going in the short term, investments in renewables are warranted.

India’s geography makes it ideal for solar energy. With more than 300 days of sunlight, there is enough reason for the country to inculcate solar energy. Also, with a nation aiming for a Gross Domestic Product (GDP) of more than 8 per cent, a consistent supply of power is essential without relying too much on oil and coal imports.

In the northern region, Rajasthan registered the highest solar power capacity with more 2,250 MW at the end October 2017. For the same period, Punjab, Uttar Pradesh and Uttarakhand recorded capacity of 876 MW, 510 MW, and 250 MW respectively. Aided by a favourable climate, the states are now harnessing solar power for their energy needs.

However, regarding solar power, the southern region outshines other states. Telangana alone has a capacity of 2,570 MW, followed by Andhra Pradesh with 2,140 MW, Tamil Nadu with 1,710 MW, and Karnataka with 1,500 MW. For 2017 alone, the four states have more capacity than Australia, South Korea, and Spain.

Given the lack of sunlight in the north-eastern regions of India, solar capacity remains low here, with Assam leading with 12 MW. For Meghalaya, the capacity is only 0.06 MW.

The numbers show further enhancement from October 2017 to June 2018. Karnataka, India’s leading solar state is set to have over 5,000 MW in terms of installed solar capacity. Rajasthan’s capacity increased to 2,290 MW by the end of June 2018.

For a nation constrained by power cuts seven decades after its independence, renewables offer an ideal solution. By the end of 2012, over 4,600,000 solar lanterns and close to 1,000,000 solar-powered home lights had been installed. By 2022, the government aims to sell 20 million solar lights, offering a subsidy of 40 per cent.

India intends to go big on solar energy, and rightfully so. Already, more than 60 solar radiation resource assessment stations have been installed to evaluate India’s potential. Given that the government aims to have 100,000 MW capacity by 2022 alone, it would be ideal to harness energy from areas favoured by constant sunlight across the year. Most of these stations, thus, have been set up in Rajasthan, Gujarat, and parts of Tamil Nadu and Karnataka.

The solar story goes beyond numbers, however. India, in its pursuit of 100,000 MW solar generation capacity will be faced with many challenges. Firstly, India’s weak electrical grids, distribution losses, and the monetary burden operators find themselves under adds to the strain. Two, to harness solar energy, India must invest heavily towards efficient storage of energy. While research on batteries has lowered the cost of storage, increased the transportation feasibility, and enhanced life, there is a lot that must be done to ensure effective implementation of solar energy on a national level.

The world today is at a tipping point when it comes to climate change. While developed and developing nations can keep arguing about who should do more to combat climate change and which government has the right to continue with its use of fossil fuels, the consequences do not look at the size of an economy before wrecking havoc. Thus, irrespective of where the origins of global warming were, it is in the betterment of nations like India to invest in renewables like solar energy.

So, how does India go about the challenges? Firstly, the authorities must look beyond the grid. Coal, in the long-term, cannot serve as an excuse to get power to rural India. Instead, research must be undertaken to developed localised grids to ensure minimum losses and maximum gains. If 400-million people in rural India can be helped with affordable options in solar energy, they shall have enough incentive to discard the use of kerosene, coal, and even wood for their energy needs.

Second, people in the urban regions must be made active participants of this movement. Given how housing societies and corporations form a core of the residential areas in cities like Bengaluru, Pune, Chandigarh, Noida, Gurgaon, and Mumbai, state governments should pursue them to inculcate solar energy options. With some of these private groups housing more than a thousand families, a significant change could be witnessed in a few years.

Three, if the government finds it hard to pursue civilians, how about starting with government buildings and residential areas housing government employees or civil servants? For a nation that still struggles to look beyond the conventional means of generating electricity, the government may have to do some heavy lifting in terms of setting an example. After Swachh Bharat, perhaps, it is time for Swachh Energy.

There is always the question of China when it is about renewable energy. Given the country is trying to recreate an export-driven economy based on renewables, the solar industry is highly subsidised. Thus, there is an excess production of solar cells, panels, batteries and other essential components, leaving the local manufacturers distraught.

India can tackle this problem in two ways. One, it imposes harsh tariffs like the US has or two, invests heavily in research, and ensure gradual phasing out of Chinese solar products from the Indian market. While the investments in research and development may take a few years before yielding any results, India’s pursuit of clean energy in the solar realm should not suffer for lack of innovation on the domestic front.

From agriculture to electrifying rural India, and from urban cities reeling under power cuts to moving towards a Swachh Energy Bharat, there is enough incentive for India to inculcate solar energy as a short-term solution against climate change. Already, the foundation for International Solar Alliance has served as the ideal start. However, India will have to take giant strides across the 2020s across renewables and clean energy options, along with exploring the nuclear option for the long-term. By the end of the 2020s, the question should not be of helping 1.4 billion people with electricity, but clean electricity.

In the age of solar, more than numbers, India should look at an energy transformation that is too significant to be measured in numbers alone. With a target of generating 100 GW of solar energy, the focus should be on offering 1,000 million people clean energy options to power their houses – an accomplishment worthy of a celebration.