Arresting The Slowdown: Why Slashing Corporate Tax Rate Is Better Than A Personal Tax Cut 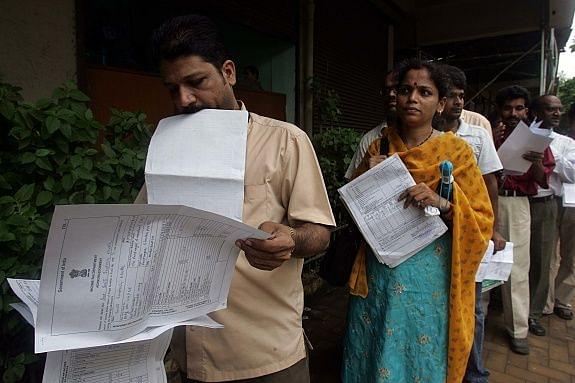 A personal tax cut would put more money in their hands but only temporarily. (Photo by Satish Bate/Hindustan Times via Getty Images)

For some reason, the popular view has been that a personal income tax cut would have been a better policy intervention rather than a corporate tax cut.

There is another argument that advocates for a cash transfer program instead of a personal or corporate income tax cut as this transfer would go to the bottom of the income distribution, which tends to have a higher propensity to consume.

Under each of these three policy interventions, one thing that we must recognize is that all of them are a fiscal stimulus in some form or the other. The first two focus on government revenue being forgone while the latter focuses on expansion in government expenditure.

The problem with the latter is that an expansion in government expenditure in a country like India on a cash-transfer program becomes irreversible and therefore, such a move should be done with a precise understanding of existing poverty alleviation programs and it must be a replacement for all of them.

That is, it must be a cash transfer program for the poor.

This issue was discussed in detail in a joint paper with Dr Surjit S Bhalla that can be accessed by clicking here.

With the announcement of the Pradhan Mantri Kisan program and its subsequent extension, we do have the necessary framework in place for such a program, thanks to years of work on the Aadhar-based Jan Dhan Aadhar Mobile (JAM) trinity and the Direct Benefit Transfer (DBT) framework.

Such a program is very likely to be revenue-neutral in the long-run and it could be revenue-neutral even in the short-run if one includes MGNREGA (Mahatma Gandhi National Rural Employment Guarantee Act) into the programs that it would replace.

Therefore, it doesn’t necessarily qualify as an expansion in that sense of the word – and without a replacement, we simply can’t afford such a program. A temporary cash transfer program is not so temporary, as we find India’s tendency to make even the temporary a normal and hence, permanent for seven decades (Article 370)!

On the choice between personal and corporate tax cut at the current juncture, one must appreciate the fact that Indian corporates have one of the lowest retained earnings and they’ve been extremely leveraged.

The low levels of retained earnings necessitated them to seek debt for meeting their investment requirements and growth aspirations. The problem in the current economic slowdown originated primarily from the financial sector and we’ve discussed the twin balance sheet problem for a while now.

Perhaps, if the corporate tax cut would have come three or four years ago, a lot of these problems would have disappeared. Similarly, if MPC (Monetary Policy Committee) would not have increased interest rates in 2018 twice, the current slowdown wouldn’t have happened.

There were definite mistakes that were made in the past – the only difference is that the Finance Ministry recognizes them and is ensuring that it does the necessary course correction.

A personal tax cut may have induced temporary demand but it wouldn’t have been enough to deal with the financial sector stress. In contrast, a corporate tax cut addresses the balance sheet of both the corporate sector and financial firms such as banks and NBFCs (Non-banking Financial Sectors).

In fact, banks and NBFCs benefit the most from the stable lower rate of corporate taxes without the exemptions and most of them are likely to adopt the same.

This would, over a period, imply healthy retained earnings, which will take care of the remaining stress in the system – but of course, we must take out whatever stress exists now through Asset Reconstruction Companies (ARCs).

The tax cut to corporates will in many ways ensure that the system remains afloat and collateral damage in the current slowdown is minimized. Moreover, it is a move that is long-term in nature as it focuses on making India one of the most attractive business (and manufacturing) destinations of the world.

Now India has an attractive tax rate and a vast market along with massive investments in physical infrastructure; so once the financial sector is healthy, we may be looking at a sustained potential growth rate of 7.5-8 per cent.