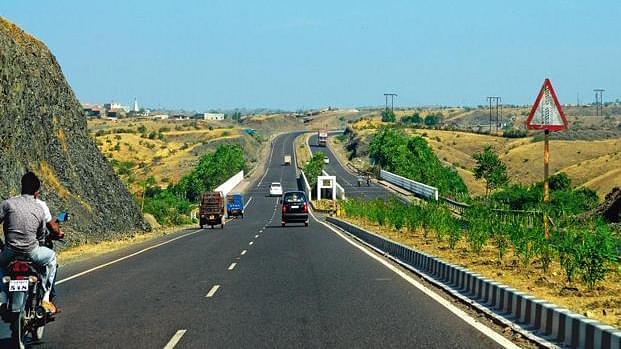 The largest ever outlay for road construction comes in the backdrop of the NDA implementing GST which aims to create a common market by dismantling inter-state tariff barriers.  (Ramesh Pathania/Mint)

India on Tuesday announced an outlay of Rs 6.92 trillion for building an 83,677 kilometre (km) road network over the next five years.

The largest ever outlay for road construction comes in the backdrop of the National Democratic Alliance (NDA) government implementing the goods and services tax (GST) which aims to create a common market by dismantling inter-state tariff barriers.

A robust road infrastructure will help in that direction.

“In order to further optimise the efficiency of movement of goods and people across the country, the government is launching a new umbrella program,” the government said in a statement.

Mint reported on the government’s plan to kick off India’s most ambitious roads programme ever on 19 April.

The road construction push includes the Bharatmala Pariyojana with a Rs 5.35 trillion investment to construct 34,800 km of roads. In addition, Rs 1.57 trillion will be spent on the construction of 48,877 km of roads by the state-run National Highway Authority of India (NHAI) and the ministry of road transport and highways.

“The huge spending on infrastructure announced today will give a fillip to private sector investment,” finance minister Arun Jaitley said in a press conference.

To expedite the Bharatmala projects, apart from the Ministry of Road Transport and Highways and state-run firms—NHAI and National Highways and Infrastructure Development Corporation Ltd (NHIDCL)—even respective state public works departments (PWDs) will be roped in for timely execution. This, in turn, will generate 142 million man-days of jobs, the government said.

To give a boost to the ambitious plan, all future road projects such as economic corridors and coastal roads have been brought under its aegis. The other projects under the marquee scheme include roads providing international connectivity, border roads, roads connecting economically important nodes, green field expressways and the remaining National Highways Development Project (NHDP) works under the scheme launched in 1998 by then prime minister Atal Bihari Vajpayee.

“With the implementation of this programme, India could get the much-needed cost competitiveness in the manufacturing sector by bringing down the logistics cost which is currently one of the highest among the emerging markets and way above that prevalent in developed economies,” said Jagannarayan Padmanabhan, director and practice lead, transport and logistics at CRISIL Infrastructure Advisory.

To fund the marquee Bharatmala scheme, Rs 2.09 trillion will be raised as debt from the market, while Rs 1.06 trillion in private investments is being targeted through public, private partnerships. In addition, Rs 2.19 trillion will be provided from Central Road Fund (CRF), Toll-Operate-Maintain-Transfer (TOT) projects and toll collections of NHAI.

The government is working on raising capital by monetizing the operational road assets of NHAI that have been built by public funding, a first in the country. The government expects a private investment potential of Rs 34,000 crore from the monetisation of these 82 operating highways under the TOT model.

“The 1st bundle of 9 NH (national highway) stretches of 680.64 km has been put out to tender by NHAI with potential monetisation value of Rs 6258 crore,” the statement added.

Prime Minister Narendra Modi has said projects such as Sagarmala and Bharatmala will prepare a strong base for infrastructure development, enabling a person to travel across the country on a single road.