Can India Gain From US Ban On Xinjiang Cotton Imports? Here's What The Textile Industry Says 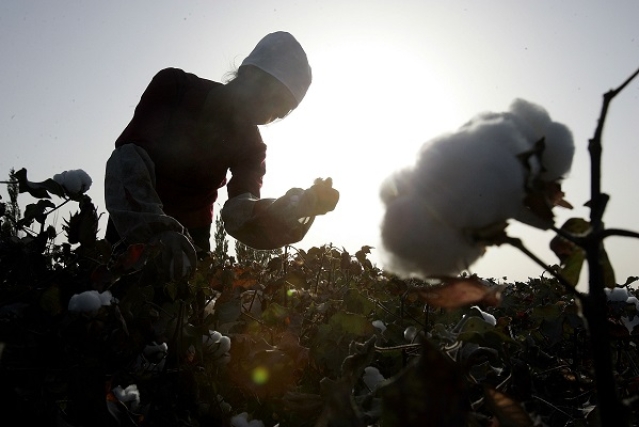 A man plucks cotton at a farm in Xinjiang, China.

The Indian textile industry is looking to tap the opportunity arising out of the US ban on cotton imports from a Chinese quasi-military organisation, which is allegedly using forced labour of Uighur Muslims.

Two weeks ago, the US Customs and Border Protection (CBP) agency came up with a “Withhold Release Order” banning cotton and cotton products from the Xinjiang Production and Construction Corp (XPCC), one of China’s largest producers.

The US doesn’t import cotton from China but buys a good quantity of cotton products from China. However, the CBP could now look at cotton textile products made from the banned cotton in countries such as Vietnam, Bangladesh and the Philippines.

The CBP action is part of several decisions the Donald Trump administration has taken in the last few weeks as it heads to demit office in the third week of January. These decisions could make things difficult for incumbent president Joe Biden.

Trump’s actions include banning access to US technology and investments for major Chinese companies, mainly State-owned ones.

However, Biden has pledged to work with the allies of the US to put pressure on China to curb human rights and trade abuses.

XPCC accounts for 30 per cent of Chinese cotton. The US ban will force garment makers and apparel manufacturers to ensure that their products do not contain the fibre from XPCC farms.

The Xinjiang Uighur Region in China accounts for 86 per cent of total cotton produced in China. It makes up 70 per cent of all cotton spun into yarn and enjoys the largest share in China’s yarn export basket.

Nearly 75 per cent of fabric exports from China are likely to have been made from Xinjiang cotton.

There are a few problems that the global textile industry could face in view of the US CBP order.

Countries such as Bangladesh, Vietnam and the Philippines use Chinese cotton for their products and there is no guarantee that the raw material has not emanated from the controversial province.

The “Withhold Release Order” allows the border police to detain shipments if it suspects forced-labour is involved in making the products.

There was further damage to the Chinese cause as yesterday (15 December) media reported that China was allegedly forcing hundreds of thousands of Uighurs to pick cotton in Xinjiang province farms.

Other minorities were also being pushed into forced manual labour by the Chinese authorities, the reports said.

According to available data, China enjoys a 24 per cent share in the US textile fabrics market, 40 per cent yarn market and 36 per cent share in clothing. Compared to this, India’s share, respectively, is 9.42 per cent, 13.83 per cent and 4.38 per cent.

In 2018, China made up nearly 35 per cent of textile and clothing imports by the US compared with India’s share of 7.11 per cent.

The question now in the industry is can India benefit from the US ban on XPCC and how much ground it can make in bridging the gap of nearly $35 billion in the American market.

The textiles industry is sure that it can gain, but it is not sure how much it would actually translate into as benefits.

According to K Selvaraj, Secretary-General, Southern India Mills Association (SIMA), the global market has been looking at alternatives to China soon after the Coronavirus (COVID-19) pandemic began spreading across the globe.

“India is the second-largest textile producer and has ample opportunities. However, it has been lagging behind because of issues with regard to manmade fibres. Our raw material prices were expensive. We have now got a level-playing field in manmade fibres, except fibres such as viscose,” said Selvaraju.

The two schemes, likely to be announced by the Union government soon, are mega industrial parks and the establishment of a National Textile Fund (NTF).

“The NTF will allow the government to infuse Rs 35,000 equity fund at a lower interest or longer credit period. Currently, banks provide loans for a period of seven years, whereas it takes nine-10 years for a textile firm to pay back. This is because sometimes, recession sets in given the textile industry circle and projects could also be delayed,” he said.

The NTF was expected to be a rational one, though it could take time for the government to announce it, the SIMA official said.

However, Selvaraj agreed that China’s problems in the US market offered to “throw a lot of opportunities” and a pact with Bangladesh, which is on cards, could also prove to be a win-win factor.

Tiruppur Exporters Association Executive Secretary K Sakthivel said that India could be up for competition from Vietnam, from where US sources a lot of its textiles needs.

“US buys a lot from Bangladesh and Indonesia too. But our industry people are getting enquiries from the US and we have to see how far we can gain,” he said.

Also, India’s position will be determined by Biden’s approach to the Chinese issue.

The other problem, Sakthivel said, was that Chinese share in the US market had dropped by some seven per cent since 2013, but India gained only a meagre 0.5 per cent from it. “Vietnam and Bangladesh walked away with 6.5 per cent of this share,” he said.

Selvaraju said that cotton made up only 20 per cent of textiles and clothing exports with manmade fibres making up the rest.

“Also, cotton is available only for five months here, which makes us competitive for 7-8 months only in a year. We have sought a price stabilisation fund that will benefit cotton farmers. It will ensure year-long supply,” the SIMA official said.

TEA’s Sakthivel said that the current surge in cotton prices is a cause for concern but a more important issue was labour shortage in places such as Tiruppur.

“At least 30 per cent of the labour who had gone home during Coronavirus have not returned. The rate of attrition in Tiruppur is high and there is no guarantee that they will return,” he said.

However, rating agencies such as ICRA say that Indian domestic textiles industry will gain from the US-China spat, particularly since Xinjiang is a major cotton-growing province.

Another rating agency, Ind-Ra, has said that Indian textiles industry has begun pushing more of its products in the US market and it would stand to gain much in the terry towel and bed linens segment.

Experts said that the US ban could now result in more demand for raw cotton from India, particularly from Vietnam and Bangladesh.

Currently, both these countries are buying a good amount of cotton from India, which is expected to export at least 50 lakh bales (170 kg) cotton this season to September 2021.