Data Lies: The Foolishness Of Claiming UPA-2 Growth Was Better Than NDA-2 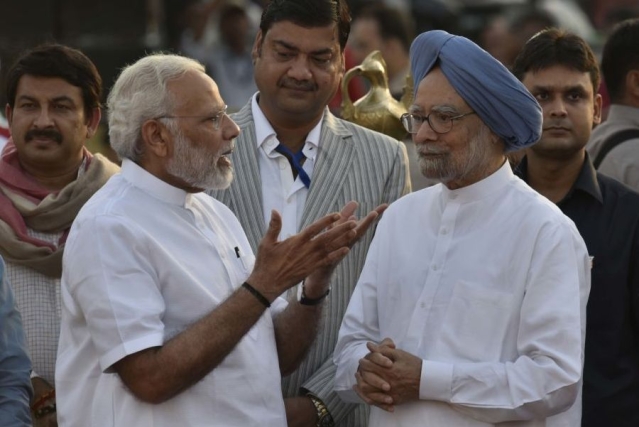 A frequent charge made by some public commentators and opposition politicians is that India’s current gross domestic product (GDP) numbers do not reflect the true reality of the Indian economy. Questions on the quality of Indian data have been raised ever since the government updated its methodology for the computation of GDP.

These changes intended were to ensure that the Indian system of national accounts is in line with the United Nations System of Accounts (2008). The new data has been vetted by statistical experts at international agencies such as the United Nations, International Monetary Fund and World Bank, and so the accuracy of the data cannot be a legitimate concern.

However, several experts have repeatedly questioned these numbers and have argued that they have been overtly inflated while United Progressive Alliance (UPA) era growth has been reduced deliberately by the political leadership. Unfortunately, there is little evidence to back this claim, as it is well known that growth collapsed after 2011-12, and the later years of UPA-2 witnessed significantly high inflation combined with a slowing economy.

A part of the criticism of the new growth numbers is the result of a genuine debate over the deflator used to arrive at the real GDP estimates. The process of GDP estimation is such that we first work out the money value of all goods and services produced in the economy and this is then deflated to arrive at the real value of GDP. This is done to ensure that there is no price effect in its estimation. There is a genuine debate around the choice of the deflator, but somehow the discussion on estimates of growth has revolved around the politics rather than the technical aspects associated with it.

There are enough reasons to believe that the back series released by the Central Statistical Office is genuinely robust. For starters, the previous series suggested that the global financial crisis that started in September 2008 had a limited impact on the Indian economy. This is highly unlikely given the extent of integration of India into global markets (especially financial markets).

Consequentially, several authors argued that India had decoupled its economy, or had at least insulated it from external vulnerabilities. It is worth noting that after the September 2008 crisis, the Indian government rapidly increased its fiscal expenditure. This resulted in a temporary revival in growth rates, which was further aided by aggressive lending by banks. This resulted in a build-up of additional capacities in the industrial sector. It is well understood that when there is spare capacity, firms don’t invest. This is precisely what happened post-2011 as capacity utilisation fell and there was an increase in excess capacity (source for the data: RBI). Therefore, there is enough macroeconomic evidence to suggest that the new GDP series is accurate and a significant improvement over the previous GDP series.

Despite this, a recent article in Mint newspaper suggests that growth rate under UPA-2 was somehow more robust compared to growth rate in National Democratic Alliance (NDA)-2. This assertion has been made on the basis of some cherry-picked statistics and a lot of people may end up even believing the article. The reason behind picking statistics other than GDP was because the author assumed that the current GDP is not the best estimator of economic growth in India, but as we have suggested above, this assumption is fundamentally flawed. So, the very premise of looking at other statistics can be questioned.

But there are multiple issues with the article, which we will carefully evaluate.

At the onset, we must state that it is preposterous to suggest that growth under UPA-2 was more robust than under NDA. We have enough evidence about the fragile nature of growth under UPA, now that we have also experienced the costs of such growth in terms of high inflation, and the resultant slowdown post-2011. Growth during the early days of UPA-2 was fuelled by a high fiscal deficit combined with excessive lending by banks - a deadly cocktail, as once the economy slowed down, the bad loans problem escalated, restricting credit availability in the economy. The slowdown put enormous pressure on government’s revenue realisation.

The indicators taken to reflect the growth rate are too prohibitive or restrictive in many ways. For instance, let us look at domestic two-wheeler sales or car sales. The comparison for both these variables is done on a five-year period scale. This is problematic because the author himself points out that a major jump in car sales came in 2009-10 and 2010-11, and averages can be sensitive to outliers. The growth rate till 2011 was high and it collapsed only after 2011, so the comparison should have been on a year-on-year basis.

If in 2014 the economy was slowing, then it would not magically revive within a year. This is an important factor for sticky variables such as investment or even the profit cycle. The choice of variables to evaluate GDP growth has ignored these factors.

The article also mentions low retail loan growth during the period, but that again goes back to the point that a five-year to five-year average comparison makes little statistical sense. UPA-2’s excessive lending led to a significant build-up of stressed assets in the banking system. Consequentially, banks didn’t have the capacity to lend for a major part of the early NDA years. It is only after adequate provisioning and the implementation of the Insolvency and Bankruptcy Code that the resolution of non-performing assets (NPAs) began and banks were able to de-stress their balance-sheets.

The low retail loan growth was thus due to supply-side bottlenecks and it cannot be taken as a proxy for lack of demand for retail loans.

The cement industry too faced similar problems as the real estate sector boomed due to easy credit between 2006-2010. But as the economy slowed down, builders accumulated inventories and the sector went into a tailspin by 2013.

A lot of this has been resolved by bringing in RERA (Real Estate Regulation Act) and formulating better trust between potential home owners and builders. Low inflation rates post-2014 have also brought down nominal interest rates, so the cost of owning a home is going down. The last few years of NDA have been good for the real estate sector, especially in the affordable housing segment, so once again the comparison should be on a year-on-year basis rather than on five-year averages.

Another problematic suggestion made by the author, Vivek Kaul, is about the low income tax growth rate. The problem with his assertion is that tax collection is a nominal variable and India experienced moderate inflation over the last couple of years. The comparison should thus be on buoyancy across a period rather than just looking at the five-year average growth rates. (A related article on tax compliance can be read by clicking here.)

There are multiple sectors in an economy and not all sectors are likely to grow at the same pace. There is also the base effect that must be considered while evaluating such growth. In many ways, it is important to take a comprehensive picture of growth, but the variables picked have been of sectors that we all know were struggling during the early part of NDA-2 due to the bad economic policies of UPA-2.

India’s recent growth has been driven by investments in physical infrastructure combined with the rise of the digital economy over the last five years. It is a combination of these two factors that has driven economic growth during a period when India’s conventional industries were resolving their sector-specific bottlenecks. Most of these sectors have bounced back over the last two years and this must be reflected in any analysis of these sectors.

The attempt in the article was to use a statistically flawed methodology to draw a convenient, yet inconsistent, conclusion. The conclusion should be taken with a pinch of salt given that it appears to be an attempt at deliberately making the UPA-2 period look good when in reality the economy was under severe duress due to the government’s incoherent and absurd economic policies.