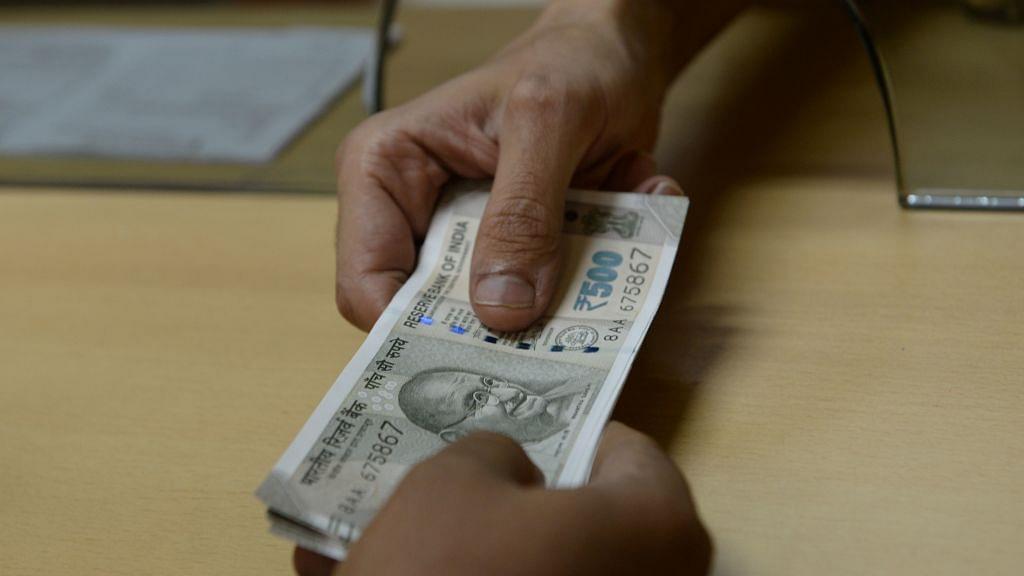 A bank staff member hands Indian 500 rupee notes to a customer on November 24, 2016, in the wake of the demonetisation of old 500 and 1000 rupee notes in Mumbai. (INDRANIL MUKHERJEE/AFP/Getty Images)

One of the big benefits of demonetisation was that it served as the final shove to Indians to go and put their hard earned money into financial products rather than physical assets. Demonetisation did what incentives, advertisements, enticements of higher returns over decades couldn’t do.

Data from the Reserve Bank of India (RBI) shows that gross financial savings rose to 11.8 per cent of the gross national disposable income (GNDI) in fiscal year 2017, a notable climb of 90 basis points from 10.9 per cent in the previous year.

Not surprisingly, the improvement into financial savings was led mainly by bank deposits. After all, Indians were given 50 days to deposit their invalid cash into their bank accounts. And that is exactly what the people were preoccupied with during the demonetisation months.

So, savings into bank deposits surged 7.3 per cent of GNDI in fiscal year 2017 from 4.8 per cent in fiscal 2016. Other products also caught a slice or two of financial savings.

Indians invested 1.2 per cent of their disposable income into shares and bonds, a massive improvement from the average 0.2 per cent in the years before. A look at how stock indices have soared since demonetisation should be enough to add a sense of certainty to this. The inflows into equity mutual fund schemes are another indicator of how the stock market gained from getting a bigger slice of household savings. The insurance sector also benefited with 2.9 per cent of disposable income flowing into it.

True, savings deployed into physical assets have fallen but to shrug off a behaviour passed down through generations is difficult. There is no doubt demonetisation caused a sea change into how people invest. But like always, the bigger question is will this sustain?

The RBI has made good the loss of 86 per cent of cash by rapid remonetisation and that too with a higher denomination note of Rs 2,000. Whether Indians revert to their tried and tested investments in gold and real estate or whether they will retain and increase the proportion of their savings in financial assets will be revealed only in the years to come.