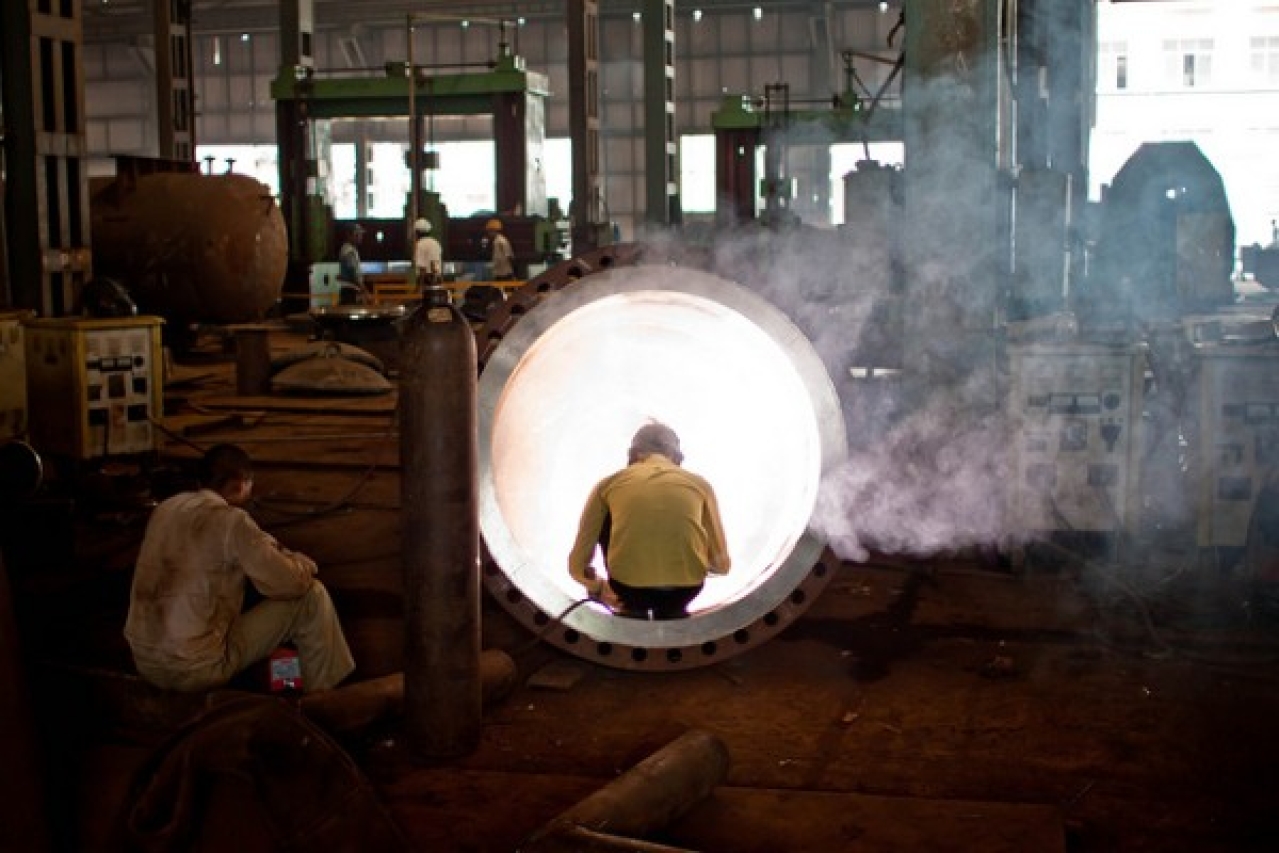 A welder in an Indian steel factory (Jay Hariani/Flickr)

The first-quarter gross domestic product (GDP) growth figure of 8.2 per cent, released on Friday (31 August), is like a refreshing shower for the Bharatiya Janata Party (BJP)-led government of Narendra Modi. Though the numbers would possibly moderate in the second half of the year, they would still be tantalisingly close to the 8 per cent mark.

Coming in a pre-election year, will these numbers help the government as a gust of favourable wind? Does a higher output create a feel-good factor for the people to favour the party in power? Clearly, a lot depends on the nature of the growth. Here the government is on better wicket this time. Of the broadly eight constituents of gross value add (GVA) in the economy (i.e., netting out government subsidies), there has been a rise in four, all of which – manufacturing, construction, agriculture, and electricity and other utility services – measure economic activity in the private sector rather than that of the government. There is a 13.5 per cent surge in manufacturing sector growth, and an 8.7 per cent in construction plus a 5 per cent growth in agriculture. The laggard is the services sector, which has not bounced back well, but, of course, that has happened on a higher base.

In fiscal years 2018 and 2017, the ballast in the GDP was government investment. The rise in the non-government sector this time around is, therefore, an indication that broad-based economic activity has returned to the economy. The marginal slowdown later in the year will not distract from this trend. It clearly shows that the economy has ridden the impact of GST, demonetisation, and insolvency regulations well. These measures were necessary to put the growth rate of the economy on a durable path and, as these numbers show, it has begun to happen impressively.

The corroborative evidence of a larger growth impetus is also reflected in the rise in private consumption spending. From 6.7 per cent in the last quarter of fiscal year 2018, it has risen to 8.6 per cent in this quarter – the highest in six quarters, as a CRISIL note points out.

So, how does this hold up for the party in power? GDP growth definitely cuts poverty, but it comes with a lag effect. The BJP government has averaged a 7.3 per cent in its first four years, a tad more than the 7.2 per cent in the first four years of the United Progressive Alliance-2. So, this year’s data, just slightly more, will not change the statistics much. It also means, however, that despite cries of dipping growth, there is no such evidence from the statistics that Indians are worse off than before.

But does that translate to a positive surprise? This is where it gets tricky. See this paper on United States election trends and GDP or this International Monetary Fund paper. They show that governments often time expenses with election cycles, but to its credit, this government has not walked that path yet.

Of immediate concern is the data that shows the rise in agriculture sector hides some key problems. While the nominal non-agriculture GVA has expanded to 14 per cent in the first quarter of fiscal year 2019, yet during the same period, the nominal agro GVA has declined from 10.9 per cent to 7 per cent. This means the pricing power of farmers has not returned. This is the reason for some of the agitations that have become strident of late. Those are essentially a demand to build up more opportunities from a rising economy. Yet, unlike what the Congress party would have you believe, there is no significant loss of jobs, so people are not coming up short. Instead, segments of the new entrants to the humungous labour force are not able to see adequate opportunities in the current rate of growth of the economy.

Again, however, this does not translate to negative votes. If the first time-voters are convinced that Narendra Modi has a better blueprint to offer, as, for instance, he successfully conveyed in 2014, he will succeed.

There is an interesting piece of statistic to mull over in the GDP data. Trade growth has likely improved, as proxied by the rising GST collections. It is buttressed by an impressive growth in sales of commercial vehicles at 51 per cent. Trade is an entrepreneurial sector and an employment-boosting one, and answers the rising demand from the young labour force.