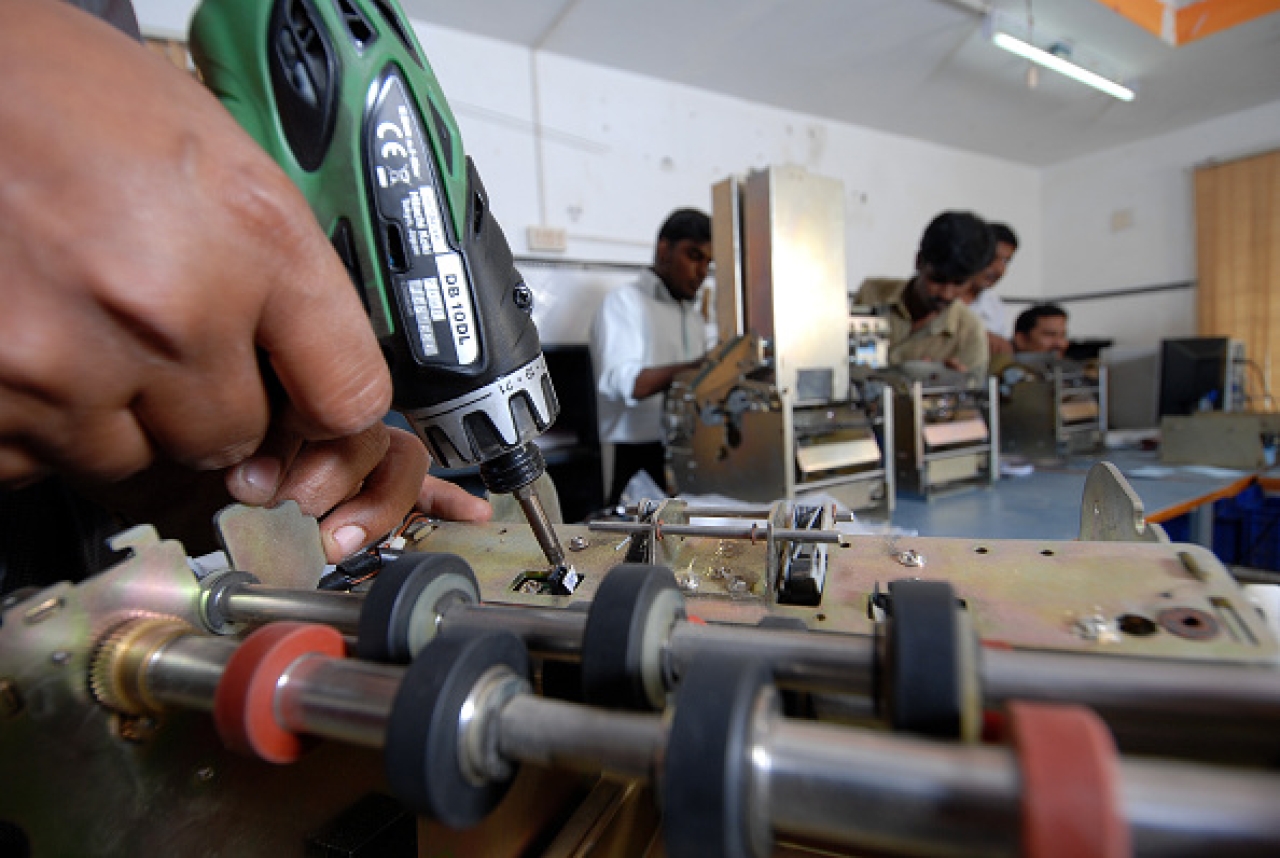 Inside view of the office of Vortex Engineering in Chennai. (Hemant Mishra/Mint via GettyImages)

The emphasis of this government has been on better delivery of social benefits to the people and improving systemic efficiencies. This includes digitisation of the benefit delivery and transactions, plugging leaks and wastes, cutting out the inefficiencies in running of the core services like power, railways, and the creation of new infrastructure like roads, rural electrification, housing etc. Things that have a positive impact on people’s lives.

These are certainly commendable objectives and the performance so far has been pretty good.

But the government needs money, a lot of it, to carry these objectives forward. So far, the response to this has been around eliminating bottlenecks in FDI, plugging revenue leaks etc. These are good short-term measures, with many derived benefits to the economy over the longer run. But they are unlikely to give large enough gains for the future needs. This can only be bridged by much higher growth. It is here that the government needs to focus on micro-economic factors impacting the growth of small and mid-sized businesses.

In Germany, for example, virtually all businesses are small to medium-sized  –  more than 99 per cent. Numbering more than 3.6 million companies and providing more than 60 per cent of all jobs in Germany, the “German Mittelstand” (mid sized companies) contributes almost 52 per cent of total economic output. (The result of a very supportive government policy and support framework.)

All of this, underlines how critical SMEs are for achieving higher investment, growth and jobs. But clearly, there is a problem of growth and productivity here.

Low Growth And Productivity, Not Under Reporting Is The Core Problem

The GDP contribution numbers and the tax contributions from this sector are a strong indicator that this segment is not as vibrant as it should be.

It would be wrong to construe this as an indicator that this sector is full of unscrupulous elements, and therefore, must be dragged into the tax net by plugging the under reporting of their incomes.

The truth is, most businesses struggle to grow in the hostile Indian business environment, and then stagnate as restrictive forces impinge on their growth. Most Indian businesses work on extremely thin margins, with one year margins/profits or just cash flows, becoming the input into the next year's growth. Squeezing out taxes from them when they still have small revenues, and especially cash, in the form of advance taxes, constraints their ability to reinvest in growth.

But even if we do assume for a moment that these businesses are under reporting and most of them are crooks and therefore paying very little by way of direct taxes, the fact of the matter is that they are still generating a lot of economic activities and therefore corresponding indirect taxes. The new goods and services tax (GST) system helps plug the leakages and under reporting.

Not Doing Well When It Comes To Making Things

Take two other numbers that should concern the government. One, more than 50 per cent of the MSMEs are into retail and trading, with less that 25 per cent of them involved in making things (manufacturing). Second, we now have a trade deficit of nearly $52 billion with China.

The numbers are a strong indicator that we are not doing well when it comes to making things. Small businesses, especially ones in manufacturing, are struggling to grow for many reasons and need help. A large part of the blame has to fall on the broken ecosystem, the result of a history of short sighted government policies and inadequate support for this sector. A vibrant start-up-MSME sector is not just important to economic growth, it is strategic to our future as a country.

Good Beginning But Much More Is Needed

Announcing the Union Budget for 2017, Finance Minister Arun Jaitley said MSMEs having revenues less than Rs 50 crore (approx $8 million) have been given a cut in corporate tax rate to 25 per cent from 30 per cent, earlier. Also, for businesses that have turnover of up to Rs 2 crore, it was earlier presumed that eight per cent of it was income, or profit, for tax purposes. This was brought down to six per cent if gross receipts are received through digital means.

This make sense because it can have a larger impact without denting the government's coffer much. The reason being, this sector accounts for only 20 per cent of the total tax collection through corporate tax, though it accounts for 96 per cent of the total registered companies. The annual revenue lost estimated due to this measure is estimated at Rs 7,200 crore (approx $1.2 billion).

Spelling out the rationale behind the move to reduce the tax rate on MSMEs, the Finance Minister said: “medium and small enterprises occupy bulk of economic activities and are also instrumental in providing maximum employment to people. However, since they do not get many exemptions, they end up paying more taxes as compared to large companies. As per data of financial year 2015–16, 285,000 companies making profit of less than Rs 1 crore (about $200,000) paid effective tax rate of 30.26 per cent, while 298 companies making profit above Rs 500 crores (about $85 million) paid effective tax rate of 25.90 per cent.”

This is good but clearly not enough.

One measure the government could take to boost growth in this sector, is exempt payment of income tax up to, say, a turnover of Rs 500 crores ($40 million). That would make a lot of money available to these businesses to reinvest in growth and innovation.

And this won’t happen without precedence. The information technology (IT) services sector for years enjoyed tax free status and many local concessions to fuel its growth. The Indian IT industry is today estimated to reach $350 billion by 2020.

So why not for the SMEs? They are just as important to create future growth and world-class companies from India. If a case can be made for lower individual taxes to boost consumption, surely there is a case for tax exemptions to boost investments.

A back of the envelope calculation suggests this would mean the government foregoing Rs 90,593 crores (about $14 billion a year) which would work out to around 6 per cent of the total tax collection. Not much if it results in faster tax revenue growth in subsequent years and a more secure long-term future.

And even when the business pays no income tax, it is paying by way of indirect taxes and contributing to the economy in many other ways. A focussed policy to promote SMEs could give a big push to growth in this sector, adding both to government revenues and jobs growth.

Something the government should be happy with going into the next elections.

This article was first published in Medium and has been republished here with permission.

Tarun Malaviya is based in Pune and runs his own software firm.

Get Swarajya in your inbox everyday. Subscribe here.
Tags:
173 Shares