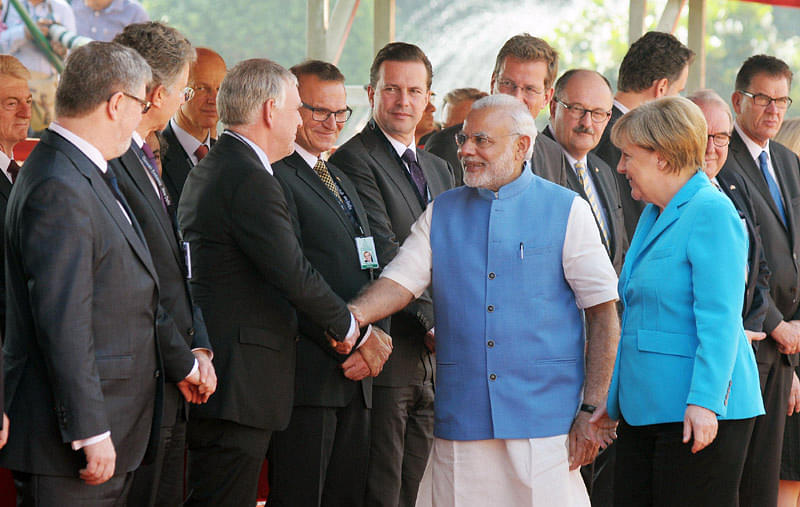 Recently on a visit to India along with the German Chancellor, Angela Merkel, the German business delegation clearly stated what India needs to do to attract and sustain German investment.

Germans are known to be outspoken. Some would even say, they are rude. But in this post-protestant country, people would rather consider themselves as honest. And that’s what you expect from a friend, they believe.

The large business delegation that German Chancellor Angela Merkel brought to India on the occasion of the third intergovernmental talks between the two countries on Monday and Tuesday therefore minced no words.

Blame it on the fact that celebrities like Juergen Fitschen, Co-CEO of Deutsche Bank, Joe Kaeser, CEO of Siemens and Thomas Enders, CEO of Airbus had to fly in a rather basic troup-transporter of the Federal German Army because the comfortable government airplane was down with technical problems in Berlin, the mood at the business summit held parallel to the government talks at the Taj Mansingh Hotel in Delhi brimmed with impatience.

“Prime Minister Modi has raised huge expectations with his ‘Make in India’ campaign earlier this year at the Hannover Messe in Germany”, says Wolfram von Fritsch, Chairperson of Deutsche Messe AG. “We all really believed that he is the man who can make a difference. But now, half a year down the line it seems that not much has happened to ease business in India”, Fritsch complains.

He was not the only one in the 30-head strong German business delegation, who brought forward their grievances in the meeting that was jointly organised by FICCI, CII, the Indo-German Chamber of Commerce (IGCC) and the Asia Pacific Committee of German Business.

While Amitabh Kant, Secretary for Industrial Policy and Promotion, emphasised that “the process of growth” in India has just begun, German CEOs rather seem to believe rating agencies such as Fitch, Moody’s and recently the Asian Development Bank (ADB) that cut down India’s growth forecast to 7.4 percent from 7.8 percent for this year.

For them, this is more than a statistic exercise. Many of the German companies that are already present in India, especially the car and machine building industry, pointed out that they already have over-capacities in India built up during the heydays of the UPA government. And they are afraid to get disappointed by the India story for a second time. Slower economic growth worldwide and a less bullish outlook on India led to a slow-down of the annual trade volume between the two countries. Instead of cracking the much awaited 20-billion Euro mark, it is staggering around 16 billion Euro this year.

This is all the more regrettable since Germany as one of the leading economies worldwide can play a major role in making Modi’s “Make in India”-campaign successful. During the last ten years, German companies have invested more than five billion Euro in India, while Indian companies invested four billion in Germany, conversely.

“The German industry has a good position in India”, says Hubert Lienhard, Chairman of the Asia-Pacific Committee of German Business and CEO of Voith, a family-owned mechanical engineering company. “At the moment my own company has 20 percent more capacity than we need in the country. I hope that we will meet again here in one year and all the plans of the Indian government have been transformed into action. Then we will continue to invest.”

The latest survey by the IGCC on hindrances of doing business in India in 2015 lists bureaucracy (58 percent), lack of infrastructure (52 percent) and corruption (45 percent) as the main obstacles for companies, followed by tax disputes (32 percent) and lack of skilled people (35 percent).

This and the experiences of German CEOs clearly suggests that the government urgently needs to come up with some credible initiatives that will convince companies that India is serious about fighting corruption and creating legal security. Two issues that not only cost many companies dearly, but also stall projects that would be in the interest of both sides.

Wolfram von Fritsch of the Deutsche Messe AG admits that he is already checking on other countries such as Indonesia because a major project that he had planned near Delhi seems to be going nowhere. “If nothing happens in the next four to five months, we will have to invest elsewhere.”

Thomas Enders, CEO of Airbus, points out that “a lot needs to be done in public and defence procurement in India”. Although he admits that “German export controls in defence are a weakness on our side, too”, he says that Requests for Proposals and Tenders (RFP) in India are often being “cancelled for dubious reasons” after companies had invested huge amounts of work and money in order to bring their concepts forward.

In this regard, Amitabh Kant had good news: He announced that a new defence procurement policy will be introduced next month. The business delegation also welcomed the announcement of a Fast-Track system for German companies in India, a privilege that was granted so far only to Japan.

A new initiative on skill development and vocational training was also inked by the two governments, although there have been previous attempts with the German dual system of vocational training and mixed results. Arun Bharat Ram, Chairman of SRF and the CII Education Council, noticed that “we have not yet convinced our companies of the benefits” that a modified version of it would bring for India.

It will be probably easier for the Indian government to walk the talk in the development of infrastructure, another area where German CEOs see a huge bottleneck especially with regard to the ambitious plans for smart cities and the so called industry 4.0, the fourth Industrial revolution. But it will have to come up soon with some flagship success to address the concerns of German and other foreign investors.

“Without infrastructure we will leapfrog nowhere”, says Catharina Claas-Muehlhaeuser, who heads the Board of Directors at Claas, one of the world leading producers of agricultural machines. “Everywhere in the world you have to develop energy and infrastructure first, then comes industry”, says Siemens CEO Joe Kaeser, who is particularly interested in the topic.

Siemens has been in India for almost 100 years and Kaeser had travelled to India five times this year because his company wants to sell technology for smart cities on a large scale. “Making one single project work is better than any talk”, says Kaeser. “Opportunities are huge in India and we have to make it work”. The Indian Prime Minister could not have formulated it better.

This piece was first published by the Observer Research Foundation (ORF), here, on October 6, 2015 and has been republished here with permission. ORF is a leading policy think-tank based in New Delhi.

Britta Petersen is a Senior Fellow at the Observer Research Foundation in New Delhi.
Get Swarajya in your inbox everyday. Subscribe here.
Tags: