How China Built $150 Billion Lead Over India In Textile Exports 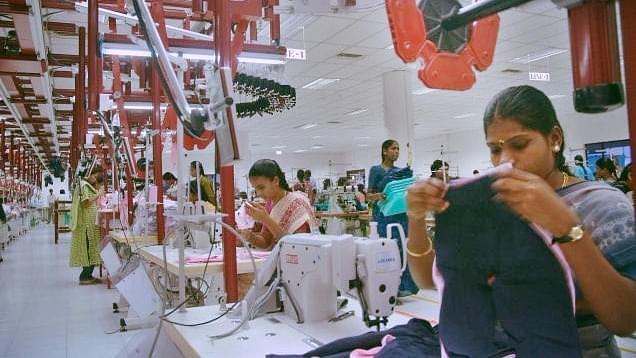 Workers at an apparel unit. India has been left behind by countries like Bangladesh and Vietnam in the apparel sector.

During that time, China’s textile and apparel exports rose from $50 billion to nearly $200 billion. In the global market, China enjoys a 40 per cent market share and India is a distant second with a meagre 5 per cent share.

How has China managed to become the leader in the global textile and apparel market?

China treated the textile sector as a priority industry, while Indian textile industry has had to compete with its hands tied to its back, facing various problems. These problems have cropped up mainly from faulty government policies. We will come to that later.

In 1979, China began its open-door policy and kick-started economic reforms. It chose to restructure its textiles industry, identifying it as a priority. With over 100 years’ experience in textiles, China had the basic infrastructure for the industry in place. So, it only needed a sharp focus, which began by raising capacities in each segment of the sector. The textiles industry is a labour-intensive one, and China chose to exploit its low-cost human resources, what with a huge population looking for sources of income.

China came up with six priorities to promote the textile industry – giving it a favourable treatment from supply of raw materials, to power, modernisation, bank loans, foreign exchange, and import of advanced technology.

While taking these measures, China primarily targeted its production for the export market. It took advantage of a bilateral pact that it had signed with the United States (US) in 1980. This got Chinese textile products a good market and the testimony to this fact is that the agreement underwent modification four times, the latest in 1997. This helped China export nearly 50 per cent of its total domestic production at one point of time in the 2000s. The initiatives also gave China the advantages that a first-mover usually gets in any industry.

One of China’s key features in restructuring the textile industry was encouraging the private sector to set up new modern units. It changed the landscape of the industry forever. Next, this helped China to dismantle the old machinery and increase productivity.

According to the EU SME Centre – a European Union (EU) initiative to support small and medium-sized enterprises so they can do business in China, even when the world was going through tough economic conditions during 2008-11, China’s exports to the EU, US, and Japan increased.

China also chose a policy mix that suited its national interests. It opened up its textile industry to foreign direct investment (FDI) that helped the rapid expansion. Between 1979 and 1999, China received FDI worth $360 billion with 60 per cent of it going towards labour-intensive industries like textiles. It came up with lucrative offers to foreign investors and devalued its currency against the dollar, thus managing the foreign exchange market. In 1994, the yuan was devalued by 50 per cent, making Chinese products highly competitive in the global market.

China, as a result, garnered a major share in the global market when other countries suffered from the effects of the Mexican peso crisis.

India, in contrast, has always lagged behind. Currently, its situation is such that countries like Bangladesh and Vietnam have now left India behind, especially in the readymade garments shipments.

So what is ailing the Indian textile industry when it often looks to emulate the Chinese industry?

A few things in particular have always been hurting the Indian textile industry. First, Indian infrastructure, at least until a few years ago, was a hurdle the textiles industry had to overcome day and night. Next, until Indian farmers began growing genetically modified or Bt cotton, the cotton-based textile industry faced a shortage of raw material. In 1994, spinning mills bled after the cotton crop failed and traders hoarded cotton. The third hurdle that the sector has been facing and had been complaining about at least until 2015, has been the hank yarn obligation. Since India has three million handlooms, the government has always been of the view that the sector should get a continuous yarn supply. Therefore, it is mandatory for a textile mill to ensure that 40 per cent of its production is in hank form. (This was 50 per cent until 2003, when it was reduced.)

The textile industry has been seeking some sort of relief from this obligation, but in vain. The handloom sector is a huge vote bank that political parties dare not touch. However, the textile industry’s argument is that most of the handlooms have given way to powerlooms and, therefore, a review of the law is necessary.

According to the Federation of Indian Chambers of Commerce and Industry (FICCI), successive governments have come up with various schemes to help the textile industry move forward. Currently, at least 10 schemes are active.

One of the major ills of the industry is the unorganised units that are smaller in size. In fabric manufacturing and processing, these units use secondhand machinery that is imported. Shuttle-less looms that help weave fine fabrics make up only two lakh of the nearly two million looms in the country – a clear indication of Indian inefficiency. Dismantled looms in China find their way into India and it is no surprise that Chinese machines make up nearly one-third of textile machinery imports into India.

Despite these disadvantages, the textile industry offers direct employment to 45 million people directly and another 20 million indirectly. It is the second-largest employment-generating industry after agriculture.

Other issues worrying the textile industry, according to FICCI, are higher capital costs, absence of fibre neutrality, poor technology, and a lack of access to credit. Capital costs are higher in India, as also power costs. Absence of fibre neutrality is affecting the availability of man-made fibres at competitive prices, while outdated technology of machines is another impeding factor. Access to credit has always been an issue since the industry in India has to pay a high interest rate, ranging from 11 per cent to 12.5 per cent, compared with 5-7 per cent in competing countries.

The Indian textile industry is also hurt by the absence of free-trade agreements with major markets like Europe. While lesser developed countries such as Bangladesh can export to Europe at zero duty, others like Pakistan enjoy an advantage under a general system of preference plus system. Indian imports to Europe attract 9.6 per cent duty.

If India has to compete on equal terms in the global market, it has to first increase productivity and efficiency. That can be achieved only if it encourages the setting up of more integrated textile units. While skilled manpower is the need of the hour for the sector, a technology upgrade should be given priority. The quality of products should improve and FDI should be made attractive. According to the Department of Industrial Policy and Promotion, foreign investment in the textile sector hardly touched 5 per cent of the total FDI inflows between 2000 and 2015.

Textiles took root in Asia since the Western nations couldn’t help the sector sustain. A similar scenario is now unfolding with China’s rate of growth declining in the last couple of years.

India’s growth can certainly improve and even outpace China’s. But all indications are that it is unlikely to overtake China in the near future. For that matter, China has now turned its attention to technical textiles.

India, too, has set up a technology mission under its “Make In India” programme. How far can India give the Chinese a fight is something that we will know only in the next decade or so.