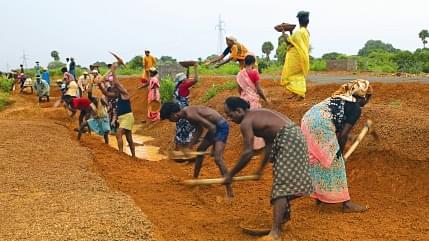 “I will ensure MGNREGA is never discontinued. After so many years of being in power, all you were able to deliver is for a poor man to dig ditches a few days a month,” he added. It was poor logic wrapped in bluster. Though the statement was meant as a mockery of the Congress for designing a poor scheme, it revealed instead the helplessness of the Prime Minister in repealing it. Last year, on the 10-year anniversary of NREGA, his government hailed its achievements of the past decade as “a cause of national pride and celebration".

It left many supporters of the Prime Minister and his party puzzled and disappointed. In this year’s budget, the government allocated Rs 48,000 crore - the highest ever amount in a single year to this scheme. It obviously looks like a u-turn on a major policy position by the Bharatiya Janata Party and the Prime Minister, which many supported because of his pragmatic views on socialist cash-sucking blackhole schemes like NREGA.

But the current National Democratic Alliance (NDA) government has made some major tweaks in the way NREGA is operated. Thus, the current version of the programme and that of the United Progressive Alliance (UPA) are based on totally different approaches. The former is aimed at asset creation and takes a target-driven approach. The latter operated on a demand-driven method where the focus was on job creation.

Centre For Social Development Director Ashok Pankaj, writing in the Economic and Political Weekly (EPW) journal, explains that the UPA prioritised jobs over asset creation by mandating wage-material expenditure ratio of 60:40 in schedule-1 of the act. The same schedule also mandated that four out of the eight works that the scheme covered were related to Kachcha work which needed more labour. The remaining four works which were related to asset creation were also labour intensive.

The NDA government added a proviso to schedule-1 stating that, “at least 60 per cent of the works to be taken up in a District in terms of cost, shall be for the creation of productive assets directly linked to agriculture and allied activities through development of land, water and trees.”

Pankaj accepts that the central premise of UPA’s NREGA - decentralised demand-driven job creation - failed to take off because job creation remained supply-driven. The other reasons he lists, include the failure of implementing agencies in strictly complying with the act or their problems such as manpower shortage, ineffectiveness of grievance-redressal mechanism and social audit.

The number of works under the scheme has gone up from eight to 23. Pankaj believes that targeted assets creation might increase centralisation of implementation which can be problematic because given the differences in local needs, it would be better and more useful if the decision to select works is taken at the gram sabha level.

If a top-down-approach is applied, as was the case in the 2016-17 budget, where the central government set a target of constructing 882,325 farm ponds and dug wells, 1,039,344 vermi compost pits, 3,299,344 individual household latrines, 63,531 anganwadi buildings, then it becomes a problem. But is this worry justified? The act already states that 50 per cent of the total works (in terms of cost) shall be implemented by gram panchayats that will select, plan and execute the work.

Another important change that the NDA government has ushered in is the addition of “individual assets” and infrastructure for the “National Rural Livelihoods Mission (NRLM)-compliant Self-Help Groups” in the assets list. This is significant given the potential positive effect it can have on the beneficiaries.

As Pankaj states, “providing one dug well to a family in the black soil Deccan area where cotton cultivation is popular has potentialities to change the status of the family from a casual labour household to that of a cultivator.” Those who could not afford to spend any capital on doing this from their own pockets, can now do so with the addition of “individual assets” under the scheme.

There are some concerns that it is only the agriculturalists who will benefit from this as the landless labourers who constitute majority of the NREGA workforce will lose out as they do not have any assets to develop in the first place. Some justify this step saying that given that the landowning farmers were the biggest losers from the NREGA scheme, it is only apt that they get compensated in some form. Additionally, we will know the real impact only after studying the creation of “individual assets” and its beneficiaries over a period of time.

Pankaj explains further that the NDA has made convergence the central motif of the scheme. Through macro-convergence, it has mandated that 60 per cent of the assets created (in terms of cost) shall be related to agriculture and allied activities. To ensure there is no duplication of works, and to encourage integrated planning, the government has tried to converge spending on NREGA and other schemes like Pradhan Mantri Gramin Awas Yojana or constructing anganwadis and so on.

One of the major problems with NREGA under the UPA, especially after 2011 when its implementation began slipping into paralysis, was that government bombarded implementing agencies with thousands of circulars averaging over hundred a year. Pankaj tells us that the NDA is in the process of consolidating over 1,039 circulars along with guidelines as a master circular-cum-programme guidelines. It is also clearing up pending works on a priority basis and have set deadlines for the same.

UPA’s act was far from perfect. In fact one wouldn’t be wrong to say that the primary aim of launching this scheme was to win a second term rather than create jobs. The UPA hastily extended the scheme to the whole of India when the initial plan was to do so over a five-year period. As so happens with all planning-related schemes, the government set up many objectives for this scheme, apart from creating jobs such as “strengthening democratic decentralisation through greater participation of people at local levels in the planning, reduction in distress migration, high participation of women and their empowerment” and so on.

The NDA has made some good improvements over the UPA’s version of the act but it may not suffice. An expenditure of Rs 50,000 crore is a significant amount which can be constructively spent on building tomorrow’s infrastructure, financing education for millions of poor students or providing healthcare facilities to poor people in remote villages. Whether it is a target-driven or a demand-driven approach , asset oriented or job oriented, there are better and financially prudent ways of achieving these objectives. Doling out money in such an ineffective way is not the way to go.

Currently, the NDA is short of numbers in the upper house and no big changes can be expected before the next general elections. One hopes that as soon as the magic number is touched, some substantiative reforms will be initiated.