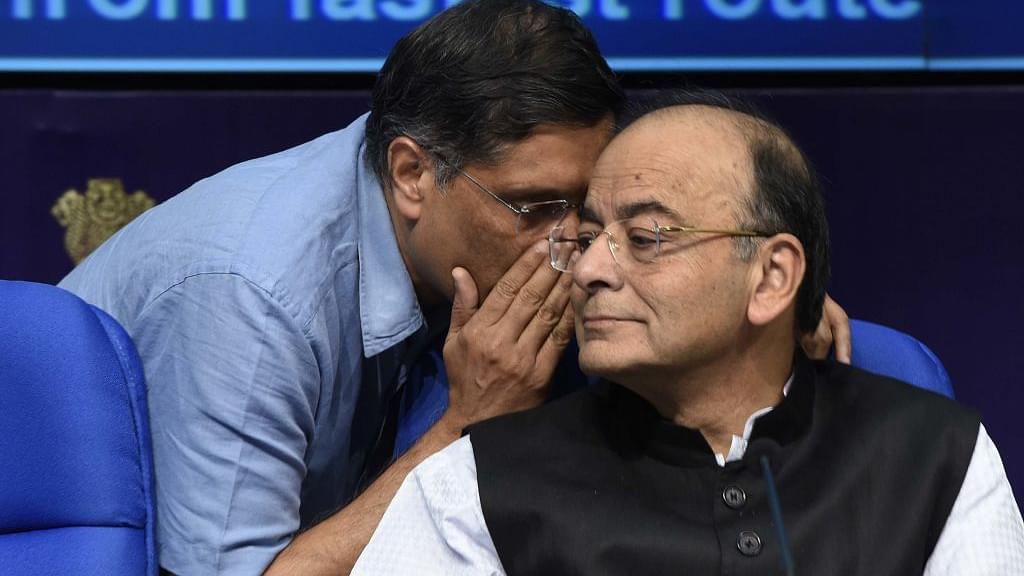 Union Finance Minister Arun Jaitley and Chief Economic Adviser (CEA) to the government of India Arvind Subramanian unveiled an ambitious Rs 2.11 lakh crore bank recapitalisation plan for public sector banks (PSBs) reeling under the problem of bad loans. Out of the stated amount, Rs 1.35 lakh crore will come from the sale of recapitalisation bonds that the government will soon issue, and the rest Rs 76,000 crore from budgetary allocation and markets.

The government had budgeted Rs 70,000 crore for recapitalisation until 2019. So far it has disbursed Rs 52,000 crore. That leaves its commitment to only Rs 18,000 crore to be infused in the next two years. In fact, the banks were expected to raise Rs 1.1 lakh crore from the markets under the Indradhanush plan but they could raise only Rs 21,000 crore so far. According to the new plan, banks will now have to raise an additional Rs 58,000 crore from markets.

The only new element thus is the announcement of “recapitalisation bonds” amounting to Rs 1.35 lakh crore which is a significant infusion.

How will it work?

The government hasn’t spelled out the details yet but put simply, it or one of its agencies will issue these bonds, which the banks can subscribe to and raise funds. Thanks to demonetisation, the banks are already flush with liquidity since deposits that came post 8 November have mostly stayed with banks. Hence, raising funds through “recapitalisation bonds” shouldn’t be an uphill task. Doing this would have two benefits, it will bring down the excess liquidity in the system and also help in recapitalising banks.

Here’s what the experts have to say about the government’s method to resolve lingering problem of bad loan.

Patel commended the government on behalf of the RBI, and said that the proposed recapitalisation package for the banking sector combined several desirable features.

First, by deploying recapitalisation bonds, it will front-load capital injections while staggering the attendant fiscal implications over a period of time. As such, the recapitalisation bonds will be liquidity neutral for the government except for the interest expense that will contribute to the annual fiscal deficit numbers. Second, it will involve participation of private shareholders of public sector banks by requiring that parts of the capital needs be met by market funding. Last, but not the least, it will allow for a calibrated approach whereby banks that have better addressed their balance-sheet issues and are in a position to use fresh capital injection for immediate credit creation can be given priority while others shape up to be in a similar position.

In an interview to Bloomberg Quint, Reddy said that bonds could be one way to recapitalise banks because there is no threat to the solvency of the banking system and capital has to be provided essentially to meet regulatory requirements.

In an interview to Bloomberg Quint, Khan said that "introducing recapitalisation bonds could be one of the best ways for non-performing asset resolution as it won't have any fiscal impact."

Chinoy said that this was a much-needed and bold announcement. He added that the improvement in capital adequacy from a front-loaded and meaningful commitment from the government should “(I) boost the resolution process under the bankruptcy law by increasing the willingness of public sector banks to accept realistic (and therefore potentially large) haircuts during the resolution process; (II) increase the propensity of banks to lend, and therefore boost credit and GDP growth prospects; and (III) generally boost confidence in the beleaguered banking sector, and allow banks to raise capital from markets.” However, he cautioned that devil was in details. “For example, pressure to lend to any one sector, in the aftermath of this recapitalisation, could interfere with allocative efficiency and lead to a further build-up of vulnerabilities down the line,” he added.

The State Bank of India’s ecoflash report termed this move by the centre as unleashing of big bang reform. It read:

Recapitalisation of PSBs through widely-discussed recapitalisation bonds has precedence not only in India but also in many other countries (Korea and Malaysia, for example). The obvious advantages of such bonds are that they do not alter the fiscal maths, as Government earned both dividends and market returns on bank shares. The Government need not raise immediate tax revenues and by borrowing directly from the banking system instead of the markets, the Centre can avoid crowding out private borrowings or distorting market yields.

The report reminded that this method of recapitalisation was used by the government in the 1990s too. Explaining the process followed at the time, the report said, “India had used this tool before in 1990s, wherein the Government recapitalised PSBs with the total amount upto Rs 20,000 crore by recapitalisation bonds. Government borrowed the amount from the banks and issued special non-marketable securities, however, later converted into marketable securities or perpetual bonds. The banks subscribed to these bonds in the normal course of their business.”

Krishnan wrote about this method last year and said that this could be used by the government just like it did during the 90s. Though, she rightly termed it financial engineering, she said that this can be considered in the interests of the economy “if transparently done.”

She listed various benefits of taking such a route:

One, the government need not raise immediate tax revenues to fund the mammoth bill on bank recapitalisation, which means less burden on the taxpayer.

Two, by borrowing directly from the banking system instead of the markets, the Centre can avoid crowding out private borrowings or distorting market yields. The fact that there is no such crowding out can justify keeping them out of fiscal deficit measurements too. (To make this effective, banks need to hold these bonds for the long-term and not liquidate them in the markets).

Three, as the Centre can borrow at far cheaper rates than the distressed banks, this would be an economical way to raise funds. From the banks’ point of view, subscribing to the recapitalisation bonds does not really strain their finances, because lending to the Centre is about the safest thing they can do with their loan funds. In any case, public sector banks tend to invest well in excess of their statutory liquidity ratio requirements in government securities.

Krishnan, however, sounded a cautionary note saying this method at best could be a short-term solution. “Measures like this will not do anything to address the structural rot in the banking system that has created the bad loan menace in the first place –  poor governance systems, badly judged lending decisions in good times, and the repeated white-washing of doubtful accounts in bad ones,” she had said.

One hopes that the government will follow this up with structural reforms in the public sector banks.