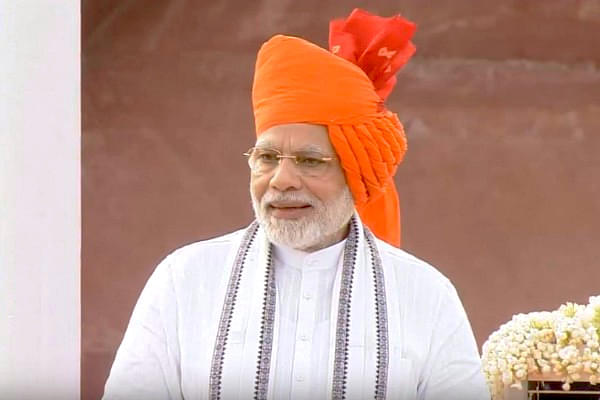 In his Independence Day address, Prime Minister Modi pointed out that his government had done something that no other government had had the courage to implement – 150 per cent of production cost as returns to farmers.

For a country that is suffering from a production glut in agri commodities like sugar, pulses, wheat, and rice, the centre is up with a solution – agri export policy.

For years now, we have been hearing about an agri export policy, but when the country has faced a shortage of any kind – like wheat and rice in 2006-08, the government has gone two steps back on its move.

Thanks to policies like the minimum support price (MSP), agricultural insurance, and promoting crops like pulses, India now has not only become a self-sufficient nation, but also an agricultural surplus one.

The problem for Indian farmers is that, globally, commodity prices have dropped in the last few years, especially foodgrains like wheat, rice, and corn (maize). The prices are lower because of higher carryover stocks rising from good production and a drop in crude oil prices.

In such a scenario, India has to look to exports of commodities to ensure that its farmers don’t end up getting prices that are lower that what they spend to cultivate one. In the budget for the current fiscal, Arun Jaitley announced that the centre will come up with a price formula that will ensure that farmers will get 150 per cent of the production costs as MSP. The MSP for crops was announced in right earnest this June.

In fact, Magsaysay award winner and architect of India’s green revolution, Dr M S Swaminathan, was among the first to laud the Narendra Modi government’s initiative to come up with an MSP that is at least 150 per cent of a farmer’s production cost.

“The National Commission on Farmers (headed by Swaminathan) submitted its report in 2006. Only now has the Government come forward to implement it,” he wrote in an article.

Prime Minister Modi, in his Independence Day address Wednesday (15 August), pointed out that his government had done something that no other government had had the courage to implement – 150 per cent of production cost as returns to farmers.

“The demand for higher MSP was pending for years. From farmers to political parties to agriculture experts, everyone was asking about it, but nothing happened,” he said.

When a government has come up with an announcement of MSP that will ensure 150 per cent returns on production cost, then it will also have to ensure that farmers’ produce are picked up without any problem. That is where the announcement of agri export policy comes in. In the last couple of years, farmers who grew pulses, especially arhar, groundnut, and cotton, have had to face problems of lower price. Sugarcane farmers, too, have been facing problems as sugar mills have been flooded with stocks.

The situation can be set right only if right policies are announced. For example, during the United Progressive Alliance government of Manmohan Singh, natural rubber growers suffered on account of low prices. The government then attempted to encourage rubber exports. But then, the country was ill-equipped and, more importantly, local prices were higher than global prices. Once rubber prices shot up on the rise in crude oil prices, the plans for export were just forgotten.

Similarly, sugar mills are facing a problem of plenty. They are burdened with stocks as farmers have been going for sugarcane in view of the high returns it provides. According to the Commission for Agricultural Costs and Production, sugarcane gives a gain of Rs 80 to a farmer for every Rs 100 he/she spends. It is one reason why the area and production of sugarcane are rising.

No doubt, the government has come up with policies such as encouraging the use of ethanol in fuel. Modi, in his Independence Day address, said ethanol production has trebled during his regime. Not just that, oil companies have been asked to buy ethanol and mix it with fuel.

Still, ethanol in itself won’t be able to solve the problems faced by sugarcane farmers. Dues to farmers are mounting and, by the end of this fiscal, they could run up to Rs 20,000 crore. The problem for the Modi government is that sugarcane farmers form a significant chunk of the vote bank in Uttar Pradesh, Maharashtra, and Karnataka. The government cannot be seen being idle in tackling the problem.

The centre has come up with funding storage of sugar stocks by the mills, but until and unless the commodity is exported, the companies could face a cash crunch. That, in turn, will lead to the mounting of the dues to farmers. Therefore, it is pertinent for the government to come up with a policy to help export sugar.

In the next few months, kharif crops will begin arriving. It is likely that there could be a glut in pulses or other crops such as maize.

In these circumstances, it will be wise on the part of the government to be prepared to tackle any emergent situation that could stir trouble among farmers. Already, the opposition is waiting for every opportunity to stoke trouble, especially among farmers. It is just not enough for the government to come up with an agri export policy. It will also have to look at promoting agri-related and value-added business. The government should also encourage farmers to take part in futures trading, especially options that are now available only in select metals.

Towards this, the Prime Minister has made the right noise from the Red Fort. He has talked about farmers’ welfare and solar farming. All this means that the government has taken note of not just the current situation, but the emerging one too.

The policy shouldn’t be short-sighted or forgotten once the glut situation is solved. It should be able to serve farmers’ interest for years to come.