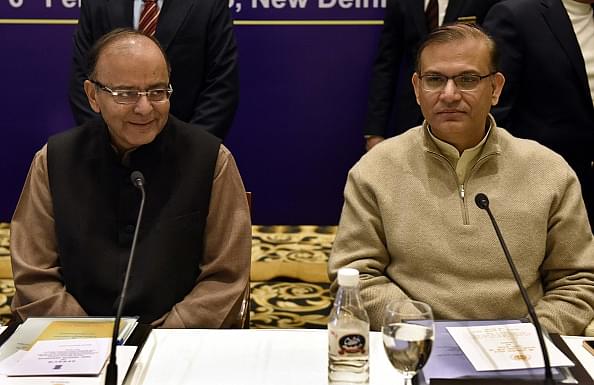 Given the fragile state of the global economy, still leveraged corporate balance sheets, and a struggling banking system, here is the stark choice facing the finance minister: either do fiscal consolidation or have growth.

With the budget around the corner, the finance minister is being bombarded with advice, most of it recommending him to pursue fiscal consolidation. Among those warning him is RBI Governor, Raghuram Rajan. Swarajya also recently carried an article titled, “Fiscal Insanity: We Need More Deficit Spending Like a Hole in the Head” by Shanmuganathan Nagasundaram,  (February 3, 2016). Yet, the emphasis on fiscal consolidation is misplaced. India’s debt-to-GDP ratio is near its lowest level in more than two decades. Moreover, given the fragile state of the global economy, still leveraged corporate balance sheets, and a struggling banking system, here is the stark choice facing the finance minister: either do fiscal consolidation or have growth.

GDP Figures Are Deceptive—Economy is Sluggish

India’s 7+ percent pace of economic growth appears robust. Yet, there is widespread disappointment with the direction of the economy. Indeed, a wide range of indicators—corporate earnings, manufacturing production, capacity utilization, exports, business investment plans, and nonperforming loans—show an economy that is far from robust.

Meanwhile, the stock market has erased all the gains following Prime Minister Modi’s historic victory in 2014. Against the array of indicators showing a sluggish economy, the strong real GDP growth figure stands out like a sore thumb, underscoring doubts about the new methodology. Whatever the methodological issues with the GDP data, the growth rate of nominal GDP, at below 11% rate—the weakest growth since the fourth quarter of 2008—is actually consistent with the other data noted above. (Nominal GDP is value added in the economy in today’s prices whereas real GDP attempts to measure the same thing by stripping out price changes or inflation).

While it makes sense to look at real GDP when inflation is high, nominal GDP is a better gauge of the everyday experience of businesses and households when inflation is low. Moreover, when certain categories experience large price declines, such as commodities in the present time, real GDP can often present a misleadingly strong picture.

The Economy is Listless Because Business Investment is Weak

A major reason why India’s economy has been lackluster is that business capital spending is still anemic. The three C’s that drive business spending—cash flow, credit availability, and capacity—are not supportive. The jump in non-performing loans (NPLs) announced by ICICI indicates that cash flow is falling behind debt service payments. Moreover, capacity utilization levels in manufacturing remains low. Businesses expand and hire when they are swamped with demand not when they have slack capacity. Meanwhile, banks are in no position to expand lending given the large NPLs and still shaky capital position. Furthermore, the corporate sector is burdened with excessive debt and is attempting to deleverage, which is also holding back capital expenditures.

What can the government do to re-accelerate growth?

The pink paper regularly perorate the lack of big bang reforms under Modi, and state with great authority that reforms will unleash growth. Announcement of reforms will in all likelihood spark a major rally in the stock market, but, given the balance sheet constraints on businesses, reform is not going to trigger a capex recovery.

In popular imagination, the 1991 reforms immediately ignited frenetic business activity. It actually did nothing of that kind. Apart from the official data, I have personal experience of that period from the trenches of banking. I started my first job—with the then Industrial Credit and Investment Corporation of India—in the immediate aftermath of the reforms in 1991. New project lending did not pick up until 1993-94, although there was a major stock market boom that ended with the Harshad Mehta imbroglio.

To be sure, reforms are necessary for promoting long-term productivity and competitiveness, but they are simply not going to work wonders in the present environment.

Why Fiscal Consolidation Will Hurt Growth

By now even the bastion of fiscal rectitude, the IMF, has softened its stance on fiscal consolidation in a global economy afflicted by general glut. However, there is still a great deal of misunderstanding about the working of the macro-economy, much of it stemming from extending logic that works at the micro level to the macro sphere.

Unfortunately, intuitions that work at the micro level often do not scale up because of the fallacy of compositions. For example, a single firm can improve its bottom-line by increasing productivity; if all firms improve their productivity, the economy will unquestionably benefit in terms of higher standard of living, but the aggregate business sector will experience no increase in profits (for simplicity, I am assuming a closed economy and excluding the possibility that increased productivity may enable the country to grab greater share of global exports).

To understand why fiscal consolidation and robust growth cannot go hand in hand in present circumstances, we need to look at aggregate flow of funds and sector financial balances. The business sector is currently trying to pay down debt, which is only possible if, in the aggregate, that sector runs positive financial balances. That is, the sector must generate positive free cash flows (free cash flow is cash flow less capital expenditures). For the business sector to run a positive financial balance, other sectors in the economy—households, government, and foreign—together must run a financial deficit.

Currently, India runs a small current account deficit, that is, the rest of the world is running a financial surplus with India. India cannot bank on further improvements in the CAD. Despite the bonanza from the plunge in petroleum prices, the current account has been largely flat because the weak global economy has caused exports to decline sharply. While theoretically the household sector can embark on a sustained debt-fueled spending spree and spur economic growth, in practice the prospects are limited. Most Indian households have limited access to formal credit channels and, banks and Non Bank Finance Companies are in need of capital injection and hardly in a position to step up lending. Moreover, given the lack of social insurance, and the potential for abuse/exploitation by debt collectors, increasing the leverage of the household sector is neither feasible not desirable.

Having just about brought the inflation monster under control, there is an understandable concern that fiscal expansion will stoke inflationary pressures. Evidence suggests that periods of fiscal expansion have been generally followed by accelerating inflation in India.

However, the episode from the past that closely mirrors the current situation suggests that fears of fiscal deficits fueling inflation are misplaced. From 1998-2002, the corporate sector underwent balance sheet consolidation—in many ways similar to the present experience. During that time, the government ran substantial fiscal deficits, propping up the economy. Unsurprisingly, government debt as a percentage of GDP climbed, peaking in 2004 at about 63 percent for the central government—much higher than the current level of 46 percent of GDP. All the while inflation remained contained because, then, as now, oil prices were low and global commodity and food prices were subdued.