Inflation-Targeting Is A Dud, And The MPC Will Not Help Us Get There 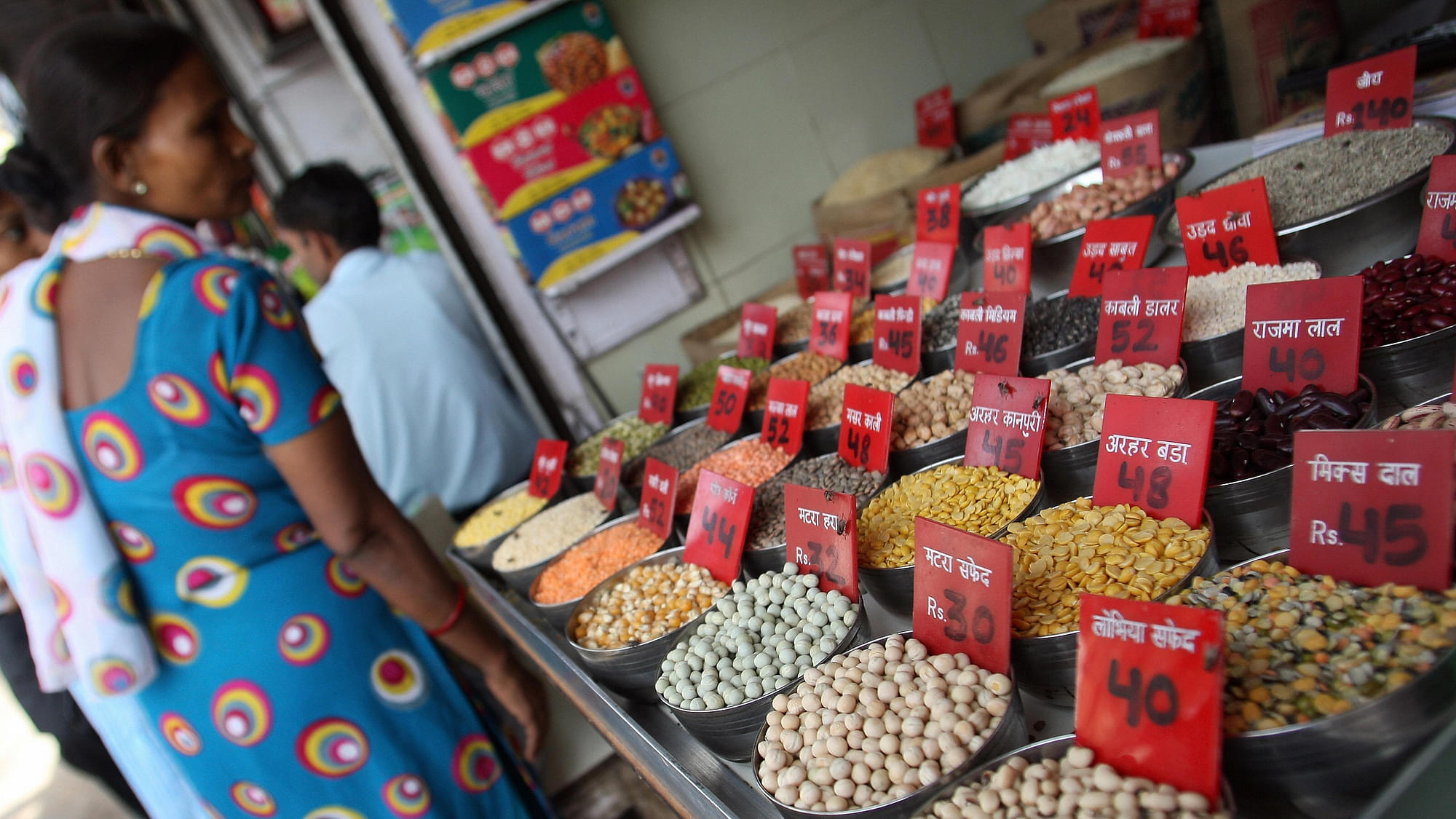 An Indian woman checks the price of pulses and grains at a wholesale market in New Delhi. (MANAN VATSYAYANA/AFP/Getty Images)

The latest wholesale (WPI) and retail (CPI) inflation numbers should raise serious doubts about the use of blunt monetary and fiscal policy instruments for achieving macroeconomic goals – including the crude targets set for inflation and fiscal deficits.

In February 2017, WPI hit a 39-month high of 6.55 per cent, and CPI turned upwards to 3.6 per cent. The former indicates that we are on the threshold of the mother of all inflations, which is manifestly untrue, and the latter points to future risks in keeping inflation around the 4 per cent middle rate agreed between the Finance Ministry and the Reserve Bank of India (RBI). The CPI looks more real, but flies in the face of the anaemic growth we have seen of late.

Consider the tight monetary and fiscal backdrop against which these index spikes are occurring.

#1: The fiscal deficit trajectory has been on a downward slide for five years running. In short, it is deflationary in direction at a time when growth has been decelerating too.

#2: Add the effects of demonetisation, and we have seen a further deflationary push from the fiscal-monetary side.

#3: Taxation policy, especially in fuels, has been aggressive, which means high fuel taxation has also had a deflationary effect on growth.

#4: Monetary policy has been shifted from “accommodative” to “neutral”, which seems terribly prescient of the RBI given the February inflation numbers, but if we consider that a significant chunk of the 175 basis points cut in the repo rate since early 2015 is still to be passed on to customers, effective lending rates are still high relative to growth needs. The RBI may think it controls rate policies, but it is government or banks who take a final call.

#5: Since deflationary conditions persist in the global economy, it is hardly likely that India is going to be growing like gangbusters.

What the above factors indicate is that monetary and fiscal policies deliberately aimed at bringing inflation under control without damaging growth have not quite delivered: growth remains tepid, and control of inflation is illusory.

For example, the RBI has fretted about core inflation remaining sticky to halt rate cuts, but just when both WPI and CPI soared in February, due to food and fuel inflation, core inflation actually fell by 20-30 basis points. This could be due to the deflationary impact of demonetisation, but then the argument becomes needlessly inconclusive. When core is up, the RBI will not cut rates; but when non-core is up, then it will fret about food and fuel feeding through to inflationary expectations. When growth keeps tapering, the RBI will not help since inflation is a threat. In short, the obsession with inflation is a meaningless one. In effect, only if an act of god manages to impact all three ingredients of inflation – food, fuel and core – will the RBI act. If only god can help, why put one more god on Mint Street to confuse things?

It is time to move away from western paradigms of fixating on one number – inflation for the central bank and budget deficits for the government – as the right targets for monetary and fiscal policy. These policies are failing even in the US and Europe, and in India they are even less relevant, given the huge impact supply-side factors, administered pricing and inter-state regulations have on inflation and growth. When food inflation can be impacted by just one item – say, dal – it makes more sense to fix this supply problem than to clobber the whole economy with higher interest rates.

Even though this writer has been gung-ho about inflation-targeting and fiscal deficit controls in the past, he believes that it is foolish to hang on to ideas that are not working in practice. It is time to adopt more nuanced policies that work in the Indian context. Not that inflation is not something to target, or that fiscal deficits should be allowed to bloat recklessly, but the mix of policies needed may not be the conventional ones – raising rates or cutting government capital expenditures. Blunt instruments need to be replaced with sharper ones.

One, broad targeting of a 4 per cent inflation number needs to be abandoned. Instead, inflation must target the specific drivers of inflation – whether it is one commodity, or a range of commodities, or whatever. Food inflation, for example, is better targeted by controlled increases in minimum support prices, and fixing supply issues in specific food items (eg, dal). Fuel inflation can be controlled through duty changes to moderate their impact, especially when excise comprises such a huge chunk of the final consumer price.

Two, fiscal deficit targeting must be counter-cyclical, and not pro-cyclical, as they have been for the last five years. The United Progressive Alliance’s (UPA’s) follies have been adopted by the National Democratic Alliance (NDA), with negative impact on growth and jobs. Fiscal restraints when growth is weak must be focused on cutting revenue expenditure, and not be neutral to which expenses are cut. The UPA decision to cut capital and plan expenditures has prolonged the agony, with the investment cycle being throttled rather than watered. In the NDA context, the government’s failure to recapitalise banks to the extent required is a huge dampener, and this failure is related to the obsessive need to keep the fiscal deficit on a downward trajectory. If oil prices had not started coming down in 2014, the government’s fiscal targets would have killed whatever growth was left in the economy. Again, it is an act of god that saved us from killing growth, not the fiscal policy.

Three, the Monetary Policy Committee (MPC) is a needless luxury. We don’t need six economists trying to figure out whether the repo should be cut by 25 basis points or not; this task could have been done as well by the old technical advisory committee, which gave the Governor advice and let him take the final call. Six heads, possibly all involved in groupthink (three MPC meetings have so far delivered 6-0 verdicts unanimously), are hardly better than one. In any case, if the RBI falls behind the curve on raising or cutting rates, it can claim the MPC did it, and avoid the blame. It can hardly make for better accountability. In the past, you could at least blame the RBI Governor, now neither MPC nor RBI can be blamed for inflation or rates.

Four, the MPC should be replaced by a PMC – a price monitoring committee of microeconomists and macroeconomists – who can pin down what is causing a specific commodity or group of commodities to spike or fall, and focus on recommending the right mix of monetary and fiscal policies, including supply side steps, to combat this spike. To fix an inflation problem, both RBI and the Finance Ministry must act. It is not the RBI’s job alone.

Five, instead of having an elaborate MPC, and instead of cogitating endlessly about the RBI’s autonomy or lack of it, the sensible thing is for the RBI Governor and the Finance Ministry to meet once a month and decide on the right mix of monetary, fiscal and supply-side policies needed to fix a particular kind of inflation. All inflations are not the same. Sometimes they are commodity-specific, sometimes they are generalised. The RBI and the ministry will be more effective when they act together rather than if they act separately in compartments once the problem is correctly understood. Western binaries of keeping the central bank and the government operating in separate isolation chambers makes no sense.

Six, the WPI is outdated. It must be scrapped and replaced with a producers’ price index.

Our obsession with mindless targets emanates from the reality that rating agencies and armies of economists are used to looking at these numbers in the West. One wonders why we have to feed these data-monsters their daily dose of titbits when this is not doing us any good.