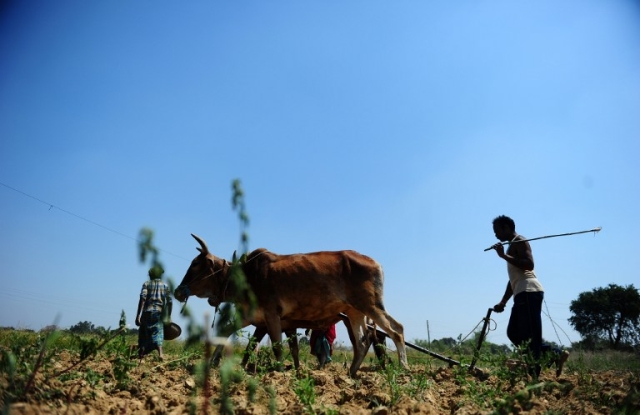 The average size of a farm holding in India was 1.33 Ha in 2011 as against 0.6 Ha in China, yet the productivity in China is higher by a drastic amount in most crops. Here is how land and tenurial issues can be fixed to increase productivity.

While leafing through the piece I wrote on Kutch farmers, I happened to be thinking about what more could be done to give hope to the ‘poor farmers’, I found a headline that caught my attention. This happened to be Jyotiraditya Scindia accusing the Prime Minister of striving for Kisan-Mukt Bharat.

That set me thinking. Isn’t Kisan-Mukt Bharat actually a desirable goal? Kisan has become a stereotype – a poor, emaciated, deprived character who is silly enough to cultivate land for some arcane contribution to the nation. That being the case, it is absolutely desirable that the PM strives to do away with this stereotype and creates a farmer whose business is farming.

No. That’s actually the way to go. The only limitation that we have had over the years is that there isn’t enough public investment in promotion of the business of farming. The following structural, technological, marketing and financing issues need to be addressed.

1)  Land and Tenurial issues, including change of land use and acquisition/pooling/consolidation. 2)  Irrigation Technology 3)  Seed, breed and tissue culture technology 4)  Post-harvest and marketing issues, including FDI in food retail, markets and APMC Acts 5)  Credit, insurance, and financing.

So let’s start with land and tenure issues involved with making a business out of farming. It’s repeated ad nauseum that small holdings are a bane of India’s agriculture. 85% of holdings are smaller than 2 hectares and that limits the capacity of a farmer to either upgrade his technology or better the quality of inputs. It also increases his vulnerability to vagaries of weather. What is not stated is that nothing limits a farmers’ access to information except his unwillingness to cast away the robes of a farmer and don that of a businessman.

Consider this: The average size of a farm holding in India was 1.33 Ha in 2011 as against 0.6 Ha in China, yet the productivity in China is higher by a drastic amount in most crops. It is well known that the small farm size inhibits mechanization and absorption of technology, and also diminishes the ability of a farmer to gain access to quality inputs and credit. Then, why is the productivity in China so much higher?

The reasons straddle the entire spectrum, but let us see how the issue of land was solved by the Chinese. In China, it is perfectly legal to lease out land to another farmer. As the hunger of Chinese factories for labour multiplied, a large section of peasantry headed towards the industrial centres. These peasants were given the additional benefit of being able to collectively lease out their land to the farmers who remained behind to till the land. This is further made easy for the fact that all land in China is communally owned and letting it out for contract farming is also another enabling process.  This enabled consolidation of land holdings in the rural areas and farm incomes tripled and quadrupled to keep pace with the industrial incomes. The acquisition of land for infrastructure is also easy as no one can sell any land directly to business or industry.

Some of this is not possible to replicate in India, but we do have a long experience in the imposition of land ceiling and consolidation of land. The solution for us lies in a robust and transparent land market with minimal information asymmetry between the buyer and seller. What we have in India is exactly the opposite of China. While we impose all the restrictions that China imposes on selling of agricultural land for non-agricultural purposes, we don’t provide the exit route. The irony is that being a democracy, it should be very easy for us to provide for a land market.

This creates distortions which benefit neither the economy nor the farmers. Those who want to sell their land face market hurdles, particularly the SC/ST who can sell their land in most cases only to an SC/ST; those who would like to retain their land but have no appetite for the risks that farming small parcels of land involves don’t have a reliable market in which to lease or license or sub-contract their lands without the fear of losing it eventually. The allotment of land to sharecroppers in the past has created a fear psychosis which prevents optimum utilization and consolidation of land. Governments have to address this 21st century problem if the poor farmer has to be rescued from a vicious cycle of low yields, high risks and resultant poverty.

Land Acquisition is a very maligned word, but if one travels around the villages adjoining metros, there is little resistance to acquisition, consolidation or outright purchase. The key word is fair compensation. The 4 times the government rate or twice the market rate is very attractive. One only has to look at the process adopted in the purchase and acquisition of land for the Agra-Lucknow Expressway to realise that the opposition being raised is just bogus.

The insertion of a consent clause and social impact analysis is the surest way of developing land mafia in the business of acquisition. These people will buy the land from farmers at dirt cheap rates and then use their power and influence to rig the process to obtain the maximum advantage for themselves. Land Acquisition hardly ever takes away the means of sustenance of a person whose land is acquired.

In fact, if the person is sensible enough, it actually provides him the means to do level jumping in the economic order. As a collector, I had once de-notified the acquisition of a politician’s land which was bang in the middle of town. The man kept fighting the case challenging the de-acquisition for the next 20 years till the town leapfrogged to economic stardom. That should tell you that acquisition is often seen as beneficent in poorer areas.

I have mentioned the land consolidation and redistribution model of Ahmedabad a number of times. In fact, this is the best model in urban areas. The logic is simple: if you don’t throw a man out of the game of land, he would be more than willing to part with his piece and take one elsewhere. Ahmedabad’s 3rd ring road is made without a single acre of land acquisition.

The simple thing they did was to use the local Country and Town Planning Act and notify thrice the area of the ring road for consolidation and redistribution with the ring road passing down the middle. Not one demur as everyone stood to gain even if they ‘lost’ about a third of their land and all those through whose land parcels the ring road was passing had to relocate. Those relocating were given the lands nearest to the road and everyone else was accommodated behind them with reduced area. What a fantastic idea! The whole town of Bhuj was rebuilt and renovated using this methodology after the earthquake.