Long Read: For the Love Of Environment, Punjab Needs The Farm Laws 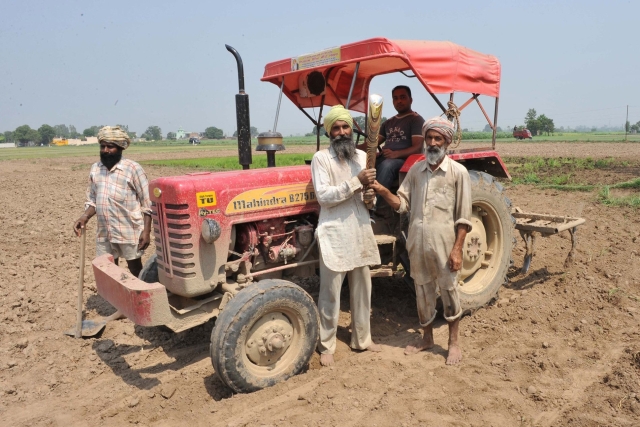 The unraveling of the Greta Thunberg endorsed toolkit and the noise around the arrest of a 21-year-old self-proclaimed environment activist, Disha Ravi, last week from Bengaluru, has shifted the goal post in the farm laws debate yet another time.

This time, the focus is on the environmental aspect of the farm laws.

From paid activists to middlemen and farmers protesting the new farm laws, the common argument is that the involvement of the private sector will further degrade the ecological ecosystem in the countryside, and therefore, it is in the best interests of the environment to leave the farmers without the private sector option.

The skeptics could not have been more wrong, however.

When viewed only from an environmental perspective, the new farm laws could have helped contain the damage resulting from the degrading agricultural ecosystem of Punjab.

Investments in technology, diversified crops, and better fertilisers would have consequentially aided the recharge of depleting groundwater levels as well.

Punjab, also claimed as the breadbasket of India, contributed more than 25 per cent to the central pool for paddy, and this is when it has only 7 per cent of the total area cultivated for rice in India.

For wheat, the contribution in the central pool in 2018-19 was 35 per cent even while it houses merely 12 per cent of the total area cultivated for wheat in India.

After the green revolution, the state’s focus has been merely on two crops, wheat and paddy, followed by cotton.

Other crops like sugarcane, barley, pulses, oilseeds, maize, bajra made up for the remaining cropped area.

However, the disproportional and unsustainable focus on wheat and paddy has evolved over a period of time.

Interestingly, the agricultural yields of cereals, pulses, and oilseeds in Punjab are higher than the national average, thanks to the mindless use of pesticides and fertilisers.

What is concerning about the use of fertilisers in Punjab is their unbalanced use.

These trends have resulted in a high occurrence of cancer in the villages of Punjab and deteriorating land quality. The infamous cancer train from Bathinda to Bikaner has been a subject of multiple studies and reports.

However, if fertilisers and pesticides are rendering the fields of Punjab useless, it is the groundwater depletion at an alarming rate that is turning heads in the state.

The MSP-motivated cultivation of wheat and paddy is now leading the state towards imminent desertification with exhausted groundwater resources.

In Punjab, groundwater extraction for irrigation alone exceeds 90 per cent, more than any other state in India. Barring Rajasthan, the most over-exploited blocks in terms of groundwater are located in Punjab.

Still, the annual groundwater extraction was at 35.78 bcm, putting the extraction at 166 per cent, the highest for any state in India. Even for Rajasthan, it’s less than 140 per cent.

If one goes by the Dynamic Groundwater Resources Assessment of India – 2017, of the 35.78 bcm groundwater extracted, 34.56 bcm goes to irrigation.

It turns out, the groundwater used by Punjab for irrigation is almost equal to that used by Gujarat, Haryana, and Rajasthan, and merely 5 bcm less than what Uttar Pradesh, a state 4.9 times bigger than Punjab, uses.

All this water goes to cultivating MSP-assured wheat and paddy.

The problem, however, lies in the future. The net groundwater availability in 2025 for Punjab is not even enough to compensate for its domestic requirements.

Other states suffering from the same issue include Delhi, Himachal Pradesh, and Rajasthan.

Thus, Punjab’s obsession with MSP-assured wheat and paddy will not only become impossible in the next 10 or 15 years (being optimistic) but make water-intensive cultivation almost impossible too, threatening the livelihood of countless farmers.

Thus, if the current trends hold, Punjab’s groundwater levels will be exhausted, and the lands by virtue of extensive usage of fertilisers and pesticides will be completely depleted. Either way, the wheat-paddy agri-economics cannot be sustained.

This is where the farm laws could have helped the state.

Firstly, by opening up the farmers to the option of contract farming, it could have resulted in a shift away from wheat and paddy. Currently, the state has less than 5 per cent of the cropped area under fruits and vegetable cultivation, to begin with.

The vicinity to areas of high population density, literacy, extensive infrastructure (highways, railways, airport), and larger landholding size than the national average could have resulted in sweet deals for the farmers of Punjab from the corporates they have been brainwashed to abuse today, amongst many more.

The opening up of markets beyond the APMCs could have ensured farmers can reach out to corporates outside the state, and perhaps, India. The Pepsico experiment could have been taken to many more farmers in the state.

Another unfortunate aspect of the ongoing protests is how the role of the private sector has been perceived.

The entire debate around private sector participation has been reduced to MSP, pricing, payments, and so forth. However, the potential, opportunities, and ongoing roles of the private sector in India’s agriculture lie beyond all this.

Most of these aspects have a direct impact on improving the ecology of the land. For instance, farm mechanisation and automation can check the use of pesticides and water.

Already, many private players are working in the agricultural sector, aiding the improvement in the farm inputs used and water resources utilised.

Cropin and BharatAgri are addressing the challenges of precision agriculture and farm management. DeHaat and BigHaat are aiding farmers with better returns by creating a transparent digital price platform for farm inputs and eventual output.

Intello Labs and Agricx are working in the domain of crop quality monitoring and helping farmers with AI imaging, technologies not even the rich farmers of Punjab would invest in.

SourceTrace and Frontalrain are critical players in the produce traceability segment.

Lastly, Tartan Sense and TerraCroft are working on robotics and drone solutions for farms, addressing the problem of labour shortage and taking the next big leap in farm mechanization.

Through supply chain improvements, private sector participation (PSP) can tackle the current problem where close to 40 per cent of the food grains produced are wasted in either transition or godowns.

With unpredictable shifts in climate, given a mere one-degree centigrade increase in temperature can result in the loss of 4-5 million metric tonnes of wheat, and untimely rains impacting small farmers, sometimes wiping their entire crop out, the PSP and investment in climate-resilient technologies would go a long way in aiding India’s agricultural sector.

'More crop for each drop' would also be made possible with increased investments in data-precision irrigation techniques as the declining groundwater levels begin to haunt India, starting with Punjab, where the groundwater exploitation is the most.

Currently contributing 16 per cent of India’s GDP, the market potential of India’s agritech market alone is close to $24 billion, and the turnover is estimated at more than $150 billion. The penetration, however, is less than one per cent if one goes by a recent report by E&Y.

There are lessons that can be learned from China as well when it comes to PSP.

Already, China is leveraging the capabilities of 5G, Artificial Intelligence, drones, and community-supported agriculture. In China’s 2019-2025 Agriculture Digitisation Plan, the aim is to take the proportion of farming goods sold online to 15 per cent.

For the farmers of Punjab, a depleting groundwater supply, degraded lands, and diminishing returns on MSP threaten their livelihoods, and hence, the farm laws could have ushered in new opportunities.

As the implementation of these laws stands stalled by the apex court, the protesting farmers and middlemen must use this time to realise their folly and how they are cursing their futures.

Greta or Disha may have several toolkits up their sleeves, but no toolkit can stop the imminent doom of the wheat-paddy agri-economy of Punjab. For the love of the farmers’ livelihood and for the love of the environment, Punjab needs these farm laws. Anything less is an agri-apocalypse.