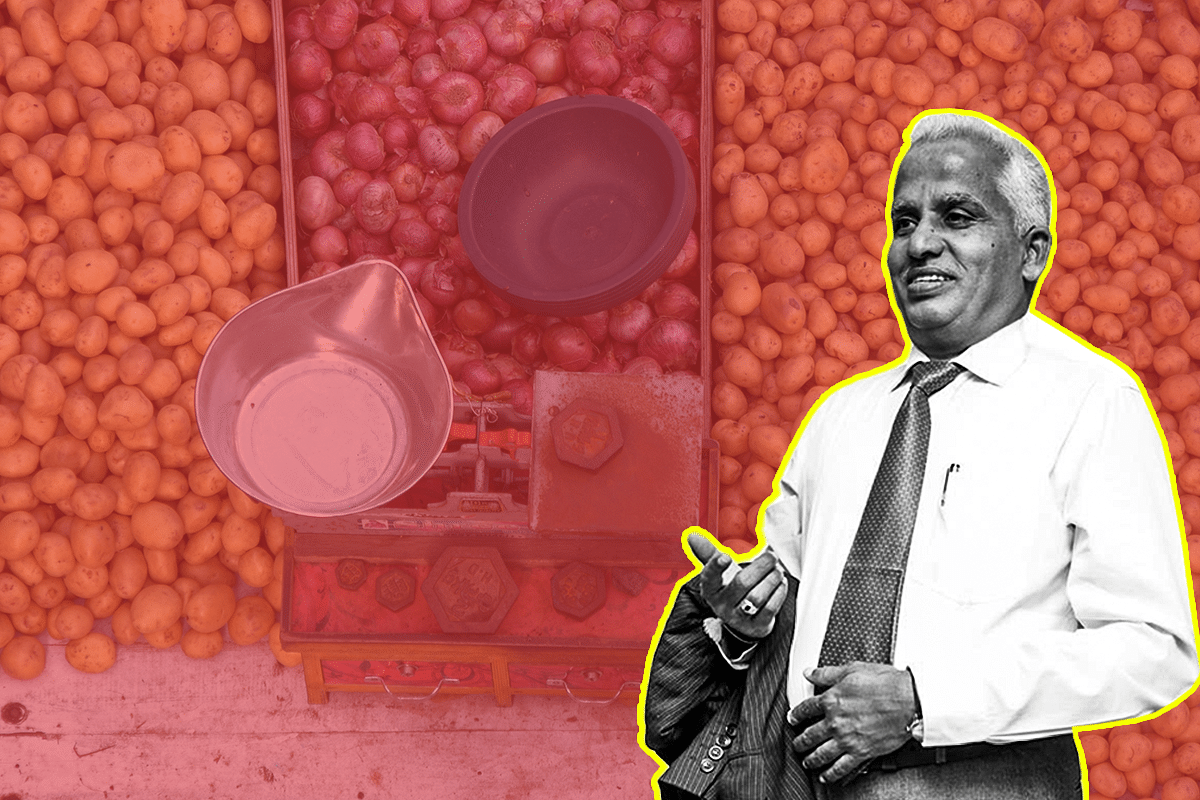 Dr P Kanagasabapathi is a professor, author, writer and a social activist who has donned several hats in his illustrious career. He is known for his pioneering field studies in industrial and business clusters in different parts of the country. He has also been involved in studying the Indian economic, social, business and management systems from the native perspectives.

Kanagasabapathi, former director of the Tamil Nadu Institute of Urban Studies, Coimbatore, was part of the team that undertook the study of Gujarat kite industry on the invitation of the State government in 2003 when Prime Minister Narendra Modi was at the helm of the State as chief minister.

The professor, who had also been a president of a cooperative bank, has written many books including the Indian Models of Economy, Business and Management.

He is also the vice-president of Bharatiya Janata Party's Tamil Nadu unit.

In an interview with Swarajya, Kanagasabapathi explained the significance of the recent agricultural reforms implemented by the Modi government and said that the Opposition, especially the Congress and Dravida Munnetra Kazhagam (DMK), is trying to deliberately mislead the people and nation. “Their objective is to defame the Modi government by spreading false news for electoral reasons,” he says, adding that the Agriculture Produce Marketing Committee (APMC) system is plagued by various problems.

1. How do you view the agricultural reforms brought in by Prime Minister Narendra Modi? What is the feature of the reforms? What changes can these reforms bring to the rural economy, particularly to a farmer's family?

The Union government has been taking up several measures to help the farmers over the last six years. We all know that the agricultural sector in the state of Gujarat was able to achieve double-digit growth when Modi was the chief minister through his path-breaking initiatives.

The recent reforms are in continuation of the many initiatives of the government. The main feature of these reforms is liberating the farmers from the control of the state and allowing them to sell their produce at the best possible price anywhere in India.

These reforms would help the farmer’s family to get higher earnings.

The major problem with the farmers is that during the harvest seasons prices tend to be low in the local markets as the supply is more. There have been several instances in Tamil Nadu over the last 40 years in which the farmers used to throw their tomatoes on roads when the prices dropped steeply.

Such items would be able to fetch higher prices in distant places and cities. Now, the farmer can take his produce anywhere in the country, where they are in demand.

Besides, the farmer can enter into agreements with the buyers, as their rights are well-protected. Since there are several hundreds of buyers across the country, farmers will be able to get competitive rates.

When we see these reforms along with the earlier initiatives of the Modi government such as e-NAM and the Kisan trains, we can realise the opportunities available to the farmers to earn higher incomes. So these reforms are certainly going to bring huge benefits to the rural economy.

2. Former chairman of the Commission for Agricultural Costs and Prices, Ashok Gulati, has termed these reforms as significant as the 1991 economic reforms. Some have said that they are far more than that as they lead to real "ease of doing business"? How do you view them?

As one coming from a farming background with knowledge in market economics and with experience as the president of an agricultural cooperative bank, I feel that the present reforms are revolutionary, for they have freed the farmers from the shackles of the state mechanism after many decades.

It is true that the reforms have created a situation where there would be “ease of doing business” for the farmers. They have the choice to choose their buyers and sell their produce across the country at the best possible price. Such an environment was not available to them so far.

Yes, the opposition parties such as the Congress and DMK are deliberately misleading the people and the nation. We all know that the Congress party in its manifesto during the last parliamentary elections promised some of these very reforms.

During 2012, one of their senior ministers, Kapil Sibal, had stated in Parliament that the farmers get only 15 to 17 per cent of the final price that consumers pay, while the rest goes to the middlemen and hence steps should be taken to help the farmers.

So, it is clear that now they are enacting a drama.

Their objective is to defame the Modi government by spreading false news for electoral reasons.

They always see the farming community as an important vote bank.

One of the main reasons for their victory in Tamil Nadu during the 2019 parliamentary elections was wrong propaganda and false promises. They feel that they would benefit from such an approach every time. But the people are smart.

The functioning of the APMCs has remained unsatisfactory over the years. State control, interference by the vested interests, bureaucracy and corruption are some of the main reasons that affect their functioning.

I have personally witnessed several drawbacks of the system in the markets and have also heard many farmers explaining the difficulties that they underwent at APMCs. For example, price fixation is not transparent in many cases.

Corruption is another important drawback.

5. How far are the provisions on contract farming different from earlier ones? What is the feature of this bill that will help the growers?

The provisions of the Farmers (Empowerment and Protection) Agreement on Price Assurance and Farm Services Bill 2020 relating to contract farming are different in many ways.

It has created a framework for agreement between the farmers and the buyers and provides complete legal protection to the farmers.

Now, farmers can enter into contracts with firms, exporters, processors, wholesalers, large retailers or others for sale of their produce at an agreed price confidently.

Any agreement relating to the sale, lease or pledging of the lands of the farmers are prohibited.

The agreements are for specific items and limited periods only.

The risk of uncertainties relating to the markets are transferred from the farmers to the buyers. Farmers are assured of payments for their sale within the specified periods.

Besides, there is an effective dispute settlement mechanism in place with timelines for redressing the issues.

The Bill contains many features that will help the growers. From providing legal protection for agreements with buyers, to assuring payments within the specific periods and offering three-level dispute settlement mechanisms, it is designed to help the farming community.

How do you view the co-existence of APMCs along with the new system of agricultural marketing that these reforms will bring in?

The new system of agricultural marketing would in no way affect the existence of APMCs. They (APMCs) can function as before under the authority of the States concerned. Now the farmers have the choice to sell their produce either through APMCs or outside, based on their choice.

Your views on minimum support price (MSP), government procurement and how they have been implemented till now? Wouldn't MSP have to end at some point of time since India is under pressure from the WTO?

After the Modi government took over in 2014, there are positive developments regarding the implementation of MSP and the government procurements.

Earlier it was arbitrary.

From 2018-19, MSP is fixed at 1.5 times the production cost of farmers. So, the farmers are assured of prices that are at least 50 per cent over and above their production costs.

Before 2014, MSP was largely confined to wheat and rice. But in the last six years, they have been extended to another 20 plus items including pulses.

Similarly, government procurement has been increasing over the last few years and for the latest year (rabi marketing season), it has been a record.

Agriculture is the primary and the most sensitive sector in the world. Different countries, especially the richer ones, offer huge subsidies to keep their agriculture survive. Against this background, it is imperative that the Indian government has to support the agricultural sector.

WTO is becoming less effective due to its fault lines, particularly due to the attitude and approach of the developed countries.

Do you think our previous governments had failed to protect farmers' interests at the WTO? Should India press for renegotiation on this?

Now India is not afraid to take on the vested interests and powerful blocs, as it used to be earlier. We have started pressurising for renegotiations in sectors that matter to us. But the future of the WTO itself is bleak. We have to wait and see.

How far will these agricultural reforms help consumers?

In the present system of agricultural marketing, both the farmers and consumers lose heavily. It is only the middlemen and hoarders who make huge money.

For most of the items, the prices that the consumers pay are many times higher than what the farmers get. So, when the middlemen are eliminated, the consumers would be able to get their requirements at reduced prices.

Thus, it would be a win- win situation for both the farmers and the consumers.

Opposition parties allege that the reforms would facilitate the takeover of agriculture by the corporates. Is it true?

It is not true at all. There would be many buyers such as the exporters, processors, wholesalers, large retailers besides corporates. Corporates are one among the different players.

In such a situation, no one player or group of players would be able to dominate, leave alone taking over.

The buyers would be in several hundreds. As a result, there would be competition among the buyers, leading to the farmers getting the highest price.