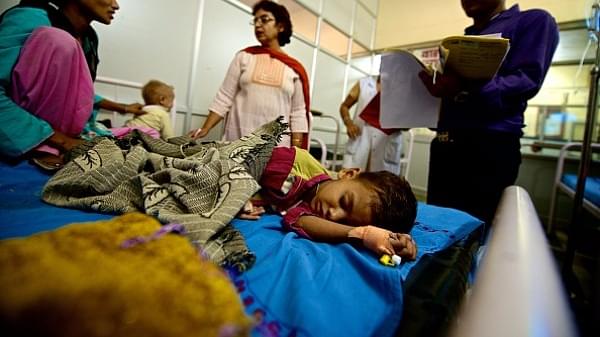 Children suffering from malnutrition getting treated at Guru Gobind Singh Hospital in 2014 in New Delhi. (Priyanka Parashar/Mint via Getty Images)

After almost two years since NITI Aayog was tasked with drafting a national policy for tackling malnutrition, the think tank has finally come out with a 10-point Nutrition Action Plan.

The National Nutrition Strategy focuses on governance reforms, convergence of state and district implementation programmes, counselling and community-based monitoring to improve the health of the country.

Food and Agriculture Organisation (FAO), a United Nations body, defines undernourishment as a situation where a person is not able to acquire enough food to meet the daily minimum dietary energy requirements over a period of one year. Hunger is then defined as chronic undernourishment.

According to the organisation’s report, titled ‘The State of Food Insecurity in the World 2015’, India had over 194.6 million (14.9 per cent of the total population) undernourished people. The numbers from Global Nutrition Report 2016 are equally bleak; the report assessed India’s progress towards Global Targets 2025 as “off track”. India ranked 114 of a total of 132 countries that were assessed for prevalence of stunting among children under the age of five. India’s rank was even lower than countries at war and with a much smaller gross domestic product (GDP) such as Somalia (76) and Syria (80).

Another important category assessed by the report was “prevalence of anaemia among women of reproductive age”. Here, again, India ranks 170 of the 185 nations that were assessed.

A comparison of three primary indicators of child undernutrition – stunting, wasting and underweight for children below five years of age based on National Family Health Survey 3 (2005-06) and 4 (2015-16). As evident, while the prevalence of stunting and underweight has gone down, trends in wasting show an overall increase in the last decade.

Such deficiencies take a toll not only on an individual’s health but also on the economy and society at large, as the productivity declines and the cost incurred on healthcare increases. Given that India prides itself as a young nation, it becomes imperative to invest in improving the nutritional status of people so that they can transit from being a burden on state’s resources to assets for the nation.

Moving towards a “Kuposhan-mukt Bharat”

The background to the National Nutrition Strategy can be found in the previous initiative of the government, most notably National Nutrition Policy (NNP) 1993. The policy was adopted by the Government of India under the aegis of the Department of Women and Child Development. The National Nutrition Council was then set up as part of the Planning Commission in 1994 to develop a comprehensive, integrated and inter-sectoral strategy for addressing the multi-faceted challenges of malnutrition. Though a well-intended policy document, NNP had failed to bring India out of the chronic cycle of hunger and malnourishment. The new National Nutrition Strategy is now being seen as an answer to India’s nutrition problems.

Formulated through an extensive consultative process with the concerned ministries and international agencies such as World Bank and the United Nations Development Programme (UNDP), the strategy lays down a road map for effective action to eradicate malnourishment. It envisages a framework wherein the four proximate determinants of nutrition – uptake of health services, food, drinking water and sanitation, and income and livelihoods – work together to accelerate the decline of undernutrition in India. The strategy envisages a “Kuposhan-mukt Bharat” along the lines of Swachh Bharat and Swasth Bharat, through the creation of customised state and district action plans to suit local needs. This is especially relevant in view of enhanced resources available with the states, to prioritise focused interventions with a greater role for panchayats and urban local bodies.

The framework policy intends to achieve its goals by 2022 through the following core strategies:

Given the multi-sectoral nature of interventions, this is perhaps the most important sector that needs reforms. Under governance reforms, the strategy envisages an expansion of the Prime Minister’s National Council on India’s Nutrition Challenges, Women and Child Ministry, to be the nodal agency for the mission, and constitution of a Committee of Secretaries from different ministries chaired by NITI Aayog’s chief executive officer.

It is further recommended that the states or union territories (UT) would have a parallel governance structure at their levels under the leadership of the chief ministers, to drive the nutrition initiatives in their jurisdiction.

b) Leading by example – enabling leadership at the state, district and panchayat levels

The strategy builds on the recognition of cooperative federalism and thus allows states to design locally relevant strategies to achieve state-specific goals. States are further expected to encourage districts, blocks and panchayats to come up with specific plans. Good performance is to be recognised and rewarded following the example of Swachh Bharat Abhiyan.

Convergence is seen through two lenses: geographic and programmatic. The convergence between the state, district and village panchayat levels is to be achieved through the State and District Nutrition Plan implemented through the Village Health and Nutrition Day.

This flows from the strategy of geographical convergence. As huge gaps exist between districts and states, focused interventions will be designed for districts and blocks that fall behind the desired level of nutrition among women and children.

Keeping with the life cycle approach, the strategy calls for preventive early action in the most vulnerable period – prenatally, at birth, in the neonatal period and early infancy as intervention during these critical periods can impact an individual’s health and nutrition status over the lifetime.

This is to ensure continuous availability of healthcare services across the life cycle to include preventive, promotive and curative medical services. This will be done through joint programmes by different ministries to provide comprehensive care for pregnant and lactating mothers and children.

The Nutrition Strategy builds on innovative service delivery models or experiences of various states such as Odisha (Ami Bhi Paribu), Madhya Pradesh (Suposhan and Sneha Shivirs), West Bengal (Keno Parbo Na – Positive Deviance), Chhattisgarh (Nava Jatan) and Maharashtra. These states have demonstrated success in using growth monitoring and promotion as the trigger for ensuring universal coverage and bringing down the level of malnourishment among women and children. The strategy thus promotes the use of such innovative models by other states as well.

Lack of knowledge among mothers and families is often a major reason why timely interventions cannot be made for children. The strategy emphasises on regular growth monitoring, tracked on the family retained card, and on the web-enabled management information system that would make undernourishment visible to health workers, and the same can be communicated to the families. This can then promote early preventive action, improved care and feeding so that the child does not slip into malnutrition.

While the strategy in its current form does look promising, one will have to wait and watch to see its impact on people. India is going through a complex socioeconomic transition, manifested diversely and unevenly in different parts of the country. The gap in addressing undernutrition lies not only in lack of a policy but also in the intent of translating its provisions into programmes backed by budgets. While the strategy is definitely a good first step, it cannot be the only step.