Petrol At Rs 75, Diesel At Rs 68: What Oil Under GST Means For Consumers And Govt; It’s A Win Win 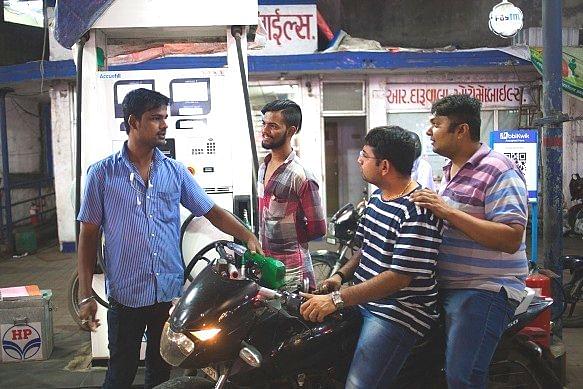 Resentment against the ruling dispensation is growing among Indian public over rising fuel prices as petrol retails around Rs 90 in most states and touching Rs 100 in some. With assembly elections in Assam, West Bengal, Tamil Nadu, Puducherry and Kerala round the corner, the politicians in power are scrambling to come up with a strategy to cut prices and calm the tempers.

Yesterday (4 March), Swarajya argued that the government should immediately roll back excise tax hike of Rs 13 on petrol and Rs 10 on Diesel which it implemented during Covid-19 lockdown last year as global crude oil prices plummeted to $40 per barrel. Now, that these have rebounded and are about to hit $70. Obviously with no cut in taxes, it’s the Indian consumers that are feeling the pinch. So, rolling back the excise tax hike from last year (combined with some cut in VAT by states) can take the petrol price back to mid-70s in rupee terms.

There is another way - to bring petrol and diesel under the purview of Goods and Services Tax (GST), a long pending demand of the supporters of this national indirect and uniform tax regime. One of the major reasons why oil was not included in GST was to provide states, which lost discretion power to raise indirect taxes, some room in case their revenues lagged. Another notable exclusions from the GST regime were electricity and liquor which states still have a say on as far as taxation is concerned.

As oil prices balloon, the demand to include petrol and diesel under GST is again gaining momentum. As per State Bank of India’s Ecowrap report, if both were to be brought under GST then their base price would be Rs 75 and Rs 68 per litre respectively across all states. “At this base price, with multiple simulations Centre & States have a revenue deviation from budget estimates by only Rs 1 lakh crore / 0.4 per cent of GDP after adjusting for the increase in consumption with the intended price cut,” the report states.

Of course, this is based on various assumptions such as crude price being $60/barrel, rupee dollar exchange rate at Rs 73, transportation changes of Rs 7.25 for diesel and Rs 3.82 for petrol, dealer commission of Rs 2.53 for diesel and Rs 3.67 for petrol. The model as proposed by SBI’s economists provide for cess of Rs 30 on petrol and Rs 20 on diesel with equal division between States and Centre. GST rate at 28 per cent (again divided equally) is extra. Now, even if crude price goes up to $75 (which it might in a few days going by current trends), petrol will still retail at Rs 84 under GST as opposed to Rs 90 or Rs 100 in states.

Obviously, the states like Maharashtra, Rajasthan and Maharashtra which have taxed the heck out of oil will be less willing to come under GST for their revenue loss will be bigger than states where VAT is low such as Uttar Pradesh or Delhi. However, they should take solace from the fact that they won’t be the losers as the taxes will be shared equally with the Centre.

For example, take Delhi. Out of odd Rs 90/litre retail price, around Rs 54 goes in form of taxes - Rs 33 to Centre and Rs 21 to state. If price were to fall down to Rs 75 under GST, tax component would be Rs 40 (cess of Rs 30 and GST of Rs 10 at 28 per cent rate). In this, Rs 20 would go to the state government - same as it is getting now. All the loss will be to the Centre. Any increase in taxes (in case crude price fall and taxes are raised) will be a boon for the states’ finances without having to share political ramifications for the same as the blame will be on the central government as that will be seen as the main culprit running the GST show from New Delhi.

Even those states which have taxed oil heavily will lose out less than what the central government would if we were to move to GST regime tomorrow from the present rate structure.

Still, the centre may lose out on the extra easy revenue, it will not be costly on exchequer as the loss would be less than Rs 0.4 per cent of the GDP (combined for both the centre and stages). The political benefits that the reduced oil prices will provide should suffice to make up for that. In addition, the centre can always say that the oil rates are now decided not by the centre but all states as well which represent all political parties. This would help neutralise the issue of oil prices from becoming politicised.

Indian consumers will also be winners, not just in short term due to immediate fall in prices but also in the long run as it will become difficult to raise and cut taxes on a whim because more actors will be involved in the decision making in the GST council. This will bring some stability in the tax structure.

Bringing petrol and diesel under GST is unfinished business of the GST reform as the SBI report states. The Centre must take the lead in convincing the states. It’s a win win for everyone - national and state governments as well as the consumers.