Post DeMo, Migrant Workers Did Not Rush Back To Villages - Here’s The Data 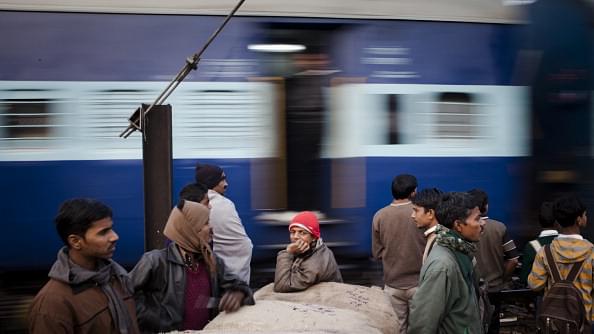 In the last one week, readers were inundated with theories on demonetisation. Most of those are focussed on, naturally, the costs and the benefits, which this piece of monetary action has brought on the economy and the people who constitute those sectors. Most, again has been opinion. A Sunday morning is possibly not the right time to inflict more of the same on the readers of Swarajya.

Instead, one aims to do a fact check. Of railway travel. Of passengers who travel without reservations but with a valid ticket in the general compartment of trains. A preponderant segment of these passengers are those who travel from the labour-rich states of Uttar Pradesh, Bihar, West Bengal and even Orissa and Madhya Pradesh to the industrialised states of western and southern India. Quite a large number of them also travel to Punjab and the canal districts of Rajasthan to work as labourers in the agricultural fields.

Else, we have to assume that even after they lost their jobs, mostly as daily or weekly workers they stayed put. The only reason they might have stayed put is if they got alternative occupation rapidly; else they had clairvoyance and knew that the hardships would be over in two months and they can resume their positions. Plainly, this set of assumptions, seem too heroic. Instead we can safely presume that once they lost their jobs they began to return to their homes.

To assess this line of argument in numbers, let’s check with passenger travel data of the Indian Railways. And the results are surprising.

The railways show their passenger numbers each month broken up into:

For the purpose of this analysis, we look only at the non-PRS (non-suburban) passengers, who comprise (b) (ii). In other words these are the passengers, who travel long distance without reservations forming the core of India’s migration story. How did they move in the days and months, following demonetisation?

Surprisingly, they didn't move. Table I shows the trend in their movement pattern. These are actual numbers as available on the Indian Railways monthly progressive data sheets. In October 2016, there were 261.37 million passengers, who bought tickets for travel in this category. In November, when demonetisation was ordered, the numbers were almost unchanged at 262.38 million. In December, the numbers dipped to 239.65 million. There was no rush of non-PRS ticket purchases across the country as one would have instead expected.

To put these numbers in perspective, one has to compare them with the numbers of the same non-PRS (non-suburban) in the same months of 2015. It turns out that there is absolutely no variation. In fact, they are almost 100 per cent fit on each other. And the close fit continues through the new year 2017 too, as the table shows. Whichever month one may examine, from 2016 and 2017, the data is in lockstep. So, it would seem that whatever demonetisation was doing, it had not made the workers (possibly made jobless due to demonetisation) move out of the towns or cities where they had migrated to, for work. The workers were staying put. And they stayed put even into the new year, right until June. In none of these months has there been any spike in the numbers of non-PRS non-suburban passengers. The fit with the trend of 2015 is almost embarrassing.

But then, it is possible that 2015 and 2016 numbers may have matched as a freak occurrence. One therefore examined the same data for the corresponding months of October, November and December going back to the year 2012. What does that trend show?

This again is bizarre, or not, depending on how one reads the ground situation of the job market prior and post demonetisation. Table 2 shows that there has been no change in the ticket booking pattern by this category of passengers over the years. To put it in other words, the match between 2015 and 2016 is not freak. More or less the same number of economically poor passengers travelled via the railways in every year since 2012. Rather over the years, the number of passengers buying tickets in unreserved coaches and trains has perceptibly gone down. But that is a topic that would need to be explored separately.

There are some caveats here. It is possible that people thrown out of jobs had travelled by bus instead of trains. This is particularly possible if most migration has happened from local villages to local towns. Also, it is possible to conjecture that most of the returning workers travelled without tickets. Both are difficult to sustain. Only if jobs were being created in eastern India, then the first would have seemed plausible. The second one is unfair to the citizens of India and has to be rejected as implausible.

In short, one is left with the surmise that whatever happened post demonetisation, migrant workers did not up-and-leave from their job areas as a response to demonetisation. Facile generalisations to the contrary, would not help.