When It Comes To Automation, Technology, And Jobs, These Are The Thirteen Points Policy Makers Should Keep In Mind 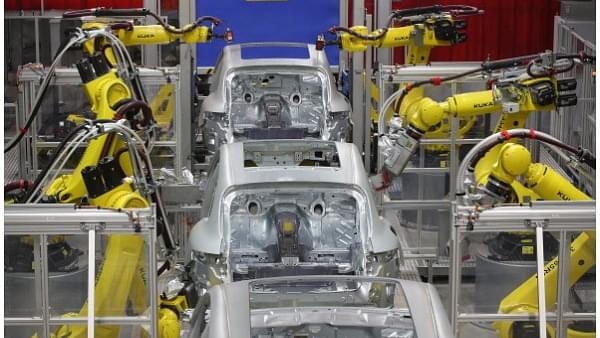 Robots weld the bodies of Porsche Macan SUVs at the new Porsche Macan factory at the Porsche plant on February 11, 2014 in Leipzig, Germany. (Sean Gallup/Getty Images)

This article was first published by Information Technology and Innovation Foundation (ITIF) on its website. You can read the original article here. This piece was republished to highlight the original research, analysis, and commentary produced by the ITIF.

There is considerable interest, if not consternation, about the potential effects of emerging technologies such as robotics and artificial intelligence on employment. There is also considerable confusion about the interaction between automation, technology, and jobs. Here are 13 key points that are important for policymakers to understand about that interaction:

1) Technology-driven automation is central to the process of increasing our living standards. That is because better “tools” allow us to produce more. It is only by producing more that workers can earn more and companies can lower prices, both of which increase living standards.

3) The employment impacts of automation in a particular industry depend on the nature of the industry. Automation lets organisations lower costs and therefore prices. In industries where lower prices don’t lead to significantly more demand for a good or service, automation allows fewer workers to produce the same output. But in industries where lower prices spur more demand, automation allows the same number of workers to produce more output.

4) Automation has differing effects on occupations. Some (such as travel agents) have seen employment declines because of new technology. Others have seen gains, either from increases in standards of living (e.g., because more people can afford to hire childcare workers), or because a new technology creates new occupations directly (e.g., computer scientists).

6) Automation itself does not lead to net job gain. Some jobs will be created making new tools, but the use of new tools will always eliminate more jobs. No organisation invests in automation if the net-present value costs are greater than savings. In other words, if it takes 100 hours of work to build a machine that saves 90 hours of work, no company will adopt it.

7) Automation does not lead to net job loss, either. Even if automation eliminates some of the jobs in a particular industry, it does not reduce jobs in the overall economy. The reason is that no organisation automates unless it saves money, and those savings get passed on to consumers, who in turn use those savings to buy something else. That spending creates jobs in other parts of the economy.

8) Automation increases net welfare even if “good” jobs are automated. Some argue that automation should only be for the 3Ds: dumb, dirty, and dangerous jobs. Clearly, automating undesirable jobs is a double win, because there are fewer bad jobs and overall GDP increases. But automating “good” jobs also is a good thing, because it leads to increases in GDP; the original output still exists, but workers are redeployed to produce new and additional output, so society reaps the benefits of more plentiful goods and services.

9) Limiting automation to protect workers would hurt growth. In some industries where demand doesn’t grow enough from the lower prices automation brings, there will be employment effects. In some cases, workers may be laid off. In other cases, companies may not hire new workers to replace those who leave voluntarily. But either way, there can be fewer jobs in particular industries. It is easy to succumb to the view that we should avoid this outcome at all costs, because it can involve painful dislocation for some workers. But those costs come at considerable benefit to everyone else who enjoys higher living standards than they otherwise would. So, the focus instead should be on easing displaced workers’ transitions into new jobs.

10) The rate of automation will never exceed the rate of compensating job creation. Many fear that the pace of change is increasing too fast, even though there is no evidence that the current or expected rate of technological change and productivity will be higher than historical rates. But even if the rate of automation does increase, there is no reason to expect that concurrent job creation (from lower prices and higher wages) will not keep up, especially if macroeconomic policy is calibrated appropriately.

11) Productivity benefits average workers today just as it always has in the past. It is simply not true that wages have stagnated over the last few decades as productivity has grown. As ITIF, the Congressional Budget Office, and the San Francisco Federal Reserve Bank all have shown, productivity has translated into wage gains, albeit not as much as they should have (because income inequality has increased). But it is simply not true that productivity gains in the last two decades have not produced gains for workers in all income deciles.

12) We do not need universal basic income. In response to hypothetical fears that automation will lead to mass joblessness, some have called for universal basic income (UBI), where the state provides income to all adults, working or not. This is a bad idea. Automation does not raise unemployment rates, but UBI will, because it will both encourage people not to work and divert spending from activities that would create more jobs for people without jobs.

13) Regardless of the rate of technological automation, the United States needs to do more to help workers make transitions between jobs and occupations. The failure to give workers skills and assistance to move into new jobs or occupations not only contributes to higher structural unemployment, but also breeds resistance to innovation and automation.