When Will We Throw Out MGNREGA? 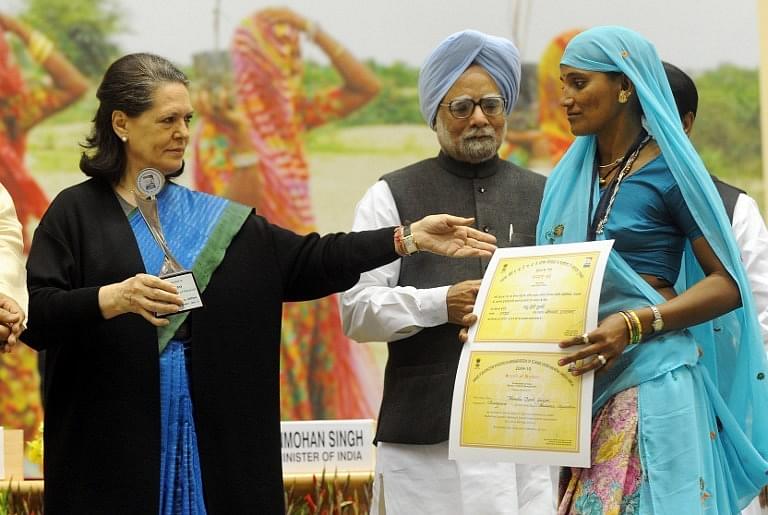 Socialist schemes like MGNREGA are economically illogical, and by definition, misallocate resources and breed corruption. It’s high time it was replaced across the country with direct cash transfers.

Socialist errors generally follow a specific pattern. Socialists pick up what would be a symptom of a healthy economy. They don’t think much about the mechanisms and just try to artificially impose this symptom on the economy through legislation. When the plan fails, they conclude that they didn’t do enough of what they just did, and push for more of the same!

Over the past decade, the Government of India applied the same pattern to governance in India. It resorted to interventions in the economy to ‘create’ jobs. The addition of ‘Mahatma Gandhi’ to the title was supposed to dissuade you from opposing the plan.

Some numbers are hurled at you to convince you of the supposed success of the job scheme. Exactly the same way as Keynesians add increased medical expenditure due to an epidemic to GDP to convince you that the epidemic caused economic growth. Is increased dependence of the poor on Government a statistic to boast about?

Is governmental job creation even a good economic goal?

It’s very important to understand the distinction between a job and a productive job before we try to answer this question. Socialism confuses jobs as an end in itself and, hence, socialist policies generally make society as a whole worse off.

Let’s try to understand the source of this socialist confusion.

A worker with a productive job is providing something of value to another person due to which that person voluntarily returns an agreed equal value to the worker. This generally takes the form of a money payment which can be used by the worker in exchange of resources in the market which are of actual use to him.

What happens when the government provides a higher wage to this worker for a different job? One, the new job proposed by the government is usually less productive for society than the original job because, if it had been more productive, private parties would generally have already employed the worker for this job.

This reduces the total productivity of the economy. Second, since the worker is paid a higher wage, his consumption increases. This is actually a good thing given that most workers are among the poor.

The means employed had a downside―the reduced productivity of the economy. Could we have achieved the same ends without employing these specific means which were a negative contribution to society?

Yes, a direct cash transfer would have produced the same increase in consumption for the poor without the associated reduction in productivity in the economy, and requiring even lower expenditure from government. Let the poor do the same work they were doing earlier and top up their income with some extra cash.

Is it possible for Government to create productive jobs?

That job is more productive whose output is desired higher by society, on the margin. The marginal qualification is essential. Assume a village where the villagers desire 100kg wheat per day and 50kg rice per day.

Without the marginal qualification you might say producing wheat is more productive. But what if the village currently produces 100kg of wheat and 10 kg rice? The more productive job for a new farmer in this case would be to produce rice rather than wheat (ignore demands from nearby villages for the time being).

We have not yet found anything better than a freely floating price signal to tackle this problem.

So can Government better the market in finding productive jobs? Almost never. Precisely because government by its very nature can afford to ignore the price signal.

Critics find a flaw in this reasoning. The criticism which goes as follows is somewhat justified, but it still cannot justify NREGA.

Producing 100 more malaria pills is more productive than producing an iPhone because the former saves human lives whereas the latter just adds entertainment value to a single individual.

But we have seen the market prioritising the latter over the former, as the people most affected by malaria don’t have the money to express their choice to the ‘market god’. Critics call this a market failure even though this failure has its root in governmental failures―governmental policies that exaggerate economic inequalities.

But that’s a discussion for another day. Just for argument’s sake, let’s go with the assumption that this was a market failure. Let’s find ways to solve this problem, but before that let’s look into a few more cases that our solution needs to handle.

The above was a very clear cut case where one choice was clearly better than the other. But what about choosing between building a new room in a school and a new room in a hospital? Or between digging a well and building a toilet? These are much more difficult cases to handle than the simple case above.

The answers will vary depending on innumerable factors and a clear unambiguous judgment is not possible without resorting to the price signal. Can we find a way to make the price signal work for all these cases? Or do we necessarily need the government to make the choice through government-controlled investment?

If we let the  government choose, how will we know if it actually made the right choice? Finally you will have to subject the decision to a market test to know whether it was correct or not. If that is so, why not just give money to the poor and let them make the choices? Their choices will reflect what society actually needs, much better than a bureaucrat’s. They will automatically choose the malaria pills over the iPhones and drive investment in that direction.

A direct cash transfer instead of NREGA or any other governmental investment is much more productive for the poor.

For those who accuse me of assuming that the government can do nothing right, my question remains the same: Propose an objective method of finding whether an economic investment decision by government was right or wrong. How will you apply this method to government’s decisions? I am more than willing to consider answers other than the price mechanism. And reasons why they would be superior.

The resource misallocation effects of NREGA

Every country has limited resources and the way to achieve prosperity is to use its resources in as judicious a way as possible.

When we see Air India planes flying with 25 per cent occupancy, the socialist explains it as an aberration. “If only we could get a more socialist government!” he regrets. A free marketer explains it as a natural result of the incentive structure of the system.

Resource misallocation effects of government programmes are so ubiquitous that we accept them as the normal way things work. NREGA is just one of the many examples. When resources are misallocated, total production in the economy decreases.

NREGA by its very design misallocates labour resources. Socialists want you to believe that this is necessary for achieving equity. Nothing could be farther from the truth. When production in the economy decreases, the hardest hit are the poor because the rich can use savings to maintain their standard of living, but the poor don’t have that option.

The food price rise created due to resources moved out from agriculture to unproductive jobs hit the poor much more than the rich. If you actually care about the poor, your first target should be dismantling NREGA and replacing it with a direct cash transfer scheme.

The corruption effects of NREGA

The corruption in NREGA is not an aberration but a direct result of the incentives built into the system.

Socialists suggest we should appoint more officials who oversee these government officials. They assume the existence of some process to discover honest people who wouldn’t let others be corrupt. But if such a method existed, why don’t we directly apply this method to discover ‘honest’ people to directly manage NREGA?

The idea that creating more bureaucratic levels can decrease corruption is a logical fallacy. Corruption is a natural consequence of the NREGA model; it could not have been otherwise.

The targeting of the poor in NREGA

One positive aspect of NREGA pointed out by its champions is that this scheme has the best targeting mechanism among all other schemes.

Only someone who is really poor will be ready for hard labour for the whole day to earn Rs 100. And this means that NREGA is able to differentiate between those who actually need help and those who don’t.

The moronic destructiveness of Indian socialists is manifested most eloquently in Mani Shankar Aiyar’s arguments. The task of identifying the poor which socialists take upon themselves is a corruption generator and a resource sink. A much better system is time-bound income-independent cash transfers.

The redistributive effects of NREGA

And yes, NREGA results in another positive aspect: some wealth redistribution from rich to poor. This is the actual cause of any benefits seen from NREGA, not the unproductive job.

But these same positive effects could have been created by alternative policies that would have required less government expenditure, with less scope for corruption and minimal misallocation of resources.

The Jan Dhan Yojana from the incumbent Indian government is as close you can get to a sensible governmental policy. This policy must be extended to the whole country to replace all random, unproductive, ‘welfare’ programmes set up by the socialists ruling the country since Independence.

Let me also point out that this writer’s support for Jan Dhan Yojana is not a support for perpetual redistribution. Redistribution has been made necessary in this country due to half a century of socialism that has only benefited the rich  at the expense of the poor. Redistribution should be a time-bound programme just to reverse those injustices.

Gaurav is a software engineer who works for Amazon. Gaurav graduated from IIT Delhi in 2007 with a degree in Mathematics and Computing. He is interested in physics and economics
Get Swarajya in your inbox everyday. Subscribe here.
Tags: