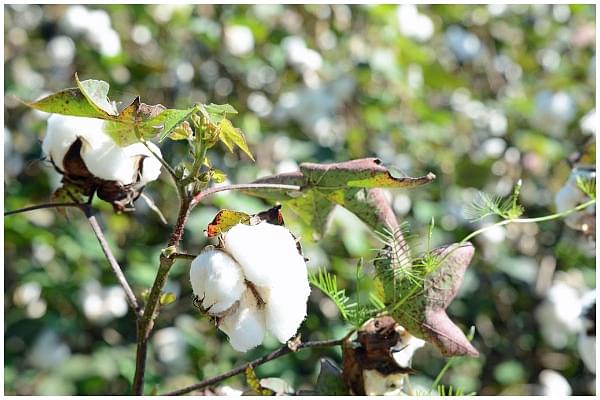 A section of cotton farmers, headed by Maharashtra’s Shetkari Sanghatana, and a group of farmers’ organisations, some of them non-governmental bodies (NGOs), have locked horns over the planting of HTBT (herbicide-tolerant Bacillus Thuringiensis) cotton by growers in some parts of the country.

Reports said that the farmers organisations such as Bharatiya Kisan Sangh, Jatan and Coalition for GM-Free, have threatened nation-wide agitation if the Narendra Modi government doesn’t stop “illegal cultivation” of genetically-modified crops like HTBT cotton. The Hindu Business Line reported that farmers in Maharashtra have vowed to resist attempts to destroy HTBT cotton planted by them.

All these developments only make people curious about what is happening with regard to GM crops in the country. Details made available to Swarajya are interesting. The controversy over cultivation of GM crops began when a farmer in Fatehabad in Haryana was found cultivating Bt brinjal in May this year.

The centre had banned commercial release of Bt brinjal in 2010. But Bt brinjal is being cultivated in neighbouring Bangladesh for the last couple of years. So, it wasn’t surprising that the genetically-modified version of brinjal found its way into India.

According to a leader of a farmer organisation, the Haryana farmer who grew the Bt variety was never aware of transgenic crops. He bought the seeds because he was told that if he grows the variety, he could avoid pest attacks. Brinjal crops are vulnerable to pest attacks that sometimes damage 35-40 per cent of the crop, thus affecting the grower financially.

The Fatehabad farmer reaped quality brinjals, which raised the eyebrows of a few NGOs. They then approached the grower, who innocently shared the seeds he had with them. The NGOs made a global-positioning-system marking of his field and complained to government officials. The crop on his farm was destroyed.

A more interesting development took place on the farm of a cotton grower in Sirsa, Haryana. HTBT cotton on the five-acre farm of the grower was detected by officials, who told him that he was growing it illegally and warned that he could be penalised. The officials convinced him to bring his tractor and pull out the crop on his own.

When neighbouring farmers questioned his action, he told them that he had pulled out his crop on the officials’ instructions. Enraged, the farmers went to the district agriculture department office to question why the officials had forced the grower to pull out his crop.

The officials first denied putting pressure on the farmer but when the farmers produced a close circuit television grab of the officials’ visit to the farm, they relented. In the end, the agriculture department officials offered a compensation of Rs 5 lakh to the cotton farmer. In Haryana, HTBT cotton is being grown in 3-4 per cent of the total area under the fibre crop cultivation.

Last year, an official study revealed that HTBT cotton in Maharashtra was being grown on 15 per cent of the total area under the crop’s cultivation. This year, the area under HTBT cotton cultivation has increased to at least 25 per cent.

In Maharashtra, when the agriculture department officials told the farmers that glyphosate that is sprayed to kill weeds growing on cotton fields causes cancer, the growers asked for proof or data. (HTBT cotton has a glyphosate-resistant gene that helps it survive the spraying of the herbicide glyphosate, which is used to kill weeds.) The growers told the officials that glyphosate was being used for over 30 years world over and no health problem has been reported so far.

On the other hand, farmers insist on growing HTBT cotton because it saves them huge costs on farming. Seeds of HTBT cotton, which is not authorised for commercial sale by the government, are sold at Rs 1,500 for a 450 gm packet. This is higher than the ceiling of Rs 740 per packet fixed for sale of Bollgard cotton II but still farmers go for the costlier option.

Pesticides like glyphosate can be used to kill the weeds but it can also kill the plant. This is why growers go in for manual or mechanical weeding. By opting for HTBT cotton, they save these costs. Also, there is the danger of the cotton plant being plucked during the weeding operations — manually or mechanically.

For example, in Chandrapur district of Maharashtra it is manually tough to remove 80 to 90 per cent of the weed growth. Therefore, many farmers in the district have opted for HTBT cotton making it easy for them to tackle weed growth. The cotton variety has also made plant growth on barren lands possible, they claim.

Farmers also say that they have to pay at least Rs 300 a day to engage labourers on their farms. Besides, the workers have to be given tea and lunch. Farmers are finding the cost of labour on their farm unviable these days. This has naturally led them to seek genetically-modified crops such as HTBT cotton.

In Punjab and Haryana, farmers have begun to demand that they be allowed to grow Bt brinjal since it is resistant to pest attack. Returns are also claimed to be higher.

“It is a symptom of demand and expression of latent need for better technology by farmers. Producers of the seeds are making money but no action has been taken to control them,” Kaundinya told Swarajya. In Andhra Pradesh, cases were filed against 13 seed companies for producing unauthorised seeds but things haven’t progressed beyond that.

“If the government is keen to stop cultivation of HTBT cotton or Bt brinjal, it should control at the producer end. It is easy since they are only a handful of producers,” he says.

Farmers who want to grow GM crops have met senior ministers of the Modi government to represent their case. A senior minister has said that the government would want farmers to have access to better and latest technology. However, its hands have been tied by the Supreme Court.

Farmers argue that a technical committee appointed by the apex court had recommended indefinite moratorium on field trials of GM crops but the views of a key technical expert of the committee were not taken into account. The Supreme Court has left the issue hanging and the government should act in the interest of the growers.

For now, the issue is hanging fire with the concerned parties looking to the centre for clues.