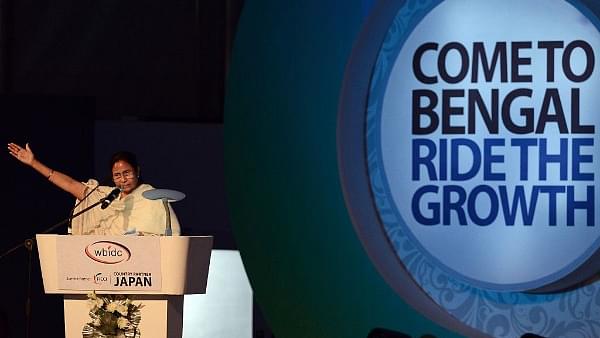 There is a fundamental truth that has been eluding successive rulers of Bengal: it will take much more than words, promises and roadshows to attract investments into the state. The recently-concluded trip of Bengal Chief Minister Mamata Banerjee to Rome and Munich to scout for investments, which came a cropper, has proved this fundamental truth once again.

The biggest roadblock to investments that Bengal faces is its image. To the rest of the world, Bengal is a state beset with poverty, unemployment, disease, social strife, political violence, industrial discord, militant trade unionism, a heavily politicised bureaucracy and police force, and poor infrastructure. Add to that the anti-industry image that the erstwhile communist rulers of Bengal, and then Mamata Banerjee after them, have so assiduously cultivated to gain cheap populism.

So, Mamata, in her crumpled cotton saree, bathroom slippers and unkempt look going to the fat cats of industry and commerce in Rome and Munich to ask for investments was bound to be a failed mission (as had been predicted earlier). All she had to show at the end of the five-day visit as the head of a huge delegation comprising the industry minister, bureaucrats and 29 industrialists and corporate honchos from Bengal were two modest MoUs signed between private players, and maybe no thanks to her at all.

While Mamata was in the Vatican celebrating the farcical sainthood conferred on Mother Teresa, her industry minister Amit Mitra, bureaucrats and the business delegation spent three hours at the Bayerische Motoren Werke (BMW) plant near Munich doing what tourists do – take a guided tour of the BMW plant and museum. Mitra implied after the visit to the BMW plant that BMW would be interested in Bengal.

Turns out that there was absolutely no truth in Mitra’s implication. A BMW spokesperson said later that the company’s plant in Chennai had a lot of spare capacity and there was no question of setting up a second plant anywhere in India.

And in what ought to be doubly embarrassing for Mitra and the state’s bureaucrats, the BMW spokesperson said it was routine for the company to host not only tourists but also delegations of public representatives and officials from Indian states for plant visits. He said the BMW plant near Munich had hosted similar delegations from Kerala, Maharashtra, Bihar and several Indian states in the recent past.

Mamata got a chance to address representatives of German manufacturing companies – she claims 160 German companies sent their top executives to meet her, but this figure is not verifiable and, given Mamata’s penchant for taking liberties with the truth, needs to be taken with a large dose of salt.

At that meet, she made the usual appeal for investments and showcased Bengal as the gateway to the East and Southeast Asia. An auto manufacturer in Bengal could easily explore markets in Nepal, Bangladesh, Bhutan and Thailand, she said. What was supremely ironical was that at the meet, she urged the Tatas to set up an automobile manufacturing plant in Bengal!

No Homework Before Visit

It is quite apparent that Mamata had not done any homework before her visit. Had she done so, she would have asked her minister and officials to meet smaller German car manufacturers like Alpina, Apal, Borgward, Smart, CityEl, Jetcar and some others that are yet to set foot in India.

Companies like BMW, Mercedes-Benz, Audi and Volkswagen manufacture only high-end cars and already have assembly plants in India. And their sales volumes – only 36,000 units of BMWs, Mercedes, Audis, Jaguar Land Rovers and Volvos was sold in India last year – do not justify setting up more assembly plants in India. While Bangladesh, Nepal and Bhutan are hardly any attractive and prospective high-growth markets for these automobile giants, manufacturers of smaller and cheaper cars could be interested in these markets.

The stigma of Singur still persists and, by taking the name of the Tatas at Munich, Mamata brought back memories of her stir that drove the Tata small car project out of Bengal. The invitation to Tatas to set up a car plant in Bengal (after having driven them out of Bengal earlier, which made the global news) was not only supremely ironical but should have been avoided. By doing so, she only rekindled memories of her high-volume, anti-land acquisition stir that sounded the death knell for the Tata car project in Bengal. Mamata’s infamous “ta-ta bye bye” remark (after Ratan Tata announced his decision to pull out of Bengal in September 2008) with a victorious smile on her face made news across the world and is still fresh in the minds of those who matter in industry and commerce.

Mamata and her Marxist predecessors (who were, anyway, responsible for the flight of industry from the state) fail to realise that Bengal is far from investor-friendly. Hosting business summits and travelling to other states of the country and countries around the world inviting investors to come to Bengal does not make the state investor-friendly.

There is a deep-seated antipathy towards industry and commerce in the psyche of the people brought about by decades of communist propaganda against private capital. Though Goddess Lakshmi is widely worshipped in Bengali households, most Bengalis harbour animosity towards, if not suspicion of, the wealthy. This psyche makes Bengal anti-industry, as was evident from the enthusiastic acclaim Mamata received (which translated into an electoral tsunami for her in 2011) when she bid goodbye to the Tata small car factory at Singur.

Bengal’s leadership needs to work on this and bring about the much-needed attitudinal change amongst the people of the state. Bengal’s masses have to be made to realise that industry will provide them jobs and improve their financial lot, and hence, private capital and industrialists should be warmly welcomed.

The ground reality in Bengal today is that investors have to face innumerable hurdles posed by the petty and mid-level bureaucracy (which is still steeped in the culture of the licence-permit raj), and this despite tall promises made by the state leadership about single-window clearances and fast-tracking approvals.

Acquiring land is a major problem and, despite Mamata’s repeated assurances that land is available with the state government, the fact is that these are only small parcels of land that will not be suitable for large industrial units. Investors venturing to acquire land on their own face many hurdles and impossible demands from landowners that ultimately drive them away.

After crossing all these hurdles, the hassled investor has to face Bengal’s notorious syndicate raj. This extortionist setup presided over by Trinamool leaders causes more losses and delays and is enough for any investor to flee the state. Add to this the deeply politicised bureaucracy, police and the state’s polity, and the resultant political interference that the investor has to put up with.

The militant trade unionism patronised by the communists, who also made it passe for the state’s workforce and petty bureaucracy to shirk work as long as they stayed on the right side of the political fence, has resulted in Bengal’s infamous work culture. Even today, workers in industrial units and other private enterprises are lazy, inefficient and resist any attempts to discipline them; local politicians intercede on behalf of workers if any attempt is made to make workers work hard.

The flight of capital from Bengal from the early 1960s (the direct result of the rise of Naxalite and communist-sponsored militant trade unionism and anarchy) was followed closely by the flight of intellectual capital, which continues to this day. Bengal’s brightest and best still choose to leave the state for greener pastures in the rest of the country and abroad. Thus, the talent pool available in Bengal is very limited and the quality of available human capital very poor.

Again, despite Mamata’s claim in Munich, large parts of Bengal continue to be hobbled by poor infrastructure. Rural connectivity has, admittedly, improved under Mamata’s stewardship, but still lags far behind that of other states. Most of the highways and bridges are in a dilapidated state and the state does not have enough funds to improve them. And politically-controlled cartels of transporters make things doubly difficult.

Bengal has just two urban centres – Kolkata and Asansol – and the quality of life in the two is nothing compared to what other cities across the country can offer. This is a major deterrence to industry. Good educational institutions, healthcare facilities, hotels, etc., are a pre-condition for major investments and Bengal has little to offer on this.

Mamata has to address these vital issues before she turns her attention to inviting investors to Bengal. Many who have come to Bengal have had very bitter experiences and have pulled out without putting their money in the state. The ones who invested have sorry tales to tell. Mamata will be naive to think that their experiences in Bengal will not influence other potential investors.

Whether she admits it or not, the bitter experience of Ratan Tata in Bengal will continue to make potential investors extremely wary of coming to Bengal. Tata Motors had planned to set up their small-car factory at Pantnagar in Uttarakhand, but (then chief minister) Buddhadeb Bhattacharjee prevailed on Ratan Tata to shift the plant to Bengal by offering a host of incentives. The senior management of Tata Motors was sceptical and unenthusiastic about bringing the project to Bengal, but Ratan Tata said he took a “leap of faith” to invest in Bengal. That faith, as subsequent events proved, was grossly misplaced.

Mamata and her ministers, therefore, need to go to Ranaghat and Mathabhanga, instead of Rome and Munich, to do the groundwork and make Bengal an attractive place for investors. They need to bring about an attitudinal change among the people of the state towards private capital, drastically improve the work culture of Bengal, improve the state’s physical and social infrastructure, depoliticise the state’s polity and ban political interference in private industry and enterprises before they start scouting for investments.

And for good measure, they, especially Mamata, should own up and apologise for driving the Tata small car project out of Bengal. She would do well to pay Ratan Tata a visit and urge him to let bygones be bygones. Imagine what a powerful message it would send to potential investors if she poses with a beaming Ratan Tata before the cameras! Making this amend would allow her to shed her anti-industry image. And only then would major investors dare to take another leap of faith and come to Bengal.