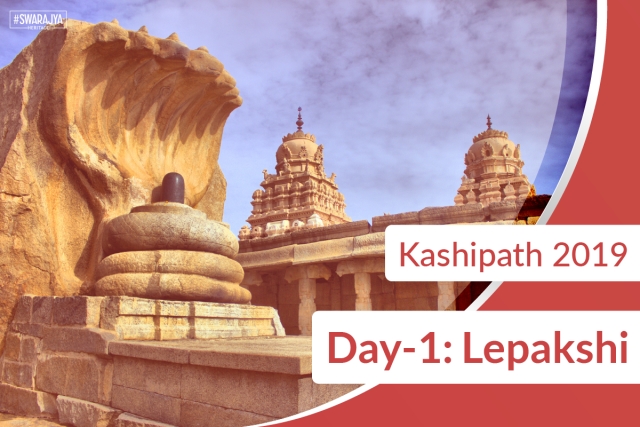 Siva Lingam inside the main temple beautifully curved out on a rock. (Ranju.barman/Wikipedia)

Almost two years and six months ago, when Amar Govindarajan asked a few colleagues and me at Swarajya if we would like to participate in a trip from Bangalore to Banaras, it did look great and exciting. Everyone answered in the affirmative. Then came a WhatsApp group ‘Bangalore to Banaras’.

What detailed planning! And then, every six months, we would say like the Jew in exile yearning for Jerusalem, in the end of next six months, we shall be at Banaras. Every time there was a hurdle of some kind. It was almost like the trip would never happen. Slowly it was becoming a kind of whispered office joke –‘surely not like the famous Banaras trip. Right?’

Naturally, one could understand the joy and excitement when it became plain that the trip was going to happen. The subject expert was ready, the car was ready and we were all ready. Exactly on the day we were to start, the subject expert gets typhoid and gets admitted in hospital and another one gets a message that his uncle was on his death bed. “You cannot go to Kashi with your uncle so serious,” said a socially-conscious well-wisher.

So again, it was postponed. At the office, colleagues looked at us as if we were kids whose Deepavali had been just cancelled.

So now, you can realise how excited we were when at last Karan Kamble broke the coconut in front of the Siva-Gayatri temple at Bangalore. The car was ready. Everyone was ready. Jones with his characteristic indomitable spirit, who was recording our entire trip, was hyper-ready.

Amar was in his dhoti — a bit surrealistic and hence, had to check again if the whole trip was really happening or it was just a great grand dream.

Then the car had already started and the first stop was Lepakshi.

To book an affordable airport cab in and around Bangalore, use Savaari Car Rentals.

In India, we have in every village a story — history and purana, local traditions and epic memories combine and create a realm of their own. One can say, it is a kind of sacred time and space. You can use the tools of modern history — writing and research — only that much and no further.

Lepakshi is no different.

As the neat road ends and the dust and gravel road bends and gets you into Lepakshi, on a small hillock, you can see the statue of a big eagle with wings spread. The local legend is that Jataayu, who tried to stop Ravana from abducting Sita, was mortally wounded and fell down here. Rama seeing Jataayu lying down wounded called it lovingly, ‘Le Pakshi’ which meant ‘Arise O Bird’.

So here on the hillock, they have installed a statue of an eagle with its wings wide open. It does not matter to anyone, if it really happened. To the Indian mind, Jataayu symbolises the righteous fight one should engage in even if odds are against oneself.

It is better to fall in the battle for Dharma, for defending the helpless and subjugated, than to go indifferent.

The last rites of the bird chieftain was done by Rama Himself, with the same love a son would show for a father. So, it is natural that such a name is desired by the collective mind of the people for their own place.

The day we went was a Sunday and there was quite a crowd. The soda vendor standing at the entrance informed us that this was how it was every Sunday. The temple, one should say, is well maintained, particularly by Tamil Nadu standards. For such a crowd with children, families, elderly and tourists, the place was almost free of litter.

As we enter the temple, what strikes one are the pillars exquisitely carved. Initially, they looked mostly like any pillars in a village temple.

But as one progresses and starts seeing the details, one cannot but wonder at the marvel of what a twitter handle has called ‘unmatched ability of Hindu chisel’.

The pillars have a great number of elephants and Nandi — the bull mount of Siva. One wonders if the place around abounded with elephants. Usually, the elephants are shown pulling a tree. The sculptor had captured the speed of the elephants in his chisel quite successfully.

As we move inside, we see a lot of pillars. To call them beautiful would be a terrible understatement and injustice. But they are incomplete. There is a story behind these incomplete yet exquisite pillars lying there. It is a story very similar to the events in the lives of Saivaite saints Manichavachagar and Bhadrachalam Ramadasu.

The chieftains, Veeranna and Virupanna, had built this temple during the Vijayanagar period. The emperor then was Achutadeva Raya.

For building this specific structure called Kalyana Mandapa — for Siva — Virupanna utilised the money due to the royal exchequer. When the emperor came to know, he was infuriated.

He stopped the construction work. Virupanna became so pained that he plucked out his own eye and threw it, and to this day, this eye has left its mark in the temple — a crimson red eye-like mark does exist and is said to shed blood-like drops on special occasions.

Unlike the events in the lives of Manichavachagar and Bhadrachalam Ramadasar, who too used state funds for temple-building, here we do not have exactly a happy ending. And the village got its name from this gory event — ‘lepa akshi’ — blinded eye.

The temple is filled with sculptural wonders. The pillars contain the sculptures of various forms of Siva, including an extremely beautiful one in which Siva is holding the hand of Parvati, with Narada adoring the divine couple.

This sculpture, now part of the unfinished hall, accentuates the tragedy of Viruppanna even more.

Inside the temple, the ceiling is rich with murals that are beautiful and fast disappearing. Notice these marvellous murals on the ceiling when you go there, please.

Apart from the beauty and sense of loss these fast disappearing murals evoke in you, also notice that they have depicted divine characters in every possible skin tone.

The Hindu painters of 15th and 16th centuries do not seem to have a concept of skin colour-related superiority or inferiority.

Remember that Vijayanagar had relations and interactions with Portuguese and hence knew about the different races and skin colours.

But that had not become part of their worldview. Today, this has to be emphasised.

In the outer wall leading to the sanctum sanctorum, there is, perhaps, the most detailed panel series describing Arjuna going for penance towards Siva.

Indra, Arjuna’s father, tests his son’s steadfastness and after getting convinced, asks him to do Tapas with the aim of getting the Pasupatastra from Siva — the weapon of Siva which is more powerful than the Brahmastra.

Then incited by Duryodhana, Muhasura comes in the form of the boar.

Simultaneously, Siva also appears on the scene as a tribal, with Parvati as his consort. He also shoots an arrow at the boar, even as Arjuna shoots his. This results in a fight for credit. And at last, Arjuna realises who really has come and subsequently, Siva blesses him with his Pasupatastra.

One wonders why our culture and religion — often described as ‘Brahminical’ —should make a Kshatriya prince wrestle with Siva as a tribal chieftain and then sing that repeatedly in ballads, epics, village songs, legends and sculptures.

Kirataarjuneeyam is a delightful pan-Hindu theme literally till the very southernmost end of the Indian mainland.

Almost in every Indian district, one can see a village associated with this event. The artificial division of ‘Brahminical’ and ‘tribal’ is thus refuted in the very soul of this nation and we with our imported binary constructs seldom look around us.

The four hours we spent at this temple do no justice to what the temple has to offer. A minimum of two days you must spend at this temple and wholeheartedly ingest every cultural offering that constitutes its sculptures, murals and the atmosphere.

Inside though is the dominant deity — Veera Bhadra or Siva, who is also called Papanasheshwara — a name very familiar to the Tamil people. There is also a Ramalinga and Hanuman Linga — reminding one of the Sthalapurana associated with Rameswaram.

Sure enough. there is a Raghunatha inside too. I wonder how a person from Lepakshi town would feel when he comes to Kuttralam and hears about ‘Papanasam’ with its Siva temple.

And then, one realises that this is how India is constantly getting united. Through all her naturally evolved diversities and artificially imposed conflicts, this strand of unity runs.

And at every village temple, perhaps, this unity is getting forged at deeper levels of our collective Indian being.

As I said, this temple is well maintained compared to Tamil Nadu temples. However, the temple is also losing on a fast track the treasures it contains — namely the mural paintings.

We need to provide every visitor the sense of the sacred respect they should have for their heritage and sculptures.

The famous Nagalinga has been converted into a selfie spot. It is a sculpture that should invoke the dissolution of the self and not evoke the lust for a selfie. But when the sense of the sacred, culture and history are not properly disseminated, then narcissistic behaviours like selfie-taking manifest.

Another fact we observed was that everyone comes and feels the Naga linga. It is a natural impulse, perhaps — but not exactly good in the long run (not in the ritualistic sense) for the sculptures are already exposed to the elements.

The visitors — who may include both casual visitors and also devotees — should be directed to adhere to strict protocol and be told how to behave inside the temple. Taking photos should be done with a sense of reverence that these sculptures deserve.

That is the least we can do to the blinded eye that still bleeds at Lepakshi.

We then get into the car and move on. Some of us are simply unwilling to leave. In the car, we speak about how simple ideas such as audio guides, brochures with pictures and free guides can help make the temple experience so much more richer for the visitor.

After a lunch stopover in Penukonda, we set out for Hampi. It was already 4 PM when we left Penukonda and it will likely be around 10 PM when we retire at Hampi. Day One of Kashipath 2019 was fantastic. See you from Hampi tomorrow.