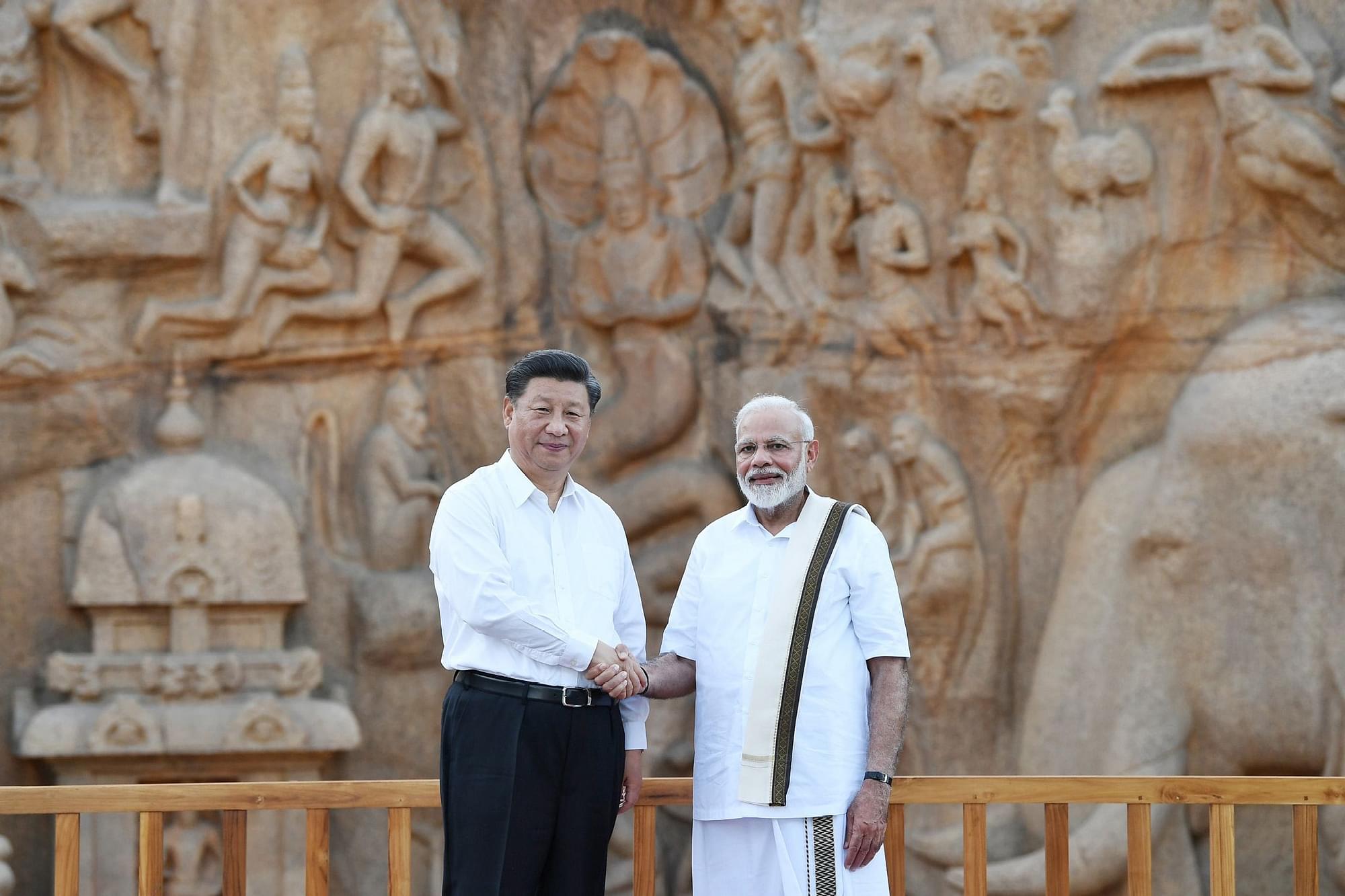 Modi with Xi in Mamallapuram.

With Xi, he stood before Arjuna's Penance, the Pancharathas, Krishna's Butterball, the Ganesha Ratha and the iconic Shore Temple, turning his attention to the UNESCO World Heritage site in Tamil Nadu. Modi was seen graciously explaining the different episodes depicted on these sculptures to the Chinese leader.

In the process, Modi was also unrolling a calendar of a mighty civilisation — as if nudging Xi into noticing that we, too, go back that far in our cultural evolution and its many facets.

For many world leaders such as Xi, Indian antiquity remains a hidden as well as a shy glowing jewel, during their state visits to India. So measured and restricted the road to celebrating Indian soft power has been during several bilateral interactions between India and world leaders before Modi arrived in Delhi, that the national capital became its starting point and Agra, the finish line.

Taj Mahal, the marvellous monument, can be approached via the butter smooth expressway from Delhi and Lucknow. Ironically, Fatehpur Sikri and Delhi's Humayun's Tomb remained largely ignored. The coming up of the Delhi-Agra Expressway was celebrated as if it were the only passage to India.

At the same time, UNESCO World Heritage architectural sites in other states remained obsessively backstage and severed from the visual narrative in India's interaction with the global audience at these bilateral meetings.

Modi is clearly upholding heritage and venues that have not been seen by the world leaders. He is looking beyond Agra and Taj.

In 2016, Modi paid obeisance at the Golden Temple, the holiest of Sikh shrines, with Afghan President Ashraf Ghani.

In 2015, Shinzo Abe witnessed the world famous Ganga aarti in Benaras with Modi.

In 2017, Abe visited the Sidi Saiyyed Mosque in Ahmedabad, Gujarat.

Modi invited South Korea's First Lady, Kim Jung-sook to India. He met her in Delhi, and later, she travelled to Ayodhya for Uttar Pradesh Chief Minister Yogi Adityanath's Deepotsav — the festival of lights.

For this author, this jugalbandi between Modi and Adityanath was a perfect display of innovation in thinking about bilateral and people-to-people ties between Delhi and a state. Even though Modi himself was not present in Ayodhya, Adityanath's event in honour of South Korea, its people and the first lady herself, spoke of their combined power to send out a message for people of both nations.

In 2016, former French president Francois Hollande began his India visit in Chandigarh. Modi and Hollande also met at the Rock Garden — a modern depiction of art from rubble and waste in the garden city.

In Mamallapuram, for Xi, Modi stirred several elements into his storytelling. These included traditional percussion instruments, the sound of the ancient stringed instruments, classical dance forms, textile and food. The port city of Quanzhou in China's Fujian Province on its east coast found mention from both world leaders.

There was a subtle message from Modi which was not meant so much for Xi. It was meant for Indians. It was that we are what we preserve, and with that we must preserve the storytelling of our great civilisation.

Now, here is what would happen in the days of the Taj. Delhi's old media, what is known as the Lutyens' Delhi media, today, would line up to present Taj as the hero of the bilateral meet. One wide view of the entrance to the main site.

A bunch of general shots of the guest at the bench with Taj in the backdrop. Then a close up of him with the first lady, sitting down, standing, walking, smiling. Long view and short view of the monument. Lots of glare falling back from the white marble in broad daylight. Lots of push and shove to get the right — love in Agra shot. Over.

It is heritage we are proud of, but still, at times, hesitant to embrace as Indic. Some remnants of history in red sandstone and white marble are gifts from transgressors. They are stately, but lack warmth. They are picture perfect and flattering, but there is barely a depiction of lives the common man, the sculptor, the forms the men and women worshipped, loved and romanced passionately.

The Moving Caravan Of Power

Modi's step is an exercise in legitimisation of Indic diversity, which did not need legitimising in the first place, but was given the same treatment that Hindu architecture got in India's global outreach before he arrived in Delhi.

The following points about his outreach become increasingly distinct.

One: There is a sense of deep engagement in Modi's interaction with the world leaders against a new background or backdrop every time. Modi gives the guest his own space to respond to the venue.

In Varanasi, Abe stood next to Modi on the ghats rolling up his sleeve for the tying of kalaawa on his wrist, as if he was used to it. This, he did, while staring across the breadth of the river in thoughtfulness. Modi doesn't have to always guide the guest. People-to-people contact begins here.

Modi has gone out of his way to establish confidence in the people of the venue city, their values, tradition and culture by placing the informal baithak amidst them. A good example is his visits with Abe and Xi to Ahmedabad.

Two: This is leading to the broadening of the bandwidth to build the language. By choosing sites outside Delhi, Modi makes it clear that to build a new language, and to widen and deepen vocabulary, he needs a broader canvas and some common ground.

Xi was seen poring over animal motifs, pillars, and visual stories in Mamallapuram and looking for his own there.

Three: Modi breaks his own comfort zone — it involves risks — but he goes ahead. This way, he makes the local administration and authorities break their own comfort zones. It launches a new chapter in improvement, preparedness, better work, new ideas, feedback, the cycle. All this goes ultimately into raising a pitch for tourism and renewing and strengthening work undertaken by the dedicated local authorities.

Reverse dialogue. Mahabalipuram is seated in a state that is not his political comfort zone. His visits to the state previously, as this time, have produced reactionary eruptions from his opponents. Modi doesn't want India to remain defined by the safe zone of Delhi-Agra. He breaks visual ice. He resets the visual vocabulary.

Four: Modi has displayed a penchant for causing disruption in the cultural narrative in the domestic and Asian context. He has rethought the celebration of ties in Asian and global politics by focussing on different figures and chapters in Indian or common history, tradition or legends.

Five: Modi has established and expressed his faith and confidence in celebrating the cultural legacy and architectural heritage of cities he chooses for his samvaad with global leaders. The purpose is to improve ties — or deepening friendship in all aspects of partnership. The guests get aspects to associate with, which are of great value to people in their home nation.

Let's just take Xi's interactions and the role played by the different elements. The charkha at Sabarmati Ashram, the pretty Guajarati parasol he held, the swing he sat on, the folk songs that surrounded them — are all civilisational elements. In Mamallapuram: the performances from Kalakshetra students he witnessed, the monolith sculptural wonders he saw, the stories on the caves and the Pancharathas, the woven silk he held, the food offered to him in Mahabalipuram. All these go into building a new language of elements and facets.

Seven: The use of water as a gentle metaphor of continuity in journeys and travels and relationships is a valuable takeaway from Modi's getaways with his guests. They keep the conversation flowing.

In Gujarat, Xi sat on the swing next to Sabarmati riverfront. Abe's soul was touched by Shiva's Ganga and the aarti performed for her. The Wuhan Spirit unravelled the East Lake — the largest freshwater urban lake in Wuhan. Then, the Bay of Bengal, which was the path of the Pallavas to China, formed the backdrop along with the Shore Temple in reciprocation to the Wuhan Spirit. More rivers and two more oceans wait.

Eight: It is redefining India's character in the subcontinent. Agra was bundling up India's cultural image to only one aspect of history. It was stereotyping India's soft power outlook. Worse, too much obsession with Agra was not allowing India to look east and south east. The key to future relations for India, as is for many countries moving towards India in Modi raj, lies in many histories and local histories. We must not deny them what they relate with — as it would be cultural stuntedness.

Nine: Modi is not selling a dream for India's tourism industry. He rolled a ball of real ideas wrapped in existing heritage towards ministries that can work towards this cultural realignment, back in 2014. The footfall to Mamallapuram after Xi-Modi meet is not surprising. Incredible India is a wonderful campaign which needed the walking of the talk. Modi has pulled it out from the shut idiot box and radio.

Ten: Modi's exercise is a powerful tool for empowering national integration. He must dedicate it to Sardar Patel and widen it to celebrate the living histories and cultural aspects of Sikhism, Jainism, Buddhism and Zoroastrianism at chosen venues.

When Modi is able to achieve this, he would have put to use every trinket of his understanding of culture and travels as a common man. Looking beyond Delhi and Agra for his interactions as a world leader could just be a beginning towards it.