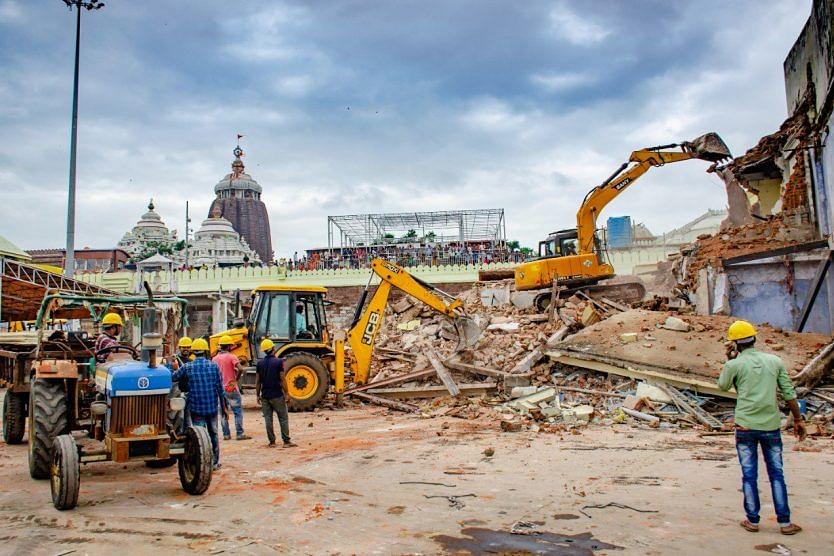 The temple town of Puri, the seat of Bhagwan Jagannath, is often referred to as ‘Srikhetra’. But today, as senior Bharatiya Janata Party (BJP) leader Bijoy Mahapatra rightly puts it, Puri resembles a ‘Kurukshetra’. The grand temple to Bhagwan Jagannath stands forlornly surrounded by acres of rubble.

Underneath that rubble lies centuries of destroyed history and heritage. It is not just age-old buildings, but sacred rituals and traditions closely associated with Jagannath Dham, which have been reduced to ungainly mounds of broken bricks and mortar. All thanks to an ill-advised demolition drive ordered by Odisha’s Naveen Patnaik government

The ostensible reason for the drive is a vague terror threat. Patnaik, holding out a specious rationale for the demolitions, had said on the eve of the drive launched late last month: “terror groups are targeting religious institutions. So it is imperative to implement various security-related suggestions in the temple”.

He, however, failed to specify the threats and why so many centuries-old structures closely linked to Jagannath Dham need to be demolished.

The drive started on 27 August and is aimed at clearing a 75-metre radius around the main temple of all structures.

“We want this area cleared of all buildings, many of which are illegal, to facilitate strict vigil and prevent a terror attack. Since there are many structures adjacent to the main temple, it would have been very easy for terrorists to launch an attack on the temple,” said Puri district collector Balwant Singh.

The state government is relying on a contested and controversial report by a commission headed by retired Justice B P Das. The report, which has not been made public, reportedly recommends the clearing of a 75-metre radius around the Jagannath temple of all structures. The state cabinet approved the report in August.

As per this plan, 18 of the 70-odd mutts around the Jagannath temple will be demolished (three of them have already been reduced to rubble). Hundreds of shops and commercial establishments which have encroached illegally into the mutts are also being demolished.

But there is no clarity on why the Das Commission decided on creating an open space of 75-metre around the main temple and not anything less or more. Structures owned by many influential people, including the Gajapati of Puri, lie a little beyond the 75-metre radius.

Another justification held out by the state government for demolishing the mutts, commercial establishments and 600-odd dwellings is that most of them are unsafe and pose a threat to the lives of their inhabitants and pilgrims, who flock to the temple town. But conservationists and others contest this and say that in the case of heritage structures, efforts ought to be made to strengthen and preserve them instead of demolishing them

They cite the instance of the Bada Akhada Mutt, which has already been demolished. The terrace of the mutt had been used every year as a viewing gallery for VVIPs during the famous Rath Yatra. If the mutt is unsafe, how is it that its terrace was being used to seat VVIPs, including top politicians, bureaucrats and judges, during the Rah Yatra, they ask.

The state government’s unilateral decision to undertake the controversial demolition drive, dubbed by many as Tughlaqi farman (in reference to Muhhamad-bin-Tughlaq’s ill-advised move to shift his capital from Delhi to Daulatabad), has been opposed by many.

The opacity of the drive has angered and distressed many.

“The B P Das Commission report has not been tabled in the state assembly or made public. The government does not have any constitutional or legal rights to demolish heritage structures. There is a much larger conspiracy behind this,” said BJP’s Mohapatra.

Conservationist Anil Dhir says that not only was the Das Commission report not made public, no blueprint was also drawn up and a rehabilitation package was also not drawn up before the demolitions started. He likens the demolitions to the destruction of the Bamiyan statues by the Taliban in Afghanistan.

Shankaracharya of Govardhan Peeth, Swami Nischalananda Saraswati, has opposed the demolition of the mutts.

“The recommendations of the Das Commission are illegal. I was never consulted. The state government cannot decide on such matters unilaterally,” said the Shankaracharya.

The heads (mahants or mathadhipatis) of 13 mutts have written to the Chief Justice of India seeking his intervention in halting the demolitions.

The mutts (or mathas) of Puri are unlike those in the rest of the country. Puri’s mutts have immense cultural and religious significance and have an integral and symbiotic relationship with the Jagannath temple.

Highly revered religious figures like Guru Nanak, Ramanujacharya, Jayadeva, Nimbarkacharya, Madhavacharya, prominent seers of the Dasanami Sampradaya, Ramanandacharya, Vishnu Swami and Vallabhacharya, among many others, were associated with and had set up many of the mutts in Puri.

Ramdas, the spiritual guru of Chatrapati Shivaji, established the Ramdas Mutt while the Kabir Chaura Mutt is named after Sant Kabir because he stayed there during his visit to Puri.

Every mutt is associated with the Jagannath temple very closely and is tasked to perform many rituals of the temple (read this and this).

“The demolished Emar Mutt had to prepare bhog for Bhagwan Jagannath for a period of two weeks after his return to the mandir after the annual Rath Yatra. The Emar Mutt had huge granaries from where grains were supplied to the poor. The Emar Mutt fed thousands for free every day during the Orissa famine of 1866. In fact, the mutt supplied foodgrains to the British in exchange for bullion in the form of silver bars,” said Anil Dhir, who has researched and written extensively on the mutts (read this on Guru Nanak composing the Sikh Arti during His visit to Jagannath temple).

In order to enable the mutts perform their duties towards the Jagannath temple, they were given land grants. The revenues from these lands enabled them to meet their expenses. It is estimated that the mutts were in possession of 1.75 lakh hectares of land in 1947, but most have been encroached upon and the remaining were taken over by the state government through the Orissa Hindu Religious Endowments Act, 1951.

“The mutts used to serve as centres for imparting religious and spiritual training, as educational institutions and as cultural centres. Many used to run schools and health centres, and used to feed and house the poor. Poor pilgrims have also been staying in the mutts. But starved of their sources of income, most of them had to stop all these religious, social, educational and charitable activities,” said Sai Deepak, legal mentor of Indic Collective Trust.

The trust has petitioned the Supreme Court for a halt to the demolitions.

Odisha state convenor of Indian National Trust for Art And Cultural Heritage (INTACH), Amiya Bhushan Tripathi, says: “mutts have sacred significance and are an integral part of Jagannath culture. These mutts have a symbiotic relationship with the mandir and the deities, and have important roles to play in the daily ceremonies and annual rituals, including the Rath Yatra. Mindlessly demolishing them is sacrilegious and a blow to the history and heritage of ‘Purushottam Kshetra’ (as Puri is often referred to). The government should have preserved this priceless heritage,” said Tripathi.

The first mutt to be demolished was the Languli Mutt of the Naga sect. Immediately after that, the twelfth century Emar Mutt was demolished. The Emar Mutt was associated with Ramanujacharya, whose disciple — Srinivasacharya — established the mutt.

The Emar Mutt also houses the centuries old and famous Raghunandan Library, which was the repository of over 44,000 ancient and rare books and 3,000 palm leaf manuscripts.

“But thanks to government apathy, only 4,000 of these books and 170 palm leaf manuscripts remain. The library has been demolished, and though the state government has announced plans to set up a new library, it can never be the same as the heritage library inside the old Emar Mutt,” said historian Dhir.

After these two mutts, the government’s cruel blows fell on fourteenth century Bada Akhada Mutt. This mutt, ironically, was set up by Ramamnada to train ascetics in the use of arms and martial arts to defend the Jagannath temple from Islamic invaders. The Bada Akhada Mutt housed many Naga sadhus and was an important spiritual centre. Next on the state administration’s list are the Mangu Mutt and the Punjabi Mutt.

Both the Mangu and Punjabi Mutts have spiritual significance for Sikhs. The Mangu Mutt was established by Bhai Almast, a Sikh preacher and head of the Udasi sect who had been deputed to the eastern provinces by Baba Guruditta, the eldest son of Guru Hargobind, to preach the message of Guru Nanak.

Tens of thousands of Sikhs visit the Jagannath temple every year, especially during the Rath Yatra, and stay in these two mutts. The Mangu Mutt sheltered many freedom fighters and its mahant was granted the right of the ‘Mayur Pankhi Seva’ of Bhagwan Jagannath.

The proposed demolition of these two mutts invited intervention by Punjab Chief Minister Amarinder Singh, who has been assured by the state government that the heritage structures would not be harmed.

“But that is a false assurance. Amarinder Singh intervened after I wrote to him. A delegation of the Delhi State Gurdwara Management Committee visited Puri recently and met the Puri district collector who assured them that the two mutts would not be demolished. However, when they asked for a written assurance, he dismissed them,” said historian and chronicler Anil Dhir.

As per the ‘demolition list’ prepared by the state government, many more heritage structures having symbiotic and historical links with Jagannath temple will be demolished over the next few weeks.

These include the Markandeshwar Sarovar (where pilgrims have a bath before going on a darshan of Bhagwan Jagannath), the Baseli Mandir, Kapal Lochan Mandir, Bada Chata Mutt (which performs kirtans in the Jagannath temple at specific times), Radha Ballabh Mutt (associated with Acharya Nimbarka), the Utar Parswa Mutt, Balaramkota Mutt, Raghaba Das Mutt, Dakhina Paraswa Mutt, Kousalya Das Mutt, Sanachata Mutt and the Nepal, Manipur and Assam Bhawans, where pilgrims from these states had been putting up.

Puri is witnessing perhaps the most wanton, cruel and mindless destruction of heritage and history in post-Independence India. The mahant of the demolished Emar Mutt, Rajagopal Ramanuj Das, says that only during the reigns of Islamic tyrants were Hindu religious institutions destroyed in such a manner.

Govardhan Peeth Shankaracharya says that the demolitions have a larger and more sinister motive and are a conspiracy against Sanatana Dharma. But there is little they can do to stop the giant yellow-coloured bulldozers striking barbaric blows to the heritage structures that are being turned to rubble.