All You Should Know About Rajmata Vijaya Raje Scindia, A Stalwart Of The Jan Sangh And BJP 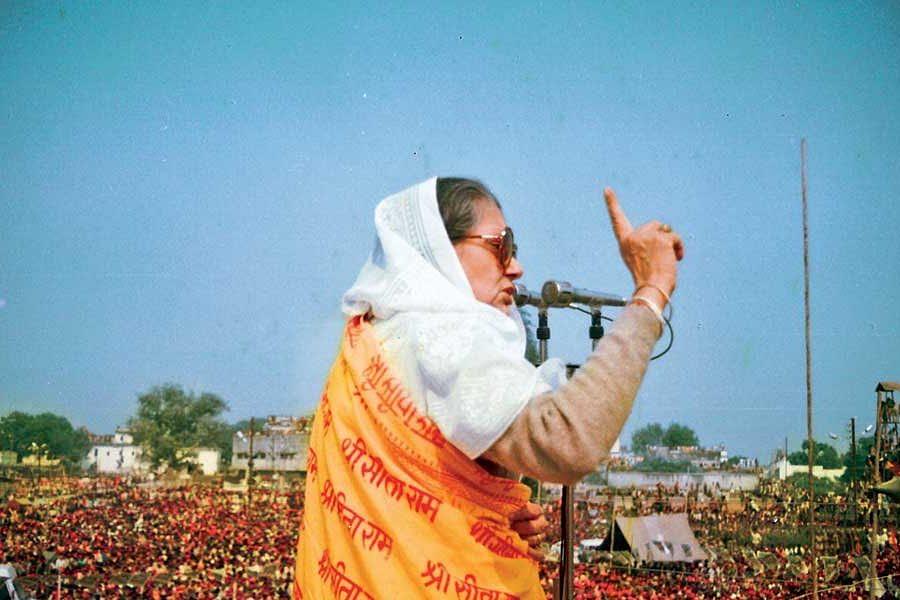 If ever a history is chronicled about bravery and leadership of women icons, Madhya Pradesh will be accorded some prominent pages. The state has the proud legacy of being a home to brave heroines.

One still remembers Rani Durgavati of Gondwana, who routed the strong Mughal army of Akbar when the empire was at its zenith. Another braveheart, Avantibai, queen of Ramgarh, showed her might when the 1857 revolt broke out, by raising an army and leading it herself, which defeated the British forces.

However, the brute strength of the British army impeded Avantibai’s guerilla warfare. Both Durgavati and Avantibai chose sacrifice when the tide of the battle turned against them instead of bowing before the enemies. These heroines transitioned from the role of bravehearts to that of legends.

The last century was not that different for the history of Madhya Pradesh as it witnessed the transition of a common citizen first to a monarch and then to a successful politician.

That historical personality was the Maharani of Gwalior, Vijaya Raje Scindia.

From Commoner To The Crown Of Gwalior

Born Lekha Devi, Rajmata was raised by her grandmother. Lekha Devi spent her childhood as a common civilian. At a young age, she took part in the freedom struggle while continuing her studies in Vasantha College, Benares, and then Isabella Thoburn College, Lucknow.

Even in those days, Lekha Devi made an impression on people around her by projecting confidence and a hearty persona. These were the qualities that caught the attention of the Maharaja of Gwalior, Jivajirao Scindia.

It is said that on their first meeting, Jivajirao made the resolve to marry Lekha Devi. The marriage between a king and a commoner raised many questions, but Lekha Devi, now Vijaya Raje, through her diligence and intelligence, quashed all doubts.

One of her most notable achievements as Maharani was the founding of the Scindia Kanya Vidyalaya (SKV) in 1956. The SKV paved the way for an all-rounded Indian education of girls, stressing on Indian values, religion, and culture.

The progress of science along with industrialization it brought, changed the old pattern of family life. Because of economic conditions, Indian women had to come out, (and) also add to the family income. I believe in the old adage, ‘the hand that rocks the cradle rules the world’. I wanted a school to strengthen those hands. My dream was to start a school which would serve both these ends.

A pioneer in social reform, she showed the same dedication to the people of Gwalior throughout her life.

The Rajmata’s next phase was her entry into politics, which in itself was very dramatic. During the 1950s, Gwalior was a Hindu Mahasabha stronghold as the party was patronised by Maharaja Jivajirao Scindia. This scenario displeased the Congress leadership and rumours started spreading that the grand old party may take drastic steps to create troubles for the Maharaja.

Since Jivajirao was busy in Mumbai with personal work, the Rajmata herself took the decision to meet prime minister Jawaharlal Nehru and explain that the Maharaja was not anti-Congress. The prime minister told Rajmata that all doubts would be cleared if Jivajirao fought the Lok Sabha election with a Congress ticket.

When Rajmata managed to convince Nehru that Jivajirao was not going to enter the political sphere, the prime minister asked her to stand in his place. The prime minister was adamant, so Rajmata agreed and won from Gwalior. But this political alliance, which was made to prevent the Congress from inconveniencing Jivajirao, did not last long.

After having major clashes with the then chief minister of Madhya Pradesh, D P Mishra, before the 1967 election, Rajmata Scindia left the Congress and contested for the state assembly from the Jan Sangh while fighting for Parliament on the Swatantra Party ticket (by that time the Lok Sabha and assembly polls were not delinked).

She won both the polls and decided to hold on to the assembly seat, formally joining the Jan Sangh.

Rajmata’s entry into the Madhya Pradesh assembly made way for a political twist. Because of Mishra’s hostile style of functioning, the state unit of the Congress party was very disappointed with him.

This disappointment took the shape of a massive exodus as 36 members of the Congress party defected to the opposition, bringing down the Mishra government, and Mishra was forced to resign by the party high command, thereby making Madhya Pradesh ‘Congress-mukt’ for the first time. It is well-known that Rajmata was the architect of Mishra’s dismissal.

A non-Congress government was formed under an alliance named Samyukta Vidhayak Dal (SVD), whose chief leader was Rajmata herself, with former Mishra colleague Govind Narayan Singh as chief minister.

Sadly, this new alliance, based on revenge, also did not last. After 20 months, Singh broke the alliance and returned to the Congress fold. The Jan Sangh, however, became an influential party in the state, and Rajmata, one of its most popular leaders.

And under her leadership, the Jan Sangh resisted the Indira Gandhi wave in the 1971 Lok Sabha polls, winning three seats in the Gwalior region — Rajmata from Bhind, her son Madhavrao Scindia from Guna, though he later left the party, and Atal Bihari Vajpayee from Gwalior.

It is believed by some historians that the Indira Gandhi government abolished the Privy Purse of the royal families to undermine well-liked royal figures like Vijaya Raje Scindia, but that did not dissuade the Gwalior queen, whose popularity went on to rise.

Her next clash with the Indira Gandhi government came during the Emergency when she was interned in Tihar Jail. Her fellow prisoner was another popular royalty hailed as a Rajmata: former Maharani of Jaipur, Gayatri Devi. Both the Rajmatas were not restrained in their disapproval of Gandhi’s autocratic methods.

In the case of Scindia, however, the prime minister had an ulterior motive. Like her father convinced Rajmata to join the Congress to keep Jivajirao out of trouble, Gandhi compelled Vijaya Raje’s son, Madhavrao Scindia, to leave Jan Sangh in exchange for his mother’s well-being.

Like his mother, Madhavrao contested from Guna constituency as an Independent candidate backed by the Congress and won the seat in spite of the wave in favour of Janata Party. In the 1980 election, he officially joined the Indian National Congress and won from Guna for the third time.

In 1984, he was nominated as the Congress candidate from Gwalior against future prime minister Vajpayee. Rajmata unwittingly helped her son, although she campaigned for Vajpayee.

During the campaign, she requested the electorate to ensure that the prestige of Scindia family stay intact; even though it was meant for Vajpayee, the electorate thought she meant it for Madhavrao and ensured he won with a massive margin. However, Rajmata’s popularity in the region stayed the same.

Her complete dedication to the welfare of her people and politics left little time for Rajmata to bond with her children, more so after Jiyajirao’s death in 1961. In her autobiography, she sorrowfully narrates how little sympathy she was able to extend to her two younger daughters in their troubled marriages.

Her clash with her only son, Madhavrao, was more widely known. But all her children, Vasundhara Raje (former chief minister of Rajasthan), Yashodhara Raje Scindia, and even the late Madhavrao credited her for shaping their political journey. They all credit her for instilling confidence in them, which led them to political success.

In the words of late prime minister Vajpayee, she was an ideal political activist.

As a part of the Bharatiya Janata Party (BJP), she won from Guna in 1989, retained the seat in 1991, 1996, and 1998. In the BJP, she also played a primary role in leading the Ram janmabhoomi movement. She took it upon herself to meet and provide hospitality to the karsevaks who visited the Gwalior region.

In 1999, she retired from active politics, but still acted as one of the pillars strengthening the party in Madhya Pradesh, the result of which is the strong presence of the party in the state.